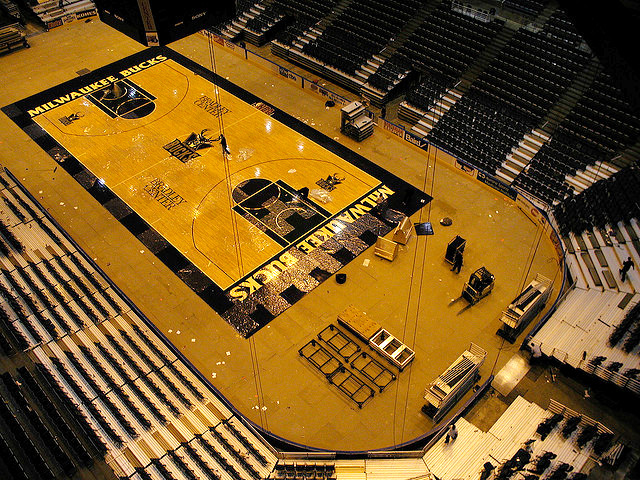 Workers in the Bradley Center prepare the arena for a Milwaukee Bucks game.

Conservatives Might Use Decision As Political Cover To Reject Bonding Proposal In Budget
By Shawn Johnson
Share:

It might be tougher for Gov. Scott Walker to get the Legislature's approval on a new Bucks arena deal after Walker’s administration rejected the latest Kenosha casino proposal.

The plan unveiled in press conferences on Tuesday called for the Menominee Tribe and Hard Rock International to cover the state's share of $220 million in bonding for a Bucks arena in exchange for Walker’s approval of a proposed casino project. Walker Department of Administration Secretary Mike Huebsch rejected the plan almost immediately.

The decision angered some of the southeast Wisconsin Republicans who were pulling for the casino. State Sen. Van Wanggaard, R-Racine, said he'd remember it as he decides whether to support state bonding for the Bucks.

“It makes that decision a whole lot different decision on where I'm going to be in the ‘yes’ or the ‘no’ column,” said Wanggaard.

The decision could provide political cover for some conservative lawmakers who want the casino but don't want state government to finance a professional sports arena. Huebsch said that presumes this latest casino offer was viable. He contends it was not.

“If you don't like what the governor's put forth, that's fine — discuss some other way of doing it. But don't then hang your hat on the fact that ‘Oh, well, we could have gotten it from this.’ That just wasn't going to be the case,” said Huebsch.