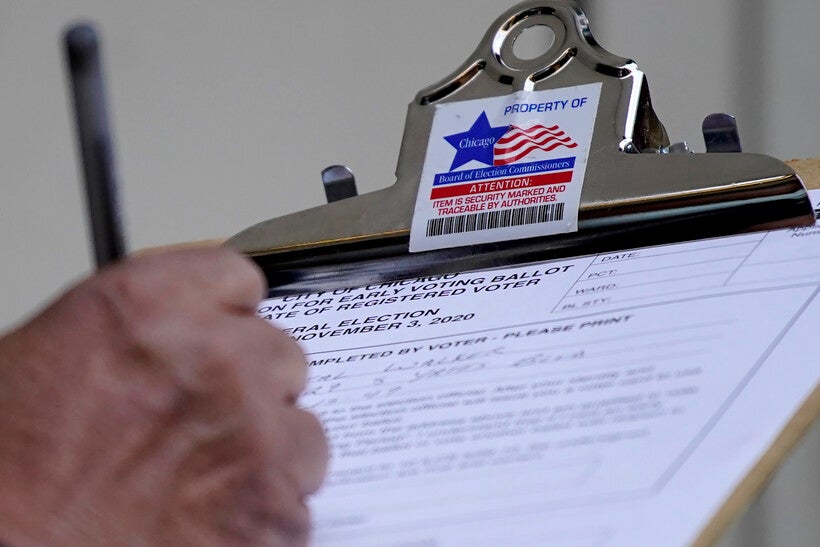 A man fills out voter registration card outside the Loop Super Site in downtown Chicago, Sunday, Oct. 11, 2020. It is the only location allowing early voting in the city right now, but early voting will expand to locations in all 50 wards on Oct. 14. Nam Y. Huh/AP Photo

Record spending by outside groups in Wisconsin's political campaigns

Outside groups trying to influence the outcome of Wisconsin's elections spent a record $52 million in the lead-up to next week's vote.

That's a 43 percent increase over the previous record spending year in 2018. And there are still eight days to go until the end of the campaign, so money is continuing to flow in.

"It's going to shatter the previous record by at least 50 percent," said Matt Rothschild, executive director of the Wisconsin Democracy Campaign, a campaign finance watchdog group.

According to an analysis by the Wisconsin Democracy Campaign, groups promoting Republican candidates have spent nearly $40 million this year, more than three times more money than groups supporting Democratic candidates.

It also does not include several million dollars spent on "issue ads" that target candidates without explicitly telling viewers who to vote for or against.

Rothschild said the lack of limits on outside spending means that wealthy individuals not from Wisconsin have an outsized influence on the state's politics.

The top spender was Right Direction Wisconsin PAC, which spent $9.29 million as of Monday. Run by the Republican Governors Association, the PAC spent that money on broadcasting and digital ads focused on the race between Gov. Tony Evers and Republican businessman Tim Michels. The ads attacked Evers on tax and crime issues.

Americans for Prosperity — the right-wing group created by brothers David and Charles Koch — spent $6.36 million on broadcast and digital advertising, canvassing and mailings to back Michels and other GOP candidates in races for attorney general and the state Legislature.

Only two groups promoting Democratic candidates — A Better Wisconsin Together and the Wisconsin Conservation Voters Independent Expenditure Committee — were in the top 10 among those groups spending in the state. A Better Wisconsin Together spent $3.4 million, including on television advertisements critical of Michels' stance on abortion access. Wisconsin Conservation Voters spent $3.8 million, often on advertisements praising or criticizing candidates stances on environmental issues.