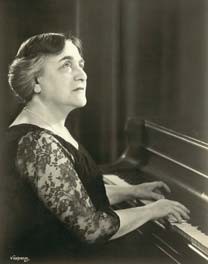 According to its producer, The Ford Sunday Evening Hour was a way for radio audiences “to feel cultured without really being so.” Beginning in 1934 it provided classical music, popular opera arias, familiar ballads, and hymns. Henry Ford hired most of the Detroit Symphony as the house orchestra. The conductors were some of the best--Sir John Barbirolli and Fritz Reiner. The soloists were the finest, although, in the case of pianist Myra Hess, the encounter with radio was not graceful.

Hess was booked to play Edvard Grieg’s Piano Concerto in A minor for a March 7, 1937, broadcast. A representative of the Ford Motor Company suggested a fee of $3,000.

It was a fortune. “That’s ridiculous!” Hess declared.

Taking her surprise for disappointment, the man from Ford said, “All right then. Make it $4,000.”

The rehearsal was timed so precisely that Hess got rattled. She went back to her hotel suite, shut herself up in the sitting room, and practiced until it was past time for her to leave for the broadcast. When she got up to go, she found that the door had jammed, trapping her in the room. With the aid of a friend, she forced the door open, did a quick change, and managed to get to the concert hall on time--barely.

The orchestra was already playing an overture as she was led to a small gilt chair on the stage. When the overture ended, she stood up and headed toward the piano, but she was only halfway to it when the time-conscious conductor signaled for the drum roll that began the concerto. She made what was described as “a running dive” for the keyboard and got there just in time to hit the dramatic opening chords.

The ordeal had its compensations. After the broadcast Myra Hess told a backstage policeman that no one had any right to the outlandish fee she was getting for performing the radio concert.