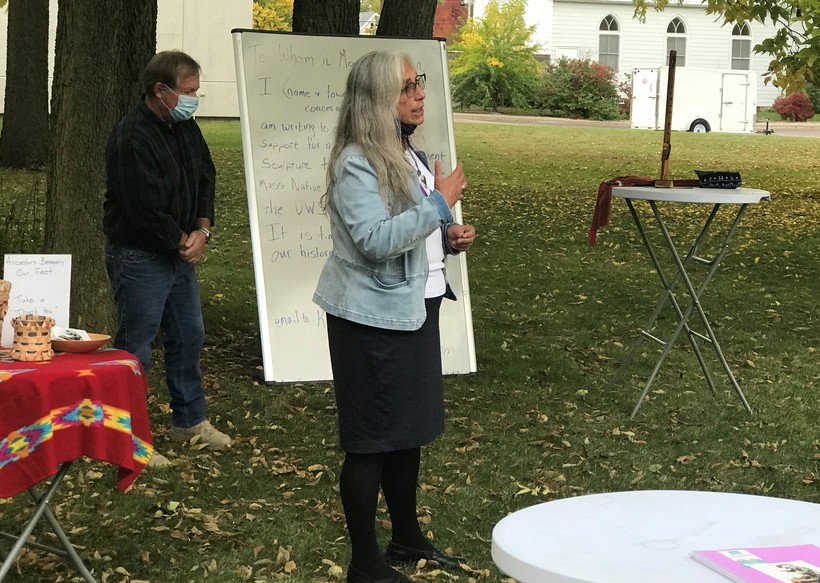 Karen Ann Hoffman speaks to supporters at a letter-writing event Thursday, Sept. 24, 2020, calling on state and university leaders to mark the site of a Native American burial ground on the campus of the University of Wisconsin-Stevens Point. Rob Mentzer/WPR

As Many As 100 Native Americans Were Interred At A Site That Is Now The University's Campus
By Rob Mentzer
Share:

In 1863, a pandemic swept through central Wisconsin, killing as much as 10 percent of the population of a Native American encampment outside of Stevens Point.

The land where they were buried would become state property, and three decades later it would be the site of Old Main, a building on the University of Wisconsin-Stevens Point campus. But the people who died there would be forgotten, their gravesites unmarked.

Now a group of activists is working to install a memorial for the Native American burial site. They say the time has come to recognize the history beneath the feet of countless students, faculty and visitors to the campus.

"The timing for this is absolutely now," said Karen Ann Hoffman of the Oneida Nation, who is a leader in the effort to create a memorial at the site. "The parallels between the pandemic that those people suffered in the 1860s and the COVID situation we have now are undeniable. ... People are aware; they are sensitive; they are receptive. And I truly think that's what those ancestors are telling me: 'Now is the time for our message.'"

On Thursday evening, Hoffman and a group of about a dozen people gathered outdoors in Stevens Point to write letters of support for the project, which will require approval from the UW System and perhaps state funding. Their goal is to demonstrate an outpouring of local support for the memorial, which they say should be created by a Native American artist.

UW-Stevens Point anthropologist and researcher Ray Reser said few students through the years have even been aware of the site's history.

"Thousands and thousands of students have walked over that ground," Reser told the group. "I was a student there in the early '70s, and I had no idea I was walking over Native American burials. ... Our goal now is to create a permanent acknowledgement on that spot." 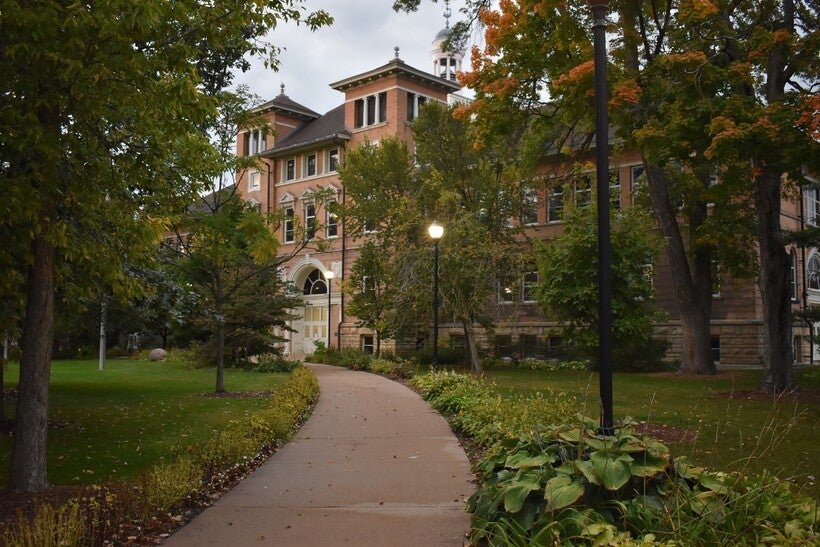 Old Main, on the campus of the University of Wisconsin-Stevens Point, was built on land that is a Native American burial site. Rob Mentzer/WPR

Reser learned about the site’s history in 2016, when a colleague showed him a newspaper story from the 1930s that described the discovery of human remains on the site, including quotes describing a Native American burial site there. Reser researched archives, historical records and Indian tribes' oral histories to form a story about what happened there.

Stevens Point, then a logging outpost, had been founded in 1858. But the arrival of European settlers in the region had begun much earlier, and many Native peoples had already been displaced by American settlements to the east. There were bands of tribal groups moving around the state throughout the early 1800s, seeking permanent homes or simply trying to avoid American settlers. By 1863, a large group of Native Americans had a camp outside of Stevens Point, Reser said — perhaps as many as 1,000 members of the Menominee and Potawatomi tribes.

Scarlet fever was a leading cause of death among Americans in the 19th century, particularly children. But Native populations had no immunities to European diseases, and they died in even higher numbers. When the disease hit the encampment outside of Stevens Point that year, as many as 100 Natives died.

"They were interred right where they camped," Reser said. "And that turns out to be right behind Old Main."

Archeologists have found evidence of Native Americans living in what is now Wisconsin dating back more than 10,000 years. By the 1800s, the Menominee were the most populous American Indian nation in the territory that would become Wisconsin, which was also home to the Ho-Chunk, Ojibwe, Potawatomi and others. Thousands were driven from the region as a result of forced treaties, and more were removed by the United States government following the 1832 Black Hawk War.

Hoffman, a nationally recognized artist for her Iroquois raised beadwork, told the group of supporters assembled in Stevens Point that she hears the voices of her ancestors.

"As a Native woman, I cannot turn my back on these voices," she said. The memorial could serve to honor them, she said, but also to teach others who visit the site, "so that the mistakes we made with them, we don't have to make again."

In an interview, Hoffman said the effort has received plenty of community support — and that it's time for leaders to translate their passive support into action.

"This marker has the opportunity to address all of that (history) and make all of us better human beings," she said. "I think that's what those dead ones want."