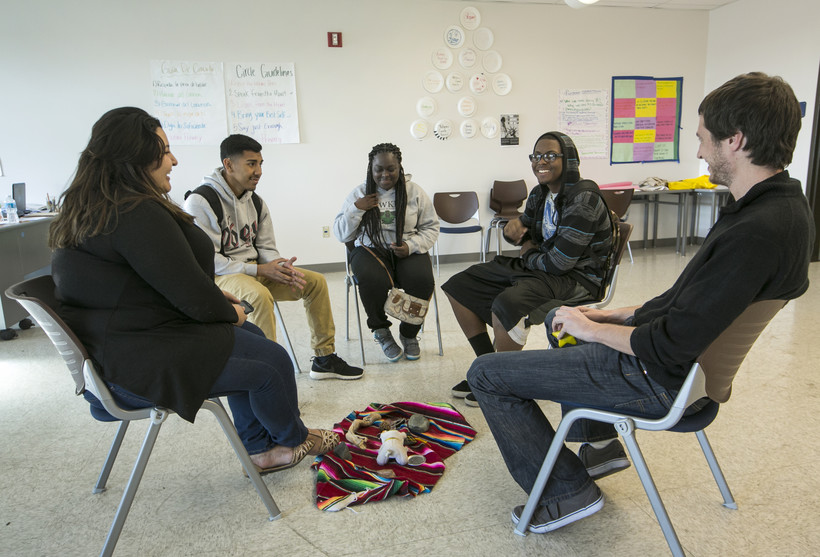 In this photo taken Monday, Dec. 15, 2014, high school students attend a circle session at restorative justice class at the Augustus F. Hawkins High School in Los Angeles. At Los Angeles Unified School District, the suspension rate has dropped from 8 percent in 2008 to 1.5 percent last school year. The decline came amid a district and nationwide push to stop punishing children by removing them from class for minor disruptions, costing them important time in the classroom and potentially affecting lifelong academic achievement. In Los Angeles, one of the biggest alternatives to suspension in schools now is restorative justice. Damian Dovarganes/AP Photo

Lee Namtvedt was feeling a host of emotions when he got a letter from Barry Near.

In the letter, Near said he wanted to meet with Namtvedt, who was about a year into his 10-year sentence for driving drunk one night in March 2010, crashing into another car and killing its driver, Near's son. That first letter was only the beginning. Near and Namtvedt continued to exchange letters and calls for about a year before they met. All those communications were organized and facilitated by the Barron County Restorative Justice Programs, which promotes healing among offenders and victims of crimes.

"Since (Michael Near's) death, I had been devastated by what I had done," Namtvedt said. "I wanted to be able to make amends and I hoped that this conference would give me that chance."

Namtvedt, 43, is one of more than 10,000 people in Barron County over the past 22 years who have gone through restorative conferencing, when an offender and victim of a crime meet and talk through their experiences to get on track toward healing.

Restorative conferencing is one of 10 opportunities through the Barron County Restorative Justice Programs. Others include school outreach, vape and e-cigarette prevention and responsible decision-making.

In contrast to the punitive justice system that doles out prescribed consequences if certain rules are broken, restorative justice is a theory that focuses on repairing the harm caused by the crime, said Monika Audette, program operations leader of Barron County Restorative Justice Programs, which is funded primarily through Goodwill Industries of North Central Wisconsin.

Although some critics may discount the program as merely "feel good," Mary Hoeft, a restorative conference facilitator in the county, said about 75 percent of offenders who go through the regular court system will reoffend; that's true for only about 20 percent who go through this program.

Audette and Hoeft wrote a book about the program that was published in December. "From a Single Pebble: Barron County Restorative Justice Programs" tells stories of participants in the Barron County program and explains the healing that can come from these connections, including Namtvedt's experience.

In their conversations, Near shared that his son, Michael, grew up on a farm. He was involved in high school and the family's church, which hosted alcohol-free parties to give kids alternatives to drinking. Michael was closely involved in that, Near told Namtvedt.

Namtvedt told Near about himself, his upbringing and what led to him becoming the person who drove drunk that night.

"Barry forgave me," Namtvedt said. "And by him being able to forgive me, it just fundamentally changed my life. And this would not have been possible if it wasn't for the Barron County Restorative Justice project allowing this."

Hoeft said she and Audette wrote the book to help other counties establish restorative justice programs and provide that outlet for offenders who may be carrying guilt with them.

"We want counties to realize these are low-cost (programs)," Hoeft said.

Restorative conferencing is a type of process where victims of nonviolent crimes meet with offenders in a safe environment, and are on either side of a facilitator, who sits in the middle.

Offenders are referred to the program by more than 30 agencies in the county, including social services, courts, police departments and counseling agencies. Once that connection is made, Audette said the offenders need to show they are accountable for their behavior and that they are empathetic before moving forward.

Program facilitators first meet with the victims and offenders individually, and there's much communication that's done before the two parties meet in person.

In interviews with the offenders, facilitators ask questions to gauge whether they've taken accountability for their actions. They also ask the offenders what they think reparations should be for the crime they committed.

"I think a big part of that, often, is being able to say directly to someone, 'I'm sorry for what I did to you,'" Audette said. "We don't always get that chance in the regular court system."

There's a lot of preparation that goes into planning the meetings. Sometimes, the victims and offenders will write letters or talk on the phone first, like Namtvedt and Near.

"Some crimes take longer for people to be prepared for, especially in the case of ... vehicular homicide," Audette said. "Those often take many months for people to prepare, and heal, and be in the right place to take that dialogue forward."

Hoeft said in about half of the cases she's worked on, victims take some convincing before being willing to speak with the offenders.

As a facilitator, Hoeft finds out what the victims want from their offenders in order to help in the healing process. In one case of a stolen vehicle, the victim asked for $8,000, which was the amount of money her insurance company had to pay out, and she wanted her three offenders to complete a few hundred hours of community service in total.

"I draw up the contract, the victim and offender agree to that contract, and (Audette) oversees it," Hoeft said. "When all of the money was paid back, and when all of the community service was done, the program was complete."

For participants of the program like Namtvedt, the restorative conference changes their lives' courses. Namtvedt now sits next to Michael's sister, Angel, on victim impact panels as they share their pain and forgiveness.

Without that, Namtvedt said, "I think there would have been a lot of bitterness and anger and resentment. And I don't have those things today because of what we were able to achieve through the process that we went through."

22 Years Of Restorative Justice: What We Can Learn From Barron County 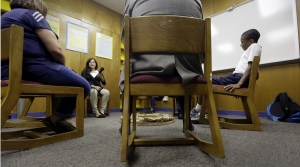 Barron County in northwestern Wisconsin has used restorative justice programs since 1999. We discuss the initiative's methods and effectiveness, and what other communities should know before adopting similar strategies.