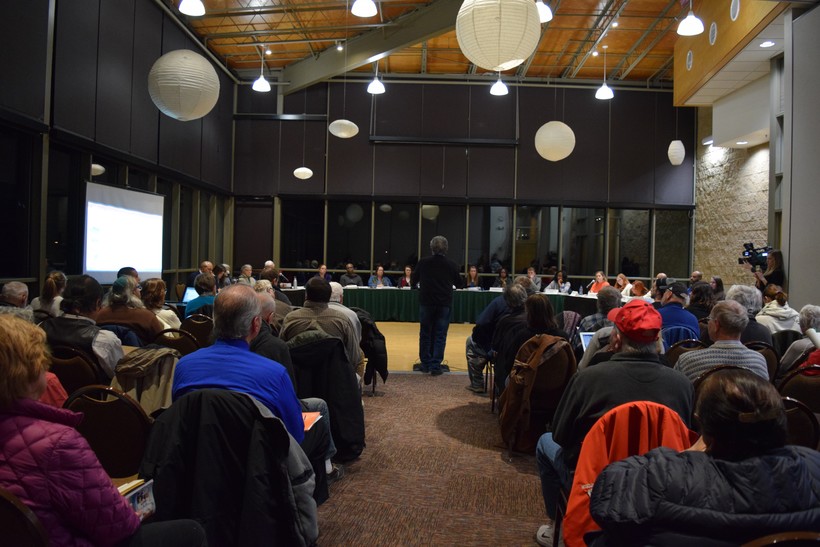 The monuments are located in Forest Hill Cemetery, which is city-owned. City officials are considering options such as removing the monuments or adding another monument or signage offering historical context.

The joint meeting of the city Landmarks, Park, and Equal Opportunities commissions opened with a statement from Landmarks Commission Chairman Stuart Levitan. He asked attendees for a civil meeting.

There were originally two Confederate monuments at Forest Hill, but in August, Mayor Paul Soglin ordered the removal of the monuments. The city ended up only removing a smaller plaque erected in 1981. The plaque praised the Confederate soldiers buried at Forest Hill, calling them, "unsung heroes."

Soglin's order came after violent protests erupted in Charlottesville, Virginia, over the removal of a Confederate statue there.

The larger, remaining monument commemorates 140 Confederate soldiers who died at a nearby prisoner-of-war camp and a deceased caretaker. The United Daughters of the Confederacy erected this monument in 1906, according to city documents.

"Erected in loving memory by United Daughters of the Confederacy to Mrs. Alice Waterman and 'her boys,'" the monument reads.

Kathy Walsh, a longtime Madison resident, was the first speaker to call for the full removal of the monuments. She said the large monument, which has the name of the United Daughters of the Confederacy on it, is offensive. She said the organization pushes an alternative view of the Civil War that minimizes slavery.

"I don't want to denigrate the people who died," Walsh said. "I don't know what was in their mind. I leave them respectfully buried, but I don't want the name United Daughters of the Confederacy associated with public space."

She said if they won't remove the large marker, the city should strike the United Daughters of the Confederacy's name from the statue.

Others called for the larger monument to remain in Forest Hill, but they want another monument or marker to add historical context. Tom Garver, a retired art historian, told city officials that this was the best option.

"Leave the monument there, but tell people about this," he said. "Don't take this away; don't sweep it under the rug."

Garver didn't want the plaque returned to the cemetery.

Paul Sherman agreed about not restoring the plaque and leaving the larger monument. But, he said, he doesn't want any additional historic information.

"I don't think that we need to have a historical debate within the confines of the cemetery," Sherman said. "Let’s just leave these soldiers' markers as they are so they're identified as human beings who are buried there like everybody else in the cemetery."