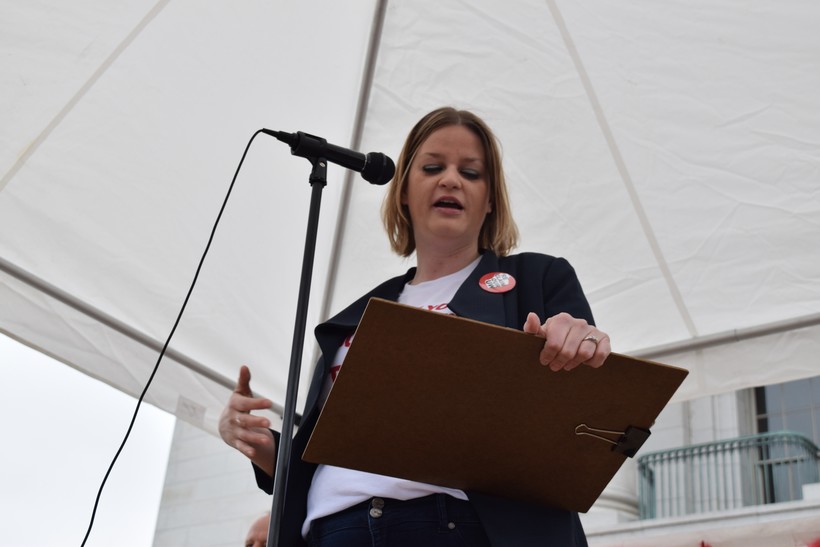 Rep. Katrina Shankland, D-Stevens Point, speaks at a "Reclaim the UW" protest at University of Wisconsin-Madison on Wednesday, May 9, 2018. Marylee Williams/WPR

Sheltering under tents and umbrellas, about 50 people called for legislators to better fund the University of Wisconsin System. This is one in a series of protests focused on funding cuts and tuition freezes at UW campuses across the state within the last several months.

Speakers at "Reclaim the UW" included Democratic gubernatorial candidates Tony Evers and Kelda Roys, as well as other state politicians.

Rep. Katrina Shankland, D-Stevens Point, opened the demonstration. She said the state needs a grassroots effort to force funding of the UW System.

Governor Walker invested an additional $100 million into the UW-System last year because of the critical role the UW plays in educating and developing Wisconsin’s future workforce. We also enacted performance funding in the most recent budget for the University of Wisconsin System to ensure campuses focus on student achievement, students finishing college on time, and college affordability.

To further help students, Governor Walker has worked to make higher education more affordable for Wisconsin students and families by freezing tuition for six years in a row. Financial assistance for students in need is also at an all-time high making higher education possible for thousands of students and at colleges and universities across the state.

Erin Gellings is a junior UW-Stevens Point. Her majors — psychology, and communication sciences and disorders — aren’t being cut, but she said it was important for her to come to the Capitol to support her fellow students. She said students need to band together.

"I think students need to realize this isn’t just an attack on certain majors," Gellings said. "This is an attack on the system as a whole, and if we want to keep that, if we want to preserve the UW System as it is, we need to stick together and have our voices be heard."

Last month, students from several UW schools held a sit-in at the Board of Regents office calling for action to protect academic programs and increase funding.