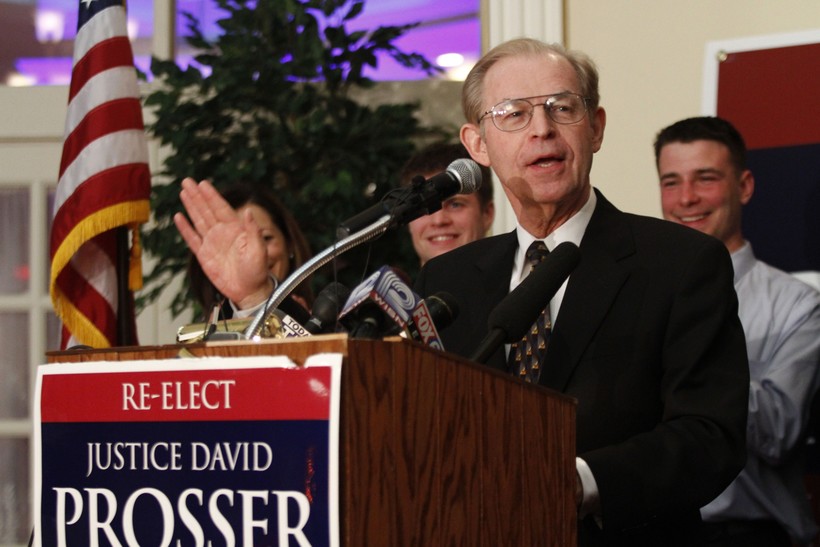 Prosser during his 2011 re-election bid.

Justice Stepping Down With 5 Years Remaining In Current Term
By Shawn Johnson
Share:

Wisconsin Supreme Court Justice David Prosser announced Wednesday that he will step down from the bench July 31 after nearly two decades on the state's high court, setting the stage for Gov. Scott Walker to appoint his replacement.

In a letter to Walker, Prosser said serving on the court was "an honor beyond description."  He called on Walker to appoint a successor who is "fully committed to the important mission of the judiciary."

"Such a person will understand that promoting the reputation and integrity of the institution is more important than the promotion of any individual," Prosser wrote.

Prosser was first appointed to the court by former Gov. Tommy Thompson in 1998. He had a lengthy career as a Republican state legislator before that, serving 18 years in the Wisconsin State Assembly, including two years as Assembly speaker.  Prosser ran unsuccessfully for Congress in 1996.

Prosser's last election to the court in April 2011 was one of the most contentious in state history, falling just months after Walker introduced his plan to diminish the power of public employee unions. The high-turnout race became a referendum on Walker that Prosser narrowly won in a recount.

Chief Justice Patience Roggensack said Prosser's contributions to the Supreme Court and state government "are unlikely to be matched by anyone."

"Justice Prosser also is a man of courage," Roggensack said in a statement.  "His dedication to the people of Wisconsin has been a continuing gift that he gave without reservation."

But Prosser's time on the court was not without controversy.  During an argument with Justice Ann Walsh Bradley in July 2011, he placed his hands around Bradley's neck.  No criminal charges were filed and a formal complaint by the State Judicial Commission was never resolved by the Supreme Court. The incident was the most public example to date of a court whose members are often at odds, both ideologically and personally.

Assuming the governor decides to fill the vacancy, Prosser's replacement on the court could serve there until 2020 without facing election.  Wisconsin's Constitution allows for only one justice to be elected in any year, and other justices are already scheduled for re-election in 2017, 2018 and 2019.

Prosser's departure is unlikely to affect the balance of the court, where conservatives already hold a five-two majority. Walker's first appointment to the court, Justice Rebecca Bradley, won election to a 10-year term earlier this month.

Editor's note: This story has been updated with additional reporting.