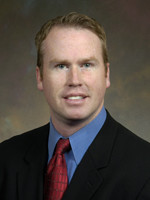 His moment came when the Assembly was about to vote on the bill. The capitol was packed. Loud. Tense. Fitzgerald took the rare step of adjourning for the weekend.

When lawmakers came back, Fitzgerald stood shoulder-to-shoulder with his GOP members to deliver a message, “There's been a lot of protesters here throughout the week. I'm sure there'll be here for the rest of the week. But I'll tell you, the best thing I think happened for us over the weekend is us getting a chance to go back home to our districts and listen to our constituents. And I'll tell you, it was overwhelming the people and the support that are on our side.”

After several days and nights of debate, Assembly Republicans passed the bill. Fitzgerald says it made him “battle tested.” Many of Fitzgerald's Republican colleagues who shared the experience have endorsed him, including budget committee co-chair Robin Vos: “Speaker Fitzgerald ushered in the most conservative political agenda in the history of Wisconsin.”

But Fitzgerald's record is much longer than that. He was first elected to the legislature a dozen years ago. He served a couple years as minority leader where he warned against the kind of single-party control Republicans enjoyed last year: “It's a huge role of the minority to point out that one party in charge can sometimes not be good for a state.”

As a rank-and-file lawmaker, one Fitzgerald's first big bills was an effort by the Tavern League to head off the strict statewide smoking ban that was just around the corner. In 2005 Fitzgerald described it in terms of personal liberties: “I don't think anybody in this room thinks that smoking is good for you. We all know it's a terrible habit. But we also have to weigh what people have a choice of doing in their own lives.”

Conservatives were with Fitzgerald on that issue. Though on others, he was sometimes at odds with his party's base. For example, in 2006 Fitzgerald supported a failed state ethanol mandate. In 2007 he voted for a state budget that paid the bills by raiding a fund for victims of medical malpractice.

But it's the past two years that Fitzgerald wants Republican primary voters to focus on when they choose between hedge fund manager Eric Hovde, former Congressman Mark Neumann, former Gov. Tommy Thompson and him, “You know, I think the difference with me is I'm the Walker conservative in the race. And I think people know that.”

Fitzgerald says that in the Senate he'd make the same kind of tough choices as he did in Wisconsin. He supports Congressman Paul Ryan's budget.

Gov. Walker told the Milwaukee Journal-Sentinel recently that Fitzgerald was the closest to being “absolutely pure” when it comes to his conservative record. But Walker has stopped short of any endorsements.

Likewise, Fitzgerald has found it hard to secure even a sliver of the campaign cash that Walker raised during his recall. University of Wisconsin-Milwaukee Political Science Professor Mordecai Lee says that's made it hard for Fitzgerald to get his message out. “Having influence in the legislative process and being the Speaker does not necessarily translate into being important or powerful or influential out in the real world.”

Fitzgerald is trying to stand out in other ways, namely by not attacking his Republican primary opponents. It doesn't quite fit the mold. The Speaker who strong-armed his agenda in the legislature is trying to win this contest by being the nice guy.