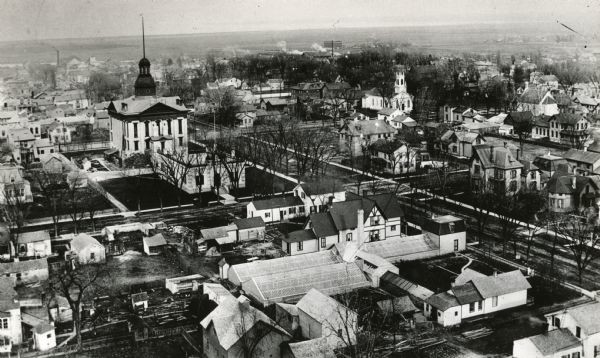 The African-American population in northeastern Wisconsin peaked around 1890, when this photo of Green Bay was taken. Photo courtesy of The Wisconsin Historical Society (WHI Image 31411)

African-American Population Grew Slowly But Steadily In Wisconsin Over The Second Half Of The 19th Century, Peaking Around 1890s, Historian Says
By Scottie Lee Meyers
Share:

On Sept. 22, 1862, President Abraham Lincoln issued a preliminary Emancipation Proclamation, which set the date for slaves to be freed. As the United States reflects on the executive order that provided a "new birth to freedom," a historian said it's important to recognize the deep roots of Wisconsin's earliest African-American settlers.

People of African descent first arrived in what would become Wisconsin as early as the 1600s, either by way of French or independent fur traders, as enslaved people brought over by their European owners, as fugitives from the South or migrants from other free states.

The African-American population grew slowly but steadily over the second half of the 19th century, peaking at around the 1890s, said Victoria Tashjian, professor of African history and women's and gender studies at St. Norbert College.

"I've come across newspaper accounts of gatherings of 300 or more African-Americans in a park in northeastern Wisconsin, socializing together, having essentially a picnic, a get together. So those sort of things certainly happened," Tashjian said.

Sometime in the 1850s, Byrd Parker arrived in Oshkosh by way of Chicago. He owned six lots of property and a restaurant. But his true calling was abolition.

"He came to Oshkosh because he had been hired by Frederick Douglass, the noted abolitionist, to be the Wisconsin and Minnesota distributor of Douglass' newspaper," Tashjian said, noting Parker was often described as being an even more gifted orator than Douglass himself.

Others African-Americans were true entrepreneurs. In present-day Chilton, on the east side of Lake Winnebago, the first non-native settler was an African-American man, a former slave, by the name of Moses Stanton. He arrived with his Native-American wife in the mid-19th century and quickly erected saw and grist mills.

"In fact, Chilton was previously named Stantonville in honor of Moses Stanton, the name was later changed in the 1850s," said Tashjian.

Tashjian said Wisconsin was one of the few Midwestern states that did not enact the so-called "black laws," which were designed to keep African-Americans out. Records show black children were consistently attending public schools in the 19th century.

"Wisconsin, in fact, was the only Midwest state that did not have segregation in its public school system," Tashjian said.

Peter Pendleton settled in what would become Neenah by the 1830s and voted in the first town meeting ever held there in 1847.

"Interestingly, among a host of votes for things like tax assessments and town officials, there was a vote on whether or not to grant what was called 'colored suffrage,'" Tashjian said. "Thirty-four votes were in favor, 13 against. Peter Pendleton would have had to live knowing that about a quarter of his neighbors did not support his right to vote. But he was allowed to vote even though this was before African-American men got to vote in Wisconsin."

Pendleton's son continued that tradition, voting in Allegany County before the right to vote came to him in 1866.  However, Tashjian said it sparked an outcry among white residents.

By the late 19th century and early 20th century, Tashjian said race relations in the country radically grew worse, and there was a "profound backlash" against the gains African-Americans had made after emancipation and the reconstruction era. Suddenly, a new era of police harassment and employment and housing discrimination was ushered in, to put it lightly, Tashjian said.

Additionally, Tashjian said African Americans were driven out of the state as the Klu Klux Klan had a brief heyday in the 1920s, particularly in the Fox River Valley area. Other Wisconsin cities became "sundown towns," which welcomed black labor but only during the day.