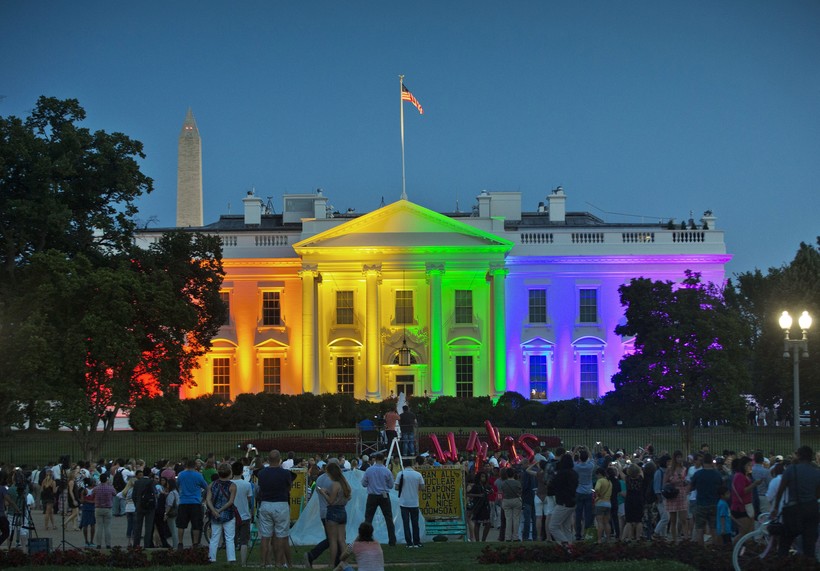 Professor: Homosexuality Embraced More As An Identity Than A Behavior

Sociologist Peter Hart-Brinson saw the 2015 U.S. Supreme Court ruling that same-sex couples can marry — as they're protected under the 14th Amendment — as a symbol of how dramatically the opinions and culture in the U.S. has shifted.

Public support for gay marriage has almost doubled since 2002, and this largely happened because of a change in viewing homosexuality as an identity, not just a behavior, said Hart-Brinson, a University of Wisconsin-Eau Claire associate professor of sociology and communication and journalism.

In his book, "The Gay Marriage Generation: How the LGBTQ Movement Transformed American Culture," Hart-Brinson explores that societal change, which he talks about with Wisconsin Public Radio's "The Morning Show" host John Munson.

John Munson: Let's talk about how gay marriage became accepted in just a few decades. Who should get credit for this change?

Peter Hart-Brinson: The roots of the change go way back to the LGBTQ movement in 1987 and 1988, when activists were reacting to a series of negative changes that affected the community. One, of course, was the AIDS epidemic. The other was a Supreme Court ruling, Bowers vs. Hardwick, which upheld the state's rights to criminally prosecute individuals for the wrong kind of sexual behavior.

In response to those two events, the activists in the movement launched a campaign to change the ways that Americans think and talk about sexuality. And by 1992 or so, these different groups and different activists had been largely successful in persuading the media and the Democratic Party to talk about lesbians and gays as an identity rather than as a behavior.

JM: How did the mindset shift from perceiving gays and lesbians as an identity instead of a behavior?

PHB: There were a series of influential events between 1987 and 1992. Organizations targeted news organizations and popular culture to get them to change the terms in which they talked about homosexuality. Through coverage of the AIDS crisis, the news media learned that the gay community was a much more multi-dimensional community than the simple stereotypes would have suggested. And the mass media began to portray homosexuality as if it was a normal identity equal to heterosexuality.

JM: What is your response to some who say the anti-gay movement hasn't really changed but has just been driven underground?

PHB: There are two different kinds of change that are wrapped up in the change in public opinion. One is the question of whether people have changed their minds.

The other type is a change of generational replacement, which is one of the key forces that caused public opinion as a whole to change over the years. Generational change involves older Americans who have older worldview -- beliefs and attitudes that were formed during an earlier period of American history. These Americans died and were replaced in the population by younger Americans who reached adulthood in a different society.

As Americans who defined or understood homosexuality to be a behavior died, their beliefs died with them. And they were replaced in the electorate by people who held different beliefs and different attitudes about what sexuality is.

JM: One of the things you cite in your book is the research of public opinion. Can you talk about that?

PHB: The single largest predictor of a person's opinion about same-sex marriage is whether or not they believe homosexuality is immoral or not. And over time, those attitudes change right along with the attitudes about same sex marriage.

People continue to seek out religious guidance and spiritual guidance on their opinions about this issue. And it happens on both sides, whether you're supportive or opposed.

JM: What can we learn about the role of generational change in social movements from what happened with gay marriage?

PHB: Regardless of how older Americans are responding to those events, we know that young people are reacting to them in a in a different way and in a way that's probably going to be more enduring than the ways that older adults react.

What's responsible for generational change ultimately is that some historical event triggers something in the minds of young people in their formative years and those formative experiences have a way of shaping people's worldviews almost for life.