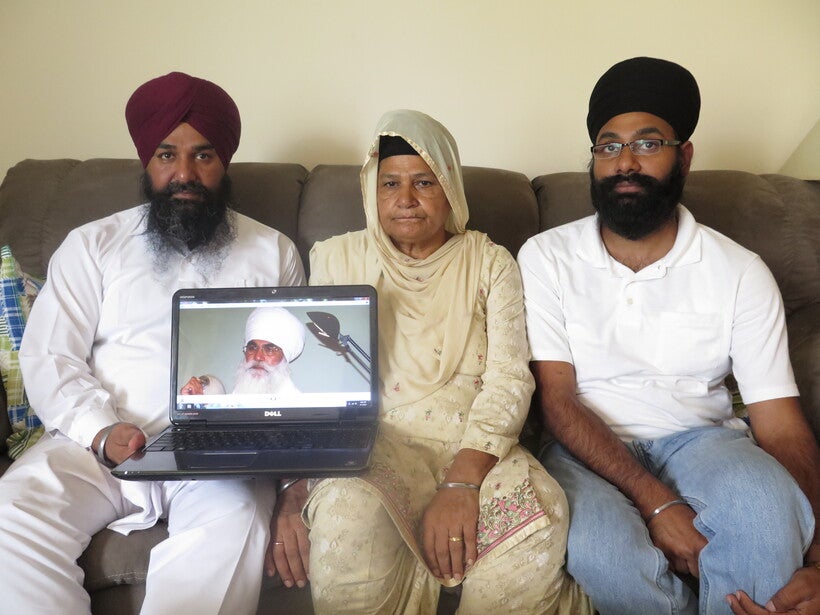 Raghuvinder Singh, left, and Jaspreet Singh, right, pose with their mother, Kulwant Kaur, and a photograph of their father, Punjab Singh, on Friday, Aug. 1, 2014, at Jaspreet Singh’s home in Oak Creek, Wisconsin. Punjab Singh was severely wounded in a mass shooting at his Sikh temple in 2012, and his family says his lifelong teachings of optimism and hope have sustained them through his long, slow recovery. Dinesh Ramde/AP Photo

A priest who was partially paralyzed during the 2012 Sikh Temple of Wisconsin shooting in Oak Creek died Monday.

Baba Punjab Singh, 72, was one of four people wounded eight years ago during the mass shooting where a white supremacist killed six people at the temple.

Singh died from complications of a gunshot wound to the head, the Milwaukee County Medical Examiner Office announced Tuesday.

Singh was shot in the cheek and the bullet exited the back of his head, according to the medical examiner's office. Singh suffered permanent brain and spinal injuries as a result of the gunshot and spent the reminder of his life at the Village at Manor Park nursing facility in West Allis.

"After his injury, he was completely paralyzed and unable to walk, talk, or move at all, causing permanent, long-term disability," according to the medical examiner’s report. "He was still able to communicate with the family by blinking his eyes, so he still could understand what was being said to him." 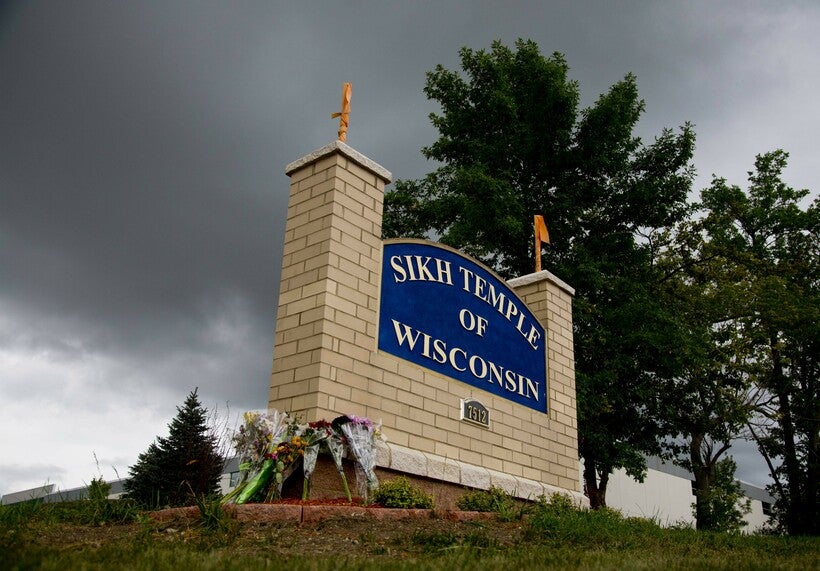 In this Aug 9, 2012, file photo, flowers lie on the sign to the Sikh temple of Wisconsin where members were allowed to re-enter for the first time in Oak Creek, Wis. Six members of the temple were fatally shot by a white supremacist, Wade Michael Page. Page was shot by a responding officer and later killed himself. Jeffrey Phelps/AP Photo

In a statement on behalf of his entire family, Singh's son Raghuvinder Singh said, "It is with sadness, but also peace and acceptance, that we confirm the passing of my father, Baba Punjab Singh. He was a beloved husband, father, and family member to us all, and equally revered by many in our community."

"Baba ji’s capacity for love and optimism was unchanged by the heinous attack in Oak Creek, as well as the life-altering injuries he sustained. Even when I regularly visited him in the hospital after his paralysis, I would ask him: Are you living in chardi kala, the Sikh spirit of eternal optimism? Each time, without fail, he would blink twice to say 'yes.' His resilience embodied the greater Sikh community’s response in the wake of the Oak Creek tragedy, and it was one of the many lessons he continually taught throughout his life."

Stephen Scaffidi was the mayor of Oak Creek at the time of the shooting. He met Singh about a year later when he visited him at the long-term care facility.

Scaffidi said Singh was one of the most respected members at the temple.

"He was someone who was visiting there, came into the country and was working with the temple on education and outreach," Scaffidi said. "He was considered brilliant by most of the people who he worked with."

"He wasn’t one of the people killed that day, but his life was forever changed," Scaffidi said. "I met many of his family members, people of the temple spoke very highly of him. For me, it’s always taking me back to that day and those kind of memories never go away."

The New York-based Sikh Coalition shared several tweets Monday evening remembering Singh. One tweet said Singh's "outlook on life will always serve as a reminder that love is stronger than hate, and that we are strongest when we come together."

1/3 We are deeply saddened to hear of the passing of Baba Punjab Singh.

For more than seven years, Baba Punjab Singh remained partially paralyzed after being shot in the head during the 2012 Oak Creek shooting, which killed six Sikhs and injured many more. pic.twitter.com/OiCYXj7x06