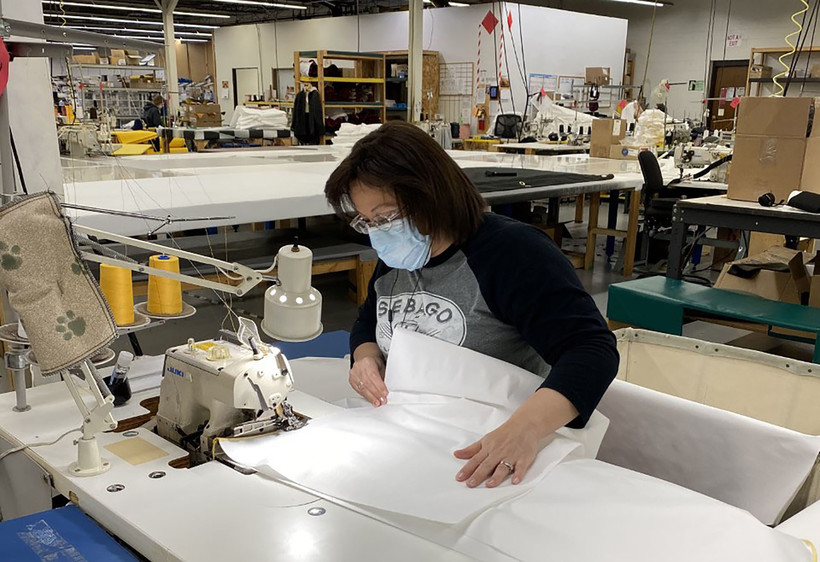 Popular brand name businesses familiar to Wisconsin are stitching together ways to provide protection for first responders and health care workers across the state and country during the coronavirus pandemic.

Businesses large and small have been helping aid in the response as those providing care and emergency services to people have been facing a shortage of personal protective equipment (PPE) for weeks. The Strategic National Stockpile is nearly out of the masks, gowns and gloves needed to protect them.

Kenosha-based Jockey International Inc., which employs around 350 workers in Wisconsin, recently announced it would donate 250,000 gowns to the Federal Emergency Management Agency for distribution to medical facilities and testing sites nationwide. The company known for its production of underwear, socks and other clothing is partnering with Encompass Group in McDonough, Georgia, to manufacture the disposable gowns.

"We felt it important to roll up our sleeves and contribute where we could," said Matthew Waller, a Jockey International spokesperson.

It's not the first time the company has stepped up during a crisis, said Waller, highlighting its production of parachutes for the U.S. military during World War II.

The move came after a request from Republican U.S. Rep. Bryan Steil of Janesville to support the ongoing response. About 30 workers in the state are working on PPE donations, said Waller. As the company ramps up production, officials hope to produce 30,000 to 50,000 gowns per week. Waller said it's already exceeded that amount in its first delivery to FEMA.

"We're hoping that we can turn up the pace even more because we know how critical these are to the first responders and health care workers," said Waller.

Around 10,000 gowns have been supplied to the Jacob K. Javits Convention Center in New York City, which is serving as a temporary care facility during the pandemic. The company has also committed to delivering 10,000 each of N95 masks, gowns and surgical masks to the Kenosha Fire Department. To date, roughly 4,500 N95 masks have been distributed to Kenosha Fire. 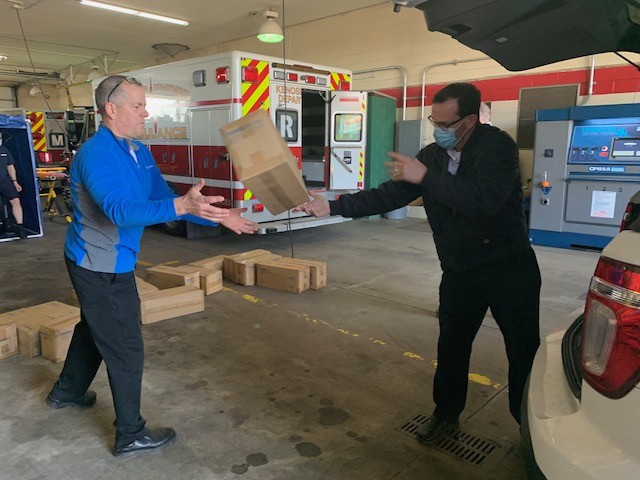 "We have this need now to balance keeping our employees safe coming into work every day, in some cases even working overtime, and balancing the need to do our part to keep American grocery stores stocked with food and the medical profession stocked with PPE," said Bolhous.

The company, which has roughly 600 workers at four plants in Wisconsin, has adapted production to observe social distancing and use of masks. The company has also provided two installments of $500 bonuses to hourly workers who have been working 12-hour shifts.

The company's plant in Bloomer has been producing film for the gowns, as well as disposable flooring for temporary medical facilities. While business has declined from some sectors, the company is seeing new customers requesting PPE. It's also become involved in packaging for COVID-19 lab testing equipment, according to Doug Latreille, the company's chief commercial officer.

He said plants in Superior and Milton have also begun making film for the production of face shields, which was not part of their business six months ago.

"We've got films that we've quickly scaled up with customers that were making other things and have now shifted into making these face shields," he said.

Iconic cap-maker Stormy Kromer, which started out in Kaukana, has also shifted its production in Ironwood, Michigan, from the popular hat to thousands of masks and gowns for hospitals and first responders. President Gina Thorsen said UW Health in Madison was one of the first hospitals to request, design and order masks for their staff.

"Normally, when we have a new product, it might take several months to go from idea to production, and we had a sample of their mask and had it in production in about four days," said Thorsen.

Now, around 50 employees are making up to 3,000 masks and 300 gowns each day for health care workers, first responders and communities in Wisconsin and Michigan. Thorsen said they provided the protective equipment for police and firefighters in Ashland, as well as Marshfield Clinic.

"We really saw this as almost an obligation to take our skills at sewing and cutting fabric and manufacturing and selling products, given the huge need not just in the region, but in the country," said Thorsen. "Even our management team ... there wasn't a conversation like, 'Should we do this or not?' It was sort of like, 'Well, of course we need to do this. Let's figure out how.'"

Requests for PPE have ranged from 100 up to 30,000, said Thorsen, adding demand far exceeds what they're able to fulfill. However, she hopes to call back more of their normal workforce of roughly 90 workers to increase production.

Other businesses that are providing protection for health care workers include Sheboygan-based Franzen Graphics. The company is producing face shields for hospitals and nursing homes, which has already shipped more than 100,000 to medical providers.

It has enough material to produce another 250,000, according to Nick Franzen, chief sales officer and research and development specialist.

"Ours are cleanable, washable with disinfectant or soap and water for multiple uses throughout the day, for as long as they really feel like they last," said Franzen, noting they're also made of recyclable plastic.

While many are providing protective equipment, Brookfield-based EmOpti is providing tele-triage technology to hospitals in Wisconsin and across the country without charge over the next three months. The software enables health care providers to conduct video consultations remotely with patients while protecting physicians and those seeking care.

"If you put that same doctor that would otherwise be sitting at a triage desk in a remote location, they can now do that same kind of consultation and triage with multiple facilities simultaneously," said Barthell.

Instead of treating six to eight patients in an hour, he said physicians can double or triple the number of people who receive care. Aurora Health Care, a nonprofit network of hospitals in Wisconsin, has increased the number of hospitals using the company's technology from five to 14, according to Barthell.

The software is being utilized by hospitals across the country, including Florida, Pennsylvania and New York. He expects the technology will be deployed by 50 hospitals within the next six weeks.

Other companies like Johnson Controls International, formerly based in Glendale, are providing equipment as part of infrastructure development to support the coronavirus response. A Johnson Controls spokesperson said the company is working on projects at 40 sites across the country, including construction of makeshift hospitals.

The company is among several contractors that include HGA (Design), Staff Electric, F. Ahern, and Hetzel Sanfillipo who are working on construction of an alternative care facility at Wisconsin State Fair Park.

"A lot of our products are used by a lot of the first line (responders), especially in hospitals, and so we have seen to help ensure that there's continuity of that supply," said John Perkins, Johnson Controls' vice president of environmental health and safety. "That's another reason why our factories continue to operate and ensure that we provide those types of products."

Johnson Controls, which employs around 3,100 people in the state, produces fire protection, security and heating, ventilation and air conditioning (HVAC) equipment. The company's work has also included assisting with the set up of an alternative care facility at a university in New York and converting a former corrections facility in Minnesota into a medical care center for treatment of up to 300 people.