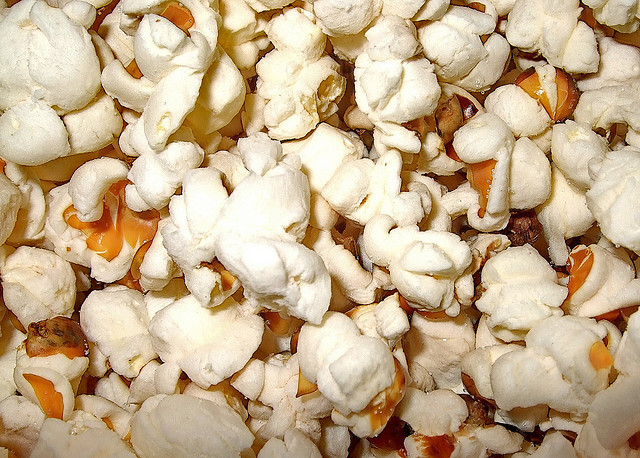 With the right choice of toppings, popcorn can be a healthy and satisfying snack. Photo: Joelle Nebbe-Mornod (CC-BY).

Popcorn: A Snack That's Not Only Satisfying But Healthy Too

Nutrition Educator Shares Thoughts On How To Enjoy The High-Fiber Treat
By Judith Siers-Poisson
Share:

October may be National Popcorn Poppin’ Month, but in reality it’s a snack that’s enjoyed year-round.

And according to Judy Knudsen, a University of Wisconsin-Extension family living educator for Brown County, it’s a snack that’s healthy too.

Knudsen said that popcorn is considered a whole grain, and as a result is high in fiber, which makes it filling. In addition, it is naturally gluten-free — an important consideration for anyone with Celiac disease.

As is the case with many foods, it’s not just the base that counts with popcorn, but what’s added to it. Knudsen said that plain hot popcorn with a little salt or flavoring and maybe a little bit of butter on it is fine.

“But there are some options in popcorn where there is a lot of fat, and a lot of sodium, which makes it not such a healthy snack,” she said.

Knudsen said that while microwave popcorn is fast and convenient, it’s important to read the nutrition label carefully: “There’s a great variance in the amount of fat, as well as the amount of sodium,” she said.

In addition, be sure to check how many servings are in the bag according to the manufacturer. Knudsen said that when comparing microwave popcorn at the grocery store recently, she found one brand with 12 grams of fat listed per serving, and with each bag containing three servings.

“And most of us can eat a bag of microwave popcorn by ourselves,” she said.

When popcorn is made from scratch, it lets people add their own flavors to suit their own tastes. Other than the traditional salt and butter — used in moderation, of course — the Popcorn Board trade association offers several suggestions. WeightWatchers offers some low-calorie popcorn toppings, and SparkPeople has almost two-dozen sweet, savory, or spicy toppings that are less than 150 calories per serving as well.