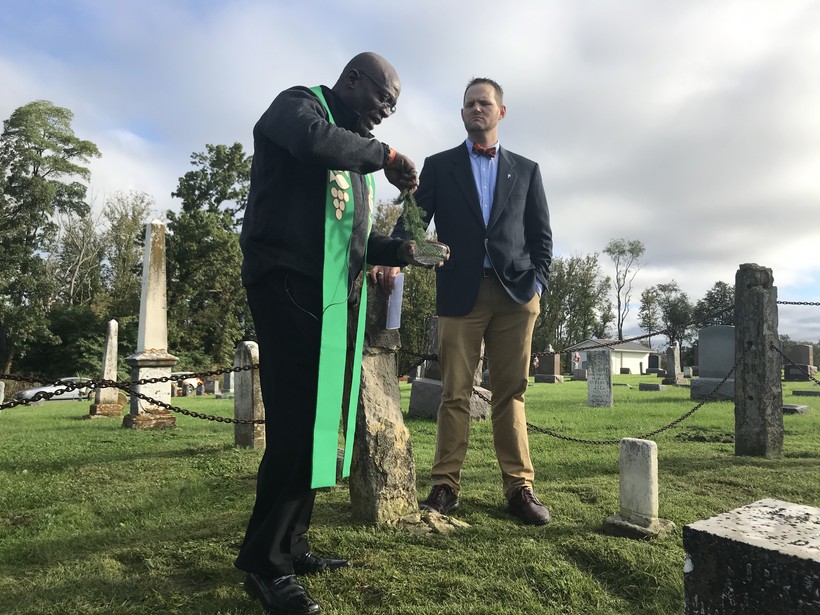 Rev. Gus Barnes, left, baptizes the grave of Rachel, a woman who was illegally enslaved in Wisconsin, while UW-Platteville history professor Gene Tesdahl, right, looks on, during a ceremony on Oct. 4, 2019. Miranda Suarez/WPR

UW-Platteville Professor and Students Work To Make Sure Rachel Is Not Forgotten
By Miranda Suarez
Share:

In the burial plot of Platteville’s founding family, one gravestone is tinier than all the others. It’s about the size of a hardcover book and engraved with an R that's barely visible.

The grave belongs to Rachel, the illegally enslaved woman that John H. Rountree brought to southwest Wisconsin as early as 1828. Rachel worked for the Rountrees as a slave and, after Rountree freed her, as a free woman until her death in the 1850s.

That’s according to research by University of Wisconsin-Platteville history professor Gene Tesdahl and his students, who gathered to rededicate Rachel’s grave last Friday.

About 40 people attended the ceremony, which took place high up in Platteville’s Hillside Cemetery on a cold fall morning. Rev. Gus Barnes of Luther Memorial Church in Delavan said no one knows if Rachel was ever baptized, so he took a pine branch and a crystal cup of water and baptized her stone. Baptism materials rest on a Rountree family gravestone at Hillside Cemetery in Platteville, Wis. Rev. Gus Barnes used them to baptize the gravestone of Rachel, an illegally enslaved woman who was owned by the Rountree family. Miranda Suarez/WPR

"I think Rachel’s history is important because it reveals a truth about Wisconsin that not a lot of people know about, and people who do know about it, they’d rather not focus on it," she said.

So many places in Platteville are named after Rountree, Tesdahl said, and the town needs to confront the reality of slavery.

"I think we need to look at the American past with both the ugly chapters and the lovely chapters," Tesdahl said. "We should think about how we're commemorating (Rountree), and we should definitely commemorate people like Rachel as well."

The ceremony was just the latest step in Tesdahl and his students’ mission to make sure Rachel is not forgotten. Her stone had been knocked over by a lawnmower, so this summer, they pieced it back together and cleaned it. Now, only a crack at the bottom of the stone shows it was ever broken.

Brandon Snyder, one of Tesdahl’s students, called the restoration an emotional experience, and said he’s going to continue to study Rachel’s life. He said census records show Rachel may have been married, so he’s going around to archives and courthouses to try and find other records to back that up.

"This research just inspires more research for me to do," Snyder said.

That research is one way of picking away at the question marks surrounding Rachel’s life. During the rededication ceremony, Tesdahl told the crowd that most of Rachel’s life is still a mystery.

"I wonder more than I know about Rachel. I wonder if she had a funeral. I wonder who was there when this stone was put in place, and I wonder who missed her when she was gone," he said.