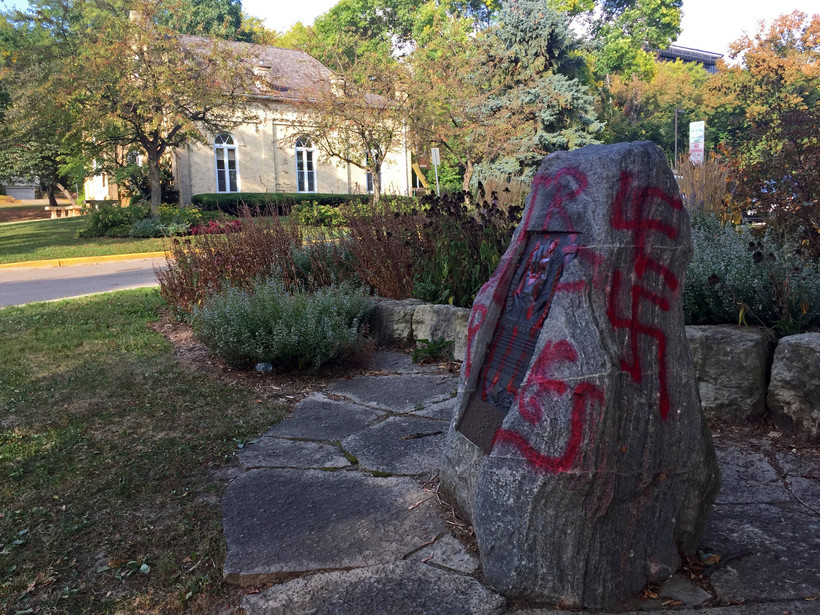 The plaque in Madison's James Madison Park was spray painted with red swastikas and the phrases "Trump Rules" and "Antifa sucks."

Swastikas and the words “TRUMP RULES” and “ANTIFA SUCKS” are seen spray-painted on a memorial near the Gates of Heaven synagogue in Madison, Wis. on Sept. 20, 2017. The vandalism occurred just hours before the celebration Rosh Hashanah, the Jewish New Year. Photo courtesy of Jeff Glaze

Swastikas, Pro-Trump Messages Have Since Been Removed
By Bridgit Bowden
Share:

A plaque in Madison's James Madison Park was vandalized with anti-Semitic and pro-Trump messages. Madison Police were alerted about the graffiti just after 8 a.m. Wednesday. It was removed by the city by approximately 10:15 a.m.

The plaque, which is dedicated to international volunteers who fought against fascism in the Spanish Civil War, was spray painted with red swastikas and the phrases "Trump Rules" on one side and "Antifa sucks" on another. Antifa is an anti-fascist political movement.

The plaque sits next to Gates of Heaven, the fourth oldest surviving Jewish synagogue building in the country, which is owned and operated by the city of Madison. The Jewish new year celebration of Rosh Hashanah begins Wednesday evening, and services will be held at Gates of Heaven.

The exact time of when the monument was vandalized isn't known. The Madison Police Department is leading the investigation into the incident, and there is no surveillance video available. MPD spokesman Joel DeSpain said the act has the potential to be deemed a hate crime, but legally it depends on the intent of the person or people responsible.

"If the intent of the individual was because they don't like Jewish people and they were trying to send a message, that puts us into the area of a hate crime enhancer," he said.

Police have not yet identified a suspect or suspects, he said.

"That kind of vandalism, the kind of bigotry that we're experiencing is obviously something repugnant to 99 percent of the community," he said.

Soglin said he hopes the person or people responsible for the vandalism step forward, but he's more interested in educating them than seeking legal action.

The incident in James Madison Park comes less than a week after the Wisconsin Law Enforcement Memorial outside the state Capitol was also vandalized with spray paint, an incident which is still being investigated by the Wisconsin Capitol Police.