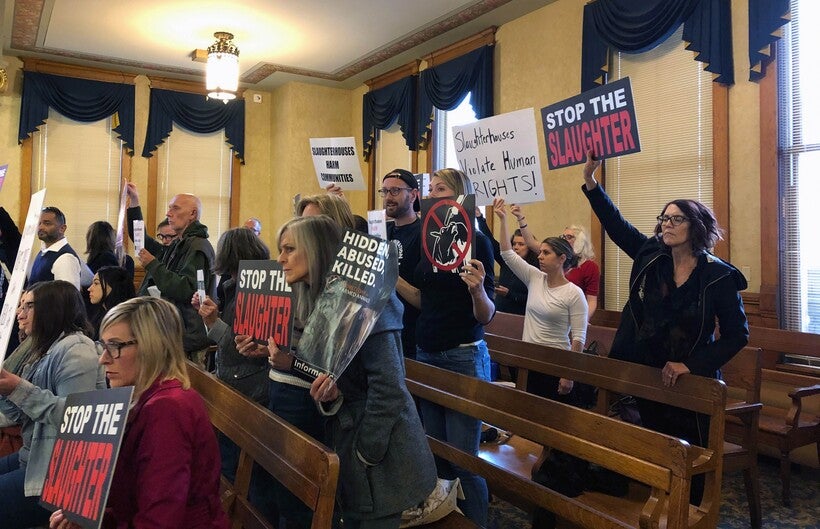 Strauss Brands Would Create Up To 500 Jobs In Century City Business Park
By Corrinne Hess
Share:

Last month, the city of Milwaukee celebrated its ability to lure a large production facility from a nearby suburb to continue its efforts to revitalize a long-struggling central city business park.

But on Tuesday, Milwaukee Common Council members began to reconsider moving a slaughterhouse into the city.

During a tense 10-minute discussion, decades-long hurt that runs through many Milwaukee residents’ regarding racism and segregation again surfaced.

Strauss Brands could bring up to 500 jobs into the Century City Business Park on Milwaukee’s northwest side once at full capacity. The company will also slaughter 500 cows every day starting in 2021.

"Slaughterhouses, chemical plants, oil refineries, foundries, all types of industries that produce noise, and dirt and odor have traditionally had a stigma in central city communities," said Alderman Robert Bauman. "Why? Because those types of negative land uses always seem to end up in poor neighborhoods."

Bauman originally supported Strauss. He and other members of the city's Zoning, Neighborhoods and Development Committee approved the project Oct. 8, including a $4.5 million grant for the company, based on job performance.

Since then, more than 100 people, forming the grassroots group, Slaughter-Free Milwaukee, have sent council members emails protesting the facility. And Bauman said it's time to revisit the proposal.

About 50 members from the group attended Tuesday’s meeting holding up signs protesting a slaughterhouse in the city.

But Alderman Khalif Rainey, who represents the district where Strauss Brands would build, said the $14- to $17-an-hour jobs are needed in his neighborhood, where unemployement, particularly for black men, is especially high.

Rainey fired back at the protesters, who were mostly white, for not being residents of the city. Many of the people who filed petitions against Strauss Brands listed their address as Milwaukee County.

"I see words such as 'slaughter,' I see words such as 'trauma,' I didn’t receive an influx of emails when a mother was killed in a car with her daughter, I don’t see people gathered outside protesting when they see the unemployment statistics for black men and women," Rainey said. "When you talk about trauma, when you talk about PTSD, these things exist in our community. This is what is called selective indignation."

Rainey did support Bauman's motion to review the proposal again. The city’s zoning committee plans to pick the proposal back up at its Tuesday, Oct. 29 meeting.

After the meeting, Balaji Venkatesan, one of the founders of Slaughter-Free Milwaukee, said when a slaughterhouse opens in a neighborhood, crime rates go up and workers have high rates of PTSD.

"Not to mention the environmental impact and unholy stench that permeates the air for hours," Venkatesan said.

In a statement, Strauss Brand CEO Randy Strauss said his company has a strong reputation as a good corporate citizen.

"Strauss Brands is proud of our reputation as one of the nation’s leading suppliers of ethically raised meats," the statement said. "We look forward to working with the city and the community to advance this important economic development project in Century City."

In September, the city announced Strauss Brands planned to move its headquarters from suburban Franklin to the Century City Business Park on the city’s northwest side.

The company is planning to build a build a 170,000-square-foot facility on 20 acres and could initially bring 285 jobs to the area by spring 2021, according to plans submitted to the city.

While downtown Milwaukee and surround neighborhoods have experienced economic revitalization in recent years, the city’s northwest side has experienced stubbornly high unemployment.

Century City was the original home to the now-departed A.O. Smith and then Tower Automotive manufacturing plant, once employing more than 900 people.

The site was acquired by the Redevelopment Authority of the City of Milwaukee at the end of 2009. Since that time, the redevelopment authority has worked to make the 86-acre site ready for redevelopment, although progress has been slow.

Good City Brewing bought a 53,000-square-foot warehouse in Century City in 2018 and moved its office and warehouse to the business park. The brewery also committed to establishing a brewery there within two years.

Strauss Brands decision to relocate from the suburbs to the Century City development was seen as another win for the project.

In a statement, Randy Strauss said the investment by Insight Equity will provide the capital needed to develop the new plant.