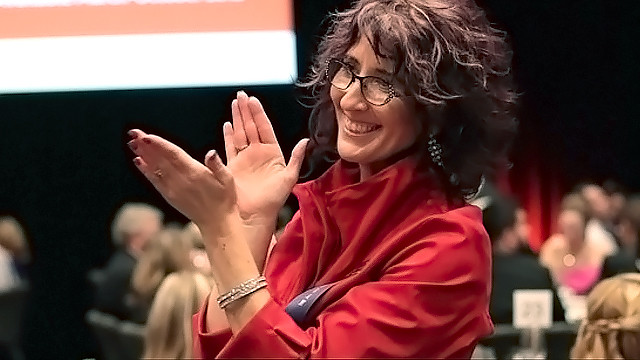 Place Your Bid On This Badger Bidder Caller

Before getting to work, auctioneer Jenny Markham-Gehl warms up with a number cadence. Starting at 10, she counts to 100 by working up and down the scale in quarters, halves and tens, prepping her voice and tempo for the live bidding war.

Because auctioneers need rhythm, too, Markham-Gehl practices with a tongue-twister.

In addition to the numbers and rhythm, auctioneer chants use filler words that help the auctioneer climb the scale to a higher bid. "You able to buy," "would you give," "dollar," "now" and "bid" are common words or phrases Markham-Gehl uses in her chants, but every auctioneer has his or her own.

All the elements of her personalized auctioneering chant come together in money-making performances that have earned her the title of 2019 Wisconsin Champion Auctioneer.

Markham-Gehl, of Genesee, Wisconsin, competed against 11 others for the title she claimed during a convention of the Wisconsin Auctioneers Association on Jan. 27 in Stevens Point. She and 2018 champion Kathy Packard, will compete at the International Auctioneers Competition in New Orleans in July. This is Markham-Gehl's third appearance on the international stage.

"With each contest I meet amazing people and I get the chance to improve, which gives me the drive and incentive to become an even better auctioneer," she said.

Competing offers a chance for Markham-Gehl to learn more about herself and reflect on her stage presence and auction chant.

The state competition won by Markham-Gehl has been around since 1991. It was formerly called the State Fair Bid-Calling Contest, where contestants were judged only on their bid-calling abilities. That changed in 2000, when the competition became a forerunner to the national competition. Since the change, champions of the state contest are selected based on their selling abilities and on their responses to questions about the auction industry.

Each contestant that makes it into the final round is given two minutes to answer two questions related to auctioneering.

Being an auctioneer wasn’t always the end-game for Markham-Gehl, 45. She had her sights set elsewhere with degrees in business and finance, but kept returning to her love of auctioneering that was established at an early age.

Markham-Gehl grew up in her family’s auctioneer business in Dubuque County, Iowa — her father and brother are both auctioneers. Now, she owns Bravo Benefit Auctions and Consulting Group.

She’s focused on fundraising ever since learning the National Auctioneers Association offered a benefit auction specialist certification, which helped prepare her for the specialized industry.

"I thought, 'You know what? This is my thing. I think that’s what I want to do,'" she said, noting that her business works with schools, foundations, humane societies and other nonprofit organizations.

Fundraising auctions require slower chants that are more easily understood by an audience that might be unfamiliar with how auctioneering is typically done.

And at those fundraisers, Markham-Gehl — who also works as a ringman or someone who watches for bids on the floor — is keeping her eyes peeled for raised paddles or bid cards. Traditional bidders might be much subtler, signaling a bid with wink or head nod.

"At the end of the auction I swear I can tell people how many times they touch their hat or scratch their ear because I’m always on the lookout," she said.

It’s the competitive bidding environment that makes auctioneering so attractive, Markham-Gehl said. There’s anticipation and fear from the bidders as they risk being beat, but it’s fun to get them engaged and excited, she said.

Champion Auctioneer On The Art Of Auction Talk 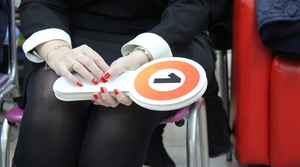 Wisconsin's 2019 Champion Auctioneer got an early start in the busienss, cashiering $300,000 farm auctions in the eighth grade. We talk with her about what it's like to be in such a different field.