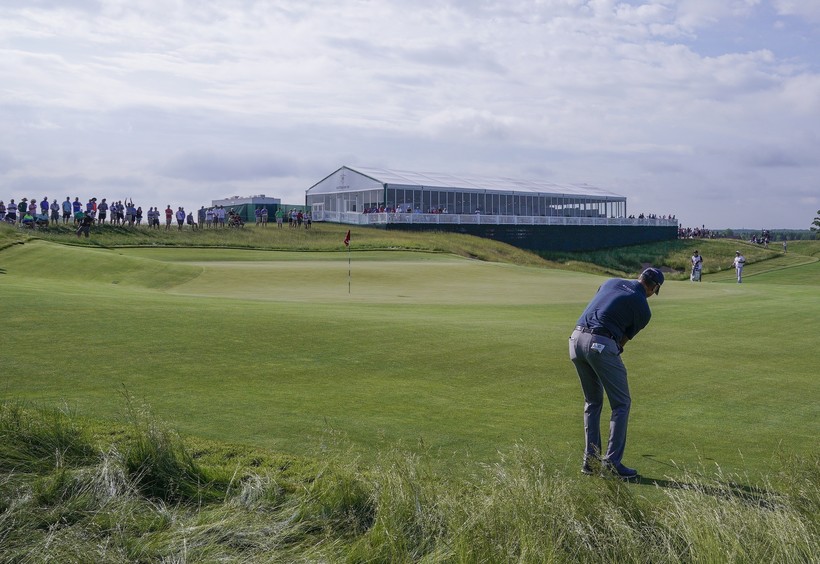 Matt Kuchar hits to the 10th green during the first round of the U.S. Open golf tournament Thursday, June 15, 2017, at Erin Hills in Erin, Wisconsin.

Pilot Seriously Burned After Blimp Crashes At US Open

Authorities say the pilot of a small advertising blimp was seriously burned when the aircraft crashed at the U.S. Open golf tournament Thursday.

The pilot was taken to a hospital by medical helicopter, according to a statement from the Washington County Sheriff's Office.

The pilot of the blimp is "OK" said Justin Maynard, a sales manager for Florida-based AirSign, the company operating the blimp. Maynard had no additional information on the crash that happened during the tournament's opening round at the Erin Hills golf course in Erin, Wisconsin.

The man was the only person aboard the blimp when it deflated, caught fire or started to smoke before crashing near the golf course. The blimp went down at about 11:15 a.m. in an open field about a half-mile from the golf course, according to the U.S. Golf Association

"Our thoughts and prayers are with the pilot at this time," the USGA wrote in a statement shortly after the incident, which is being investigated by local law enforcement, Federal Aviation Administration and National Transportation Safety Board.

Thanks to everyone for your concerns, the blimp pilot is being taken to the hospital but is expected to be ok. No details on cause of crash

The Open, one of golf's four majors, opened play Thursday at the course.

Here's an aerial view of the US Open from the @penfed blimp. #PenFedBlimp #USOpen #USOpen2017 #ErinHills #Golf pic.twitter.com/qZjIjk4GwN