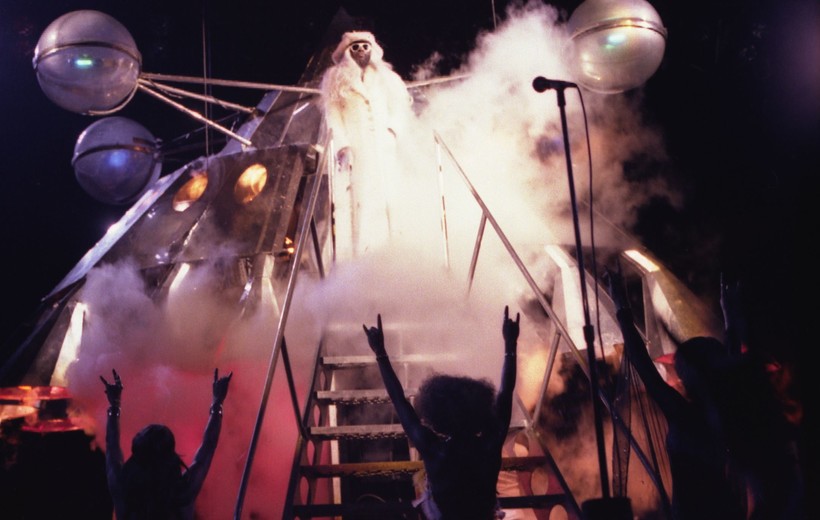 Pick Of The Day: Parliament-Funkadelic's Mothership Lands In Smithsonian

The Mothership, the signature stage prop of funk pioneers Parliament-Funkadelic's legendary performances, has been rescued from storage and will go on display at the Smithsonian Institution's National Museum of African American History and Culture in Washington, D.C.

A NPR article on Wednesday announced the prop's inclusion along with the other historic items identified as worthy of preservation as examples of American culture. USA Today reported that it will go on display in 2016.

The Mothership was the central artifact in P-Funk's cartoony, acid-damaged futuristic mythology and its arrival during the band's shows was always a clear highlight. Spewing sparks, billowing smoke and pulsating strobe lights, the silver-colored craft soared above the stage and then "landed," to mass cheers.

While the prop might appear tame in comparison to any contemporary metal band's standard pyro setup, the Mothership proved pivotal for more than just its value as onstage spectacle. It was a tangible embodiment of band leader George Clinton and his acolytes' concept for making their insurgent music palatable to a broad audience. The group sought to validate their breaking of racial, cultural and musical barriers by couching their songs and stage presentation in a strange, humorous vision of science fiction and a gallery of alternate personas. The oddball members of P-Funk and their strange, wild music were in this sense removed from the earthly concerns (and restrictions) of the day.

In the NPR article, P-Funk roadie Bernie Walden said he helped to find the mid-1990s replica of the Mothership (the original, '70s-era prop was apparently destroyed in the '80s) tucked away in Clinton's Florida studio. Walden helped museum folks reassemble the prop so it could go on display.

In the excellent concert clip below, recorded in Houston in 1976, music fans can witness how P-Funk would masterfully play up the Mothership's arrival on stage. (The entire concert is currently available elsewhere on YouTube.) Their hit, "Mothership Connection," would slowly morph into the old spiritual "Swing Down Sweet Chariot," with the long-wig-wearing Clinton beseeching the crowd to get involved and singalong. As the groove continued to pulse, late guitarist Glenn Goins stepped forward for a glorious, church-ified rave up. Goins beautifully pleads and pulls the audience in as the groove hypnotizes and keyboardist Bernie Worrell offers an array of otherworldly sonic squiggles. The music builds and builds until it finally climaxes into a pageant of campy pandemonium.

As the Mothership soars and descends, it's a sight to behold.