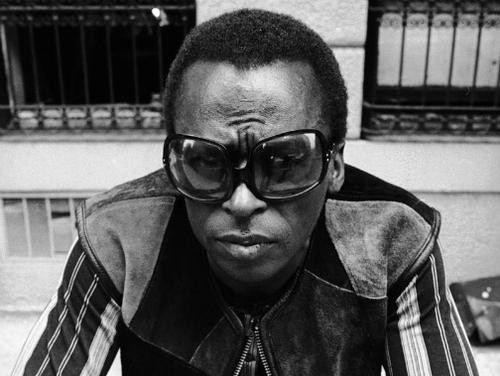 Pick Of The Day: Miles Davis' 'Ife' Is Beautifully Disheveled

There's something wonderfully disheveled, maybe even chaotic about this Miles Davis performance from the early '70s.

Watching the clip, recorded in Vienna in 1973, Davis looks fried. Wearing wraparound sunglasses and a white scarf, he was in the midst of his "electric period," dabbling with rock and funk explorations. Critics labeled the music as fusion, but Davis certainly wanted to look the part of a rock star.

According to published accounts, Davis was also battling substance abuse during these years and seeing the performance and Davis' demeanor, one might think he'd imbibed too much on this night. A viewer might easily think he might be using the bell of his trumpet to snort a line or two when it's out of frame.

Only guitarist Pete Cosey, who sadly died last year, keeps these experiments from being a total muddle. His attack is brilliant and the sounds are refreshingly bizarre in a jazz context. Cosey's tone is scratchy and thin-sounding, as if he strung his 12-string Vox Phantom with chicken wire. "Kind Of Blue" this is not.

It was perhaps not surprising that this lineup of musicians wouldn't endure beyond a couple of years. By the mid- to late '70s, Davis had retreated to deal with his demons.