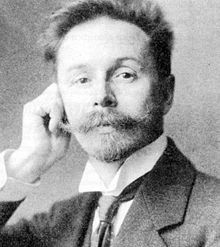 As the winter of 1893-94 set in, the young Russian pianist and composer Alexander Scriabin was miserable. A year earlier, he was to have undertaken a concert tour, but recurrent pain in his right hand had forced him to cancel. Doctors had prescribed a quiet sojourn in a hot southern climate, a slightly intoxicating drink of fermented camel’s milk, and swimming in the Black Sea.

From his sanatorium on the Volga, Scriabin had written to the object of his affections, sixteen-year-old Natalya Sekerina. His letters included a somewhat envious reference to a violinist suffering from hand pain who had gone to Paris for the latest treatments–hypnotism, electric therapy, and massage.

Despite the respite in the south, by the end of 1893, Scriabin’s hand was worse than ever. The pain had spread from his fingers up his arm.

When Natalya and her sister met Scriabin for a symphony concert, she found him changed beyond recognition and distracted by his ailment.

When Natalya’s piano teacher died, Scriabin asked to take over the lessons, but, not surprisingly, the girl’s mother chose someone else.

Maintaining a relationship through music became difficult. Natalya and her sister met Scriabin for a concert, and when a young physics professor joined them in the foyer of the hall, Scriabin “ran around and rubbed his hands together” in an effort to stop any conversation between Natalya and the newcomer. Well ahead of time, he escorted the girls back to their seats.

When Scriabin and the sisters attended the Moscow debut of pianist Józef Hofmann, Natalya was quite impressed, much to Scriabin’s displeasure. He refused to let the sisters meet the virtuoso, but Hofmann was an excellent skater, and when Scriabin and the sisters encountered him at a local rink, a mutual friend introduced Natalya to Hofmann, and she and the great pianist sailed around the ice in cheerful conversation while Scriabin winced every time Hofmann paid her a compliment.