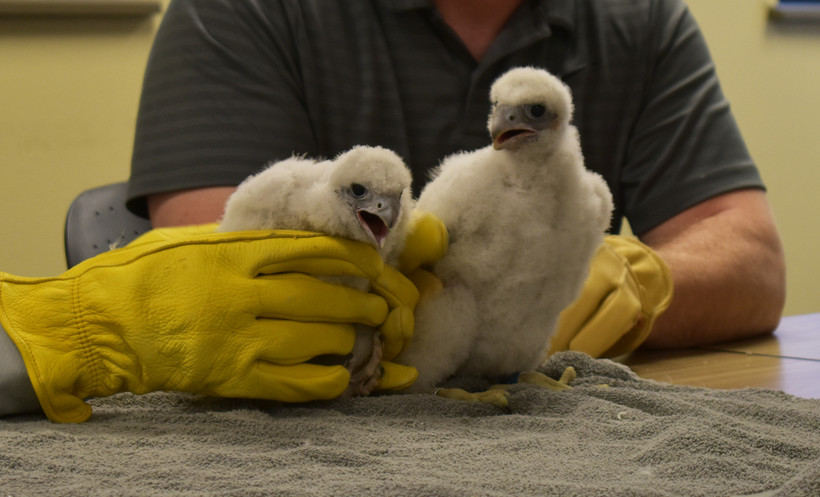 Researchers hold peregrine falcon chicks Dream, left, and Scrunchie after applying leg-bands to them. The two chicks hatched at the nesting site at the Weston Power Plant in late May. Rob Mentzer/WPR

Two new chicks hatched at the Weston Power Plant are the latest successes of the 30-year-old program
By Rob Mentzer
Share:

When Greg Septon started working with peregrine falcons, there were none in Wisconsin. The widespread use of the pesticide DDT had wiped out the population.

"Peregrines were gone east of the Mississippi River," Septon said.

Thirty years ago, Septon began work with We Energies and Wisconsin Public Service, creating nesting boxes high atop Wisconsin power plants and placing young birds that had been born in captivity into them, to see if they could make a go of it. It worked, and over time the program has expanded to four power plants and numerous other sites across the state, including bridges and skyscrapers.

On Monday, Septon applied leg-bands to the two latest successes of the project. The peregrine chicks Dream and Scrunchie hatched about three weeks ago in the nest at the top of the Weston Power Plant. They're still covered in gray down, but they're old enough to be vocally angry about having been taken from the nest. For the five minutes or so it took Septon to apply their bands, they made a ruckus. The bands will help researchers track their movements and measure the success of the nesting program.

In coming weeks, Dream and Scrunchie will leave the nest and set out on their own. With any luck, they'll find their own perch on a high cliff somewhere. The once-endangered species today has a fairly stable population in Wisconsin of about 40 nesting pairs.

Despite the growth of the peregrine falcon population, Septon said the raptors still need more than a little help from human-maintained sites like the one at the Weston Power Plant.

"Until we've got in this state at least a couple of dozen birds nesting successfully on cliffs again like they did historically, the lion's share of birds in Wisconsin are still coming from urban sites," Septon said.

Before the pandemic, the annual banding of the falcon chicks was a community event with an audience of WPS employees. In the past, the utility has brought in school groups as well. More recently, pandemic precautions have limited in-person viewings, but this year, WPS held an online vote for the chicks' names, on the theme "1992." 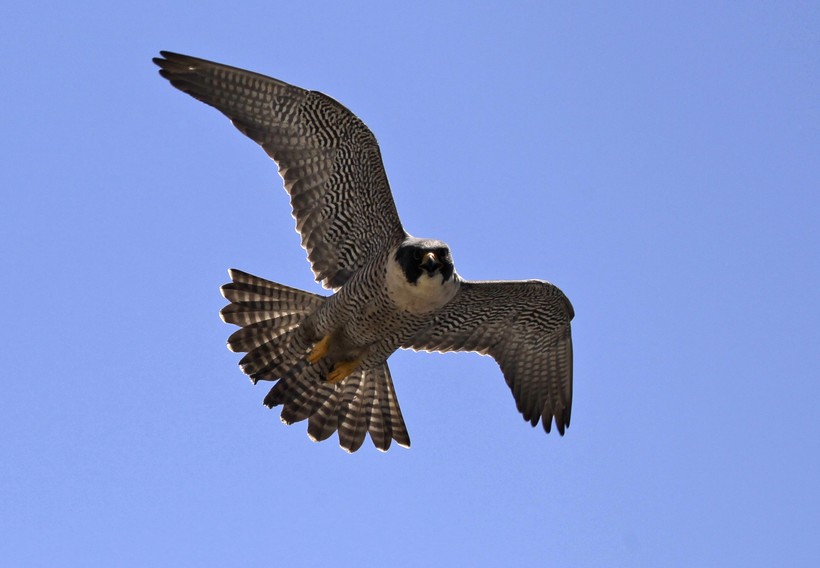 The peregrine falcon is the fastest animal on earth. Its preferred hunting mode is to circle high above prey like blue jays and pigeons, then dive-bomb them at speeds up to 200 mph. The smaller birds probably never know what hit them.

To stay safe from their natural predators such as eagles or great horned owls, the raptors prefer to build their nests extremely high up.

Mike Grisar is environmental team leader for the utility company. He said the company's falcon webcams draw an audience every year, allowing viewers on the internet to drop in on the progress of nesting sites at four Wisconsin power plants. They plan to continue the program for as long as the raptors require.

"If it were not for these manmade structures, there would not be a sustainable population" of peregrine falcons, Grisar said. "I see us being involved for as long as that's needed." 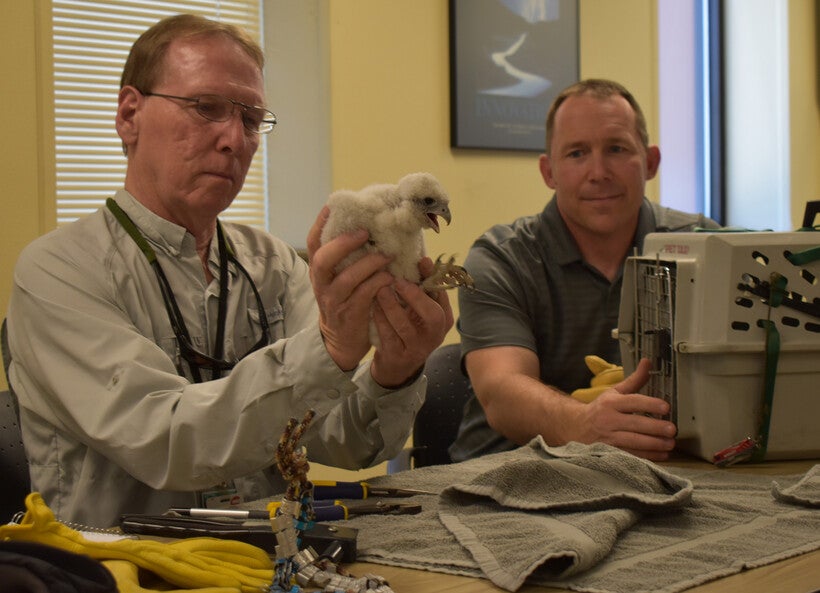 Septon said the banding has allowed scientists to learn more about just how far peregrine falcons migrate. One bird from Wisconsin was found wintering in Venezuela. And he said more and more nesting pairs are finding spots in Wisconsin’s natural landscape. There are pairs on the Wisconsin River and at Devil's Lake, on Washington Island in Door County and more.

"Peregrines have adapted to nesting on human structures like the power plant here," Septon said. "But they're also coming back to their historical sites on the Mississippi River cliffs." 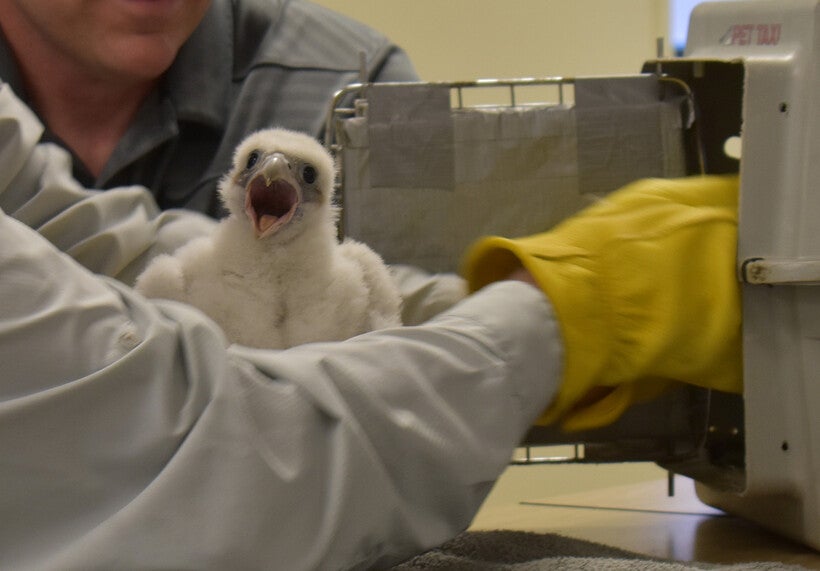 A peregrine falcon chick protests as it is getting a leg band applied, June 20, 2022. The chick was hatched about three weeks ago in the human-made nest atop the Weston Power Plant. Rob Mentzer/WPR