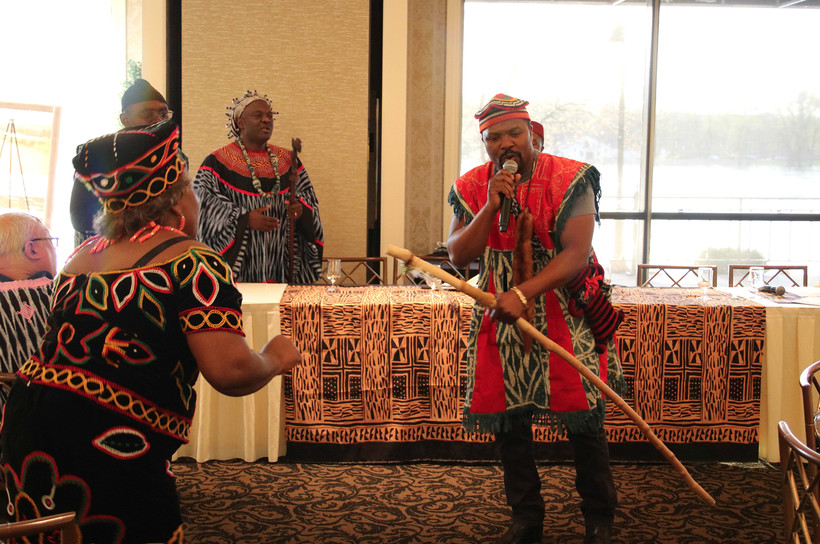 Traditional Cameroon singing and dancing at a town hall meeting in La Crosse last week to draw attention to the troubles in Cameroon. Photo courtesy of the Franciscan Sisters of Perpetual Adoration

For People In La Crosse, Conflict In Cameroon Is Personal

People in La Crosse are drawing attention to political unrest and violence in the west central African nation of Cameroon.

A recent town hall meeting was held in La Crosse to educate people about the situation in Cameroon and reinforce the relationships that have formed between the country and La Crosse.

In 2013, the city of La Crosse established a sister city with Kumbo, Cameroon.

"As we have grown and our relationship has grown, we have a strong interest in supporting these friends that we made through the sister city relationship," said Lee Rasch, a La Crosse Friends of Cameroon member.

The Franciscan Sisters of Perpetual Adoration based in La Crosse have worked with a Franciscan sisters’ community in Cameroon for more than 20 years.

"They’ve broadened us in many ways as we’ve gone over there to work in areas of health care, education and spirituality. They’ve come and stayed with us and gone to school and have worked with us in spirituality and cultural development," she said.

Dozens of people in both La Crosse and Kumbo have been involved in exchange visits, and students from Cameroon have attended universities in La Crosse.

But much of that goodwill and cultural exchange came to a halt in 2016 when political unrest and violence erupted in Cameroon in 2016.

The conflict stems from unrest between the French-led government in Cameroon and English-speaking provinces who allege they’ve been marginalized.

Rasch said the circumstances have turned violent with deaths of both citizens and those in the military. Homes have been burned, and about 10,000 residents of Kumbo have been displaced. Public schools have been shuttered for two years. Famine is also a possible threat as food production has dropped substantially.

"It’s a crisis because of the threats and the deaths that have occurred and the burning of homes and villages, but it’s also this impact on the culture and the infrastructure that is very concerning as well," he said.

McKenzie said the FSPA and La Crosse Friends of Cameroon are hoping people will sign an online petition encouraging the United States government to put political pressure on Cameroon.

"We’ve been working for a couple of years with (U.S. Rep.) Ron Kind’s office to try and get a resolution passed just to call our government to intervene, particularly to de-escalate the violence in the ways that it can and to facilitate some dialog for a lasting peace," she said.

"All of our friends in Cameroon say 'You know, if the United States says it, the world will do it,'" McKenzie said.

Rasch said he hopes the U.S. will continue financial pressure on Cameroon, but said people-to-people relationships can often accomplish more than governments can.

"Little La Crosse, Wisconsin, our role is to try to keep that process going. We don’t want this to feel like it’s a one-and-done effort. That governments have taken a position and it didn’t produce the results they needed, and they let it fade away," he said.

"We’re going to continue to spread that word so we can get as many voices asking governmental leaders, 'Don’t let up now. Keep the pressure on and bring the parties to the table.' The longer we wait, the more challenging this whole situation will be," said Rasch.

The La Crosse effort isn’t taking sides in the Cameroon conflict, rather it is encouraging the sides to come to the table to find a peaceful resolution.