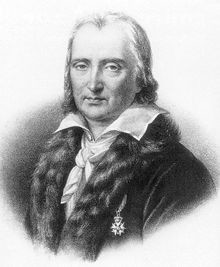 Young André Gretry led the life of a character from Dickens.  He was the son of a poor church musician in the city of Liège, Belgium.  About 1750, at the age of nine, he became a choir boy, a position that required him to walk a mile each way to attend six services a day.  One morning, when he arrived late for the five o’clock service, he was forced to remain on his knees for two hours. In order to avoid further punishment, young Gretry made a routine of leaving for church at three in the morning, summer and winter, and sitting outside the church door, his lantern in his lap, catnapping until someone came to open the door and let him in.

He applied his energy, self-discipline, and imagination to music.  He learned the basics of composition and became a respected church singer who was also a popular performer in local salons.

At the age of seventeen, when his voice broke, Gretry became a composer of symphonies and won a scholarship to study in Rome, where he developed an interest in writing operas–a pursuit that brought him considerable success in Paris in the quarter century to follow.  But by the close of the 1780s, Gretry would have to begin another career change. The French Revolution, which led to a government insistence on politically correct operas, inspired only mediocre efforts from Gretry, and the growing taste for massive musical displays was at odds with his relatively simple orchestrations.

So by the turn of the nineteenth century Gretry diverted most of his energy from music to literature, writing his philosophicalMemoirs or Essays on Music and devoting the last years of his long life to his eight-volume Reflections of a Recluse.

He had come a long way from the cold steps of his boyhood church because his ability to adapt had enabled André Gretry to rise to the top of the European musical establishment.