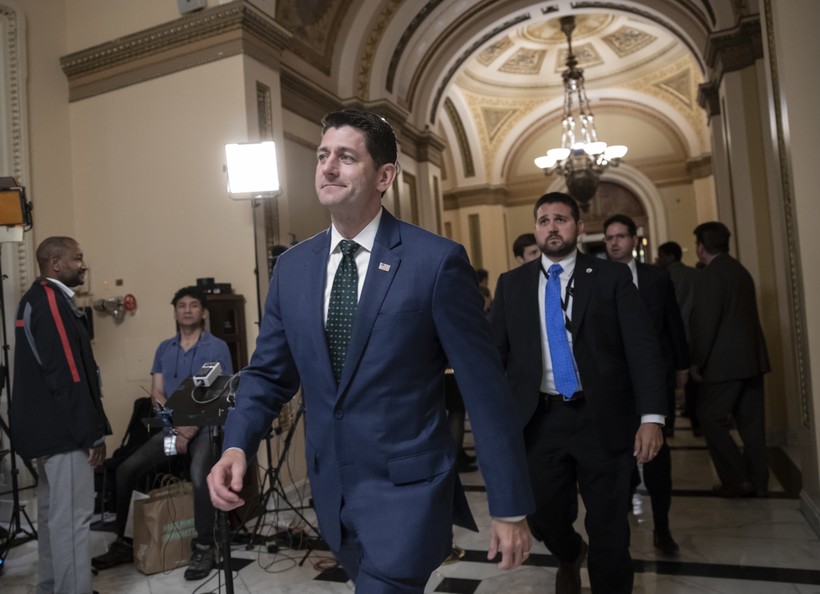 Speaker of the House Paul Ryan, R-Wis., emerges from the chamber just after key conservatives in the House Freedom Caucus helped to kill passage of the farm bill which had been a priority for GOP leaders, at the Capitol in Washington on May 18, 2018. The bill was later passed by the House just over a month later, on June 21. AP Photo/J. Scott Applewhite

Reducing Poverty Was A Focus Of His Congressional Career, Although His Approach Has Been Questioned
By Miranda Suarez
Share:

Former Speaker of the House Paul Ryan has launched a new anti-poverty foundation in his hometown of Janesville.

Ryan, who spent two decades in Congress, made poverty a focus of his political career. He kick-started the American Idea Foundation earlier this year with $7 million from his congressional account, according to the Associated Press.

In a video featuring panoramic shots of the Statue of Liberty and footage of former President Ronald Reagan, Ryan outlined the goals of the organization.

"The American Idea Foundation will focus its efforts on promoting free-market principles that advance economic growth, that expand upward mobility, that reduce poverty, so we can make a lasting difference," he said in the video.

In the House of Representatives, Ryan proposed work requirements for people who receive government benefits. He also called for letting states scrap benefit programs and fund anti-poverty organizations instead. The underlying idea was that the federal government spends trillions of dollars on failed programs that don't lift people out of poverty, but that conclusion has been called into question.

University of Wisconsin-Madison professor and report author Tim Smeeding said he likes parts of Ryan’s philosophy, but the government needs to play a role in helping low-income people.

Smeeding, who said he met with Ryan and discussed the new initiative, called Ryan’s approach to poverty fighting "compassionate conservative."

"If he were a Democrat and had devoted as much of his career and intellectual energy to thinking about anti-poverty policy, he would be a pretty noteworthy Democrat," Weidinger said.

Weidinger, who worked with Ryan for years on the House Ways and Means Committee, said Ryan’s lasting legacy on welfare policy is his push for "evidence-based policy."

Ryan and Sen. Patty Murray, a Washington Democrat, wrote the Evidence-Based Policymaking Act, a law that requires agencies to collect data about the effectiveness of their programs and present them to the government budget office.

Ryan will continue to promote evidence-based policymaking with the American Idea Foundation, spokesperson Kevin Seifert wrote in an email.

"The Foundation’s focus is to identify policy solutions that are working in communities across the country, strengthen their credibility by developing quantifiable metrics and evidence, and then educate lawmakers in the hopes of expanding these proven solutions to more areas of the country," Seifert wrote.