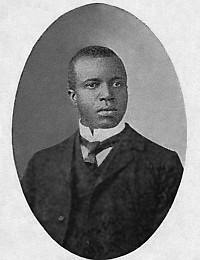 With the help of publisher John Stark, Scott Joplin made his name with a succession of genteel, lilting ragtime piano pieces, beginning with the million-seller Maple Leaf Rag in 1899.

By 1911 he felt that he was in a position to create an entirely new kind of music, an American opera dealing with an American subject–free from outside influences.

He sent his first opera, A Guest of Honor, to the copyright office. It disappeared in the mail, never to be seen again.

He pinned all of his hopes on his second effort, Treemonisha, which was set on a plantation and told of a young woman who wanted to free her people from poverty, ignorance, and superstition.

Joplin had been looking for a backer for two years by the time the manager of New York’s newly-integrated Lafayette Theatre agreed to put on the opera. Joplin sent out an urgent call for performers, hoping to put on Treemonisha by the fall of 1913. But while he worked frantically to line up a cast, the theater changed management and switched to musical comedy.

In the meantime, black music was passing Joplin by. Ragtime songs, many of which he considered vulgar, superseded instrumentals. And at the piano, the genteel lilt gave way to speed.

By 1915, when Treemonisha finally was staged at the Lincoln Theatre in Harlem, it was a shadow of what Joplin had envisioned. Instead of hiring a forty-piece orchestra, Joplin played the accompaniment on the piano. Props and costumes were few.

A friend of Joplin’s described the resulting performance as “thin and unconvincing,” and pointed out that its Harlem audience had no interest in re-establishing connections with a plantation past that too many of them had worked hard to forget.

Treemonisha was performed in full for the first time in 1972, more than half a century after Joplin’s death. Four years later, he was awarded a posthumous Pulitzer Prize for his contribution to American music.