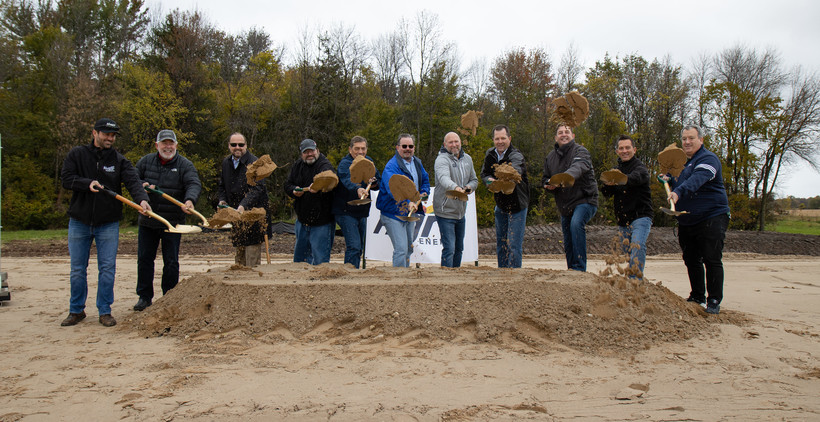 Officials participate in a groundbreaking ceremony for Wisconsin's first commercial facility to convert dairy farm waste into renewable energy for vehicles. Courtesy of the University of Wisconsin-Oshkosh

That’s thanks to a partnership between the University of Wisconsin-Oshkosh and the California-based Agra Energy.

The $20 million facility is located at the Dairyland Farm in New Franken. It will use new technology to convert manure into an estimated 750,000 gallons of renewable diesel and jet fuel each year. The company hopes to have the biofuel facility up and running by January.

Agra Energy President and Chief Technology Officer Tony Long said the biofuel produced by the new facility will be cleaner than typical diesel or jet fuel.

Agra Energy’s focus on renewable energy is aimed at finding alternatives to power vehicles that are “pretty tough to electrify” such as heavy transit and aircraft, Long said.

"We've put a lot of our focus on those fuels because we feel like those are fuels that are needed to keep the quality of life that humanity has come to know," he said.

Wisconsin is the ideal place for a facility to turn dairy manure into energy because it has an abundance of dairy farms, according to UW-Oshkosh Biogas Systems and Research Development Director Brian Langolf.

The process of converting manure to fuel begins with putting the waste through an anaerobic digester. The biodigester treats the manure, removes pathogens, reduces odor and transforms the nutrients in the manure, he said.

One of the byproducts of that process is high-energy biogas. Agra Energy’s system puts that biogas through a new micro gas-to-liquid conversion system, which converts the gas to liquid fuel, Langolf said.

"You could do this same technology with food waste, and, quite frankly, human waste," Langolf said. "Agra might put plants at other facilities down the road, but they're targeting dairy farms right now because we have a lot of dairy in our state and in the Midwest."

"This gives us energy independence and sources of renewable energy that work with our existing infrastructure," Long said.

Additional research is still needed before the company begins working on biofuel gasoline, he said.

The new commercial facility for diesel and jet fuel builds on the relationship the company and university have been developing since 2017.

UW-Oshkosh has had a biogas program since 2010 and developed a biodigester certification training, Langolf said.

In 2017, Agra Energy attended one of the university’s certification training sessions, Langolf said. Two years later, the company and college partnered to create a small facility at the Allen Farm in northwest Winnebago County.

"We were making fuel by 2020 at that site, and doing research and development that ultimately propelled them to their first commercial site," he said.

Throughout the process, Agra Energy helped fund biogas research at UW-Oshkosh and began working with students as it developed its system, Long said.

Three of those students have already been hired for the New Franken site and the company hopes to hire a fourth upon graduation.

"We hope to continue to have a stream of graduates from UWO that come to work for us at various sites," Long said. "It was the perfect university for us. You have many students coming from rural areas, and we’re looking to do our work in rural areas."

UW-Oshkosh Chancellor Andrew Leavitt said the partnership is in line with the university's larger sustainability goals, which includes becoming carbon-neutral by 2030.

"This fits right in with the ethos of the institution and certainly our mission, in that we want to be at the cutting edge of helping produce technologies, which will move us away from the traditional fossil fuels," Leavitt said.