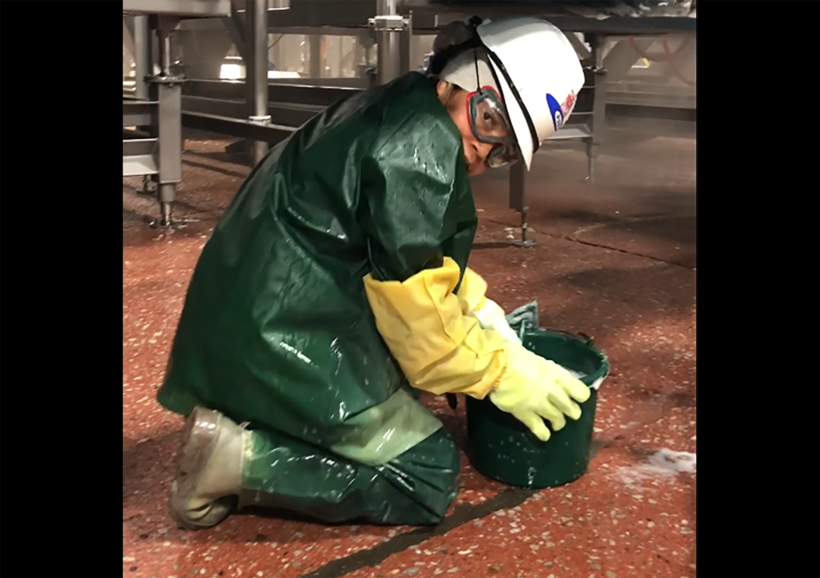 A Nebraska judge has ordered a Wisconsin-based company to comply with a federal investigation into allegations that it used child labor.

According to the Nov. 9 civil complaint, PSSI hired 31 minors between 13 and 17 years old to clean meat packing plants in Minnesota and Nebraska. The lawsuit said several of those minors, including a 13-year-old, suffered chemical burns and other injuries.

The Department of Labor said minors were working overnight shifts in hazardous occupations. PSSI also allegedly interfered with an investigation by intimidating minors and deleting or manipulating employment files.

"Federal laws were established decades ago to prevent employers from profiting by putting children in harm’s way," said Michael Lazzeri, wage and hour regional administrator for the Department of Labor based in Chicago. "Taking advantage of children, exposing them to workplace dangers — and interfering with a federal investigation — demonstrates Packers Sanitation Services Inc.’s flagrant disregard for the law and for the well-being of young workers."

The Nov. 10 court order requires the company to stop using alleged child labor and to comply with investigators. A hearing on the case is scheduled for Dec. 7.

In a statement, a spokesperson for PSSI denied that the company employed minors and said it has cooperated with the investigation.

"While rogue individuals could of course seek to engage in fraud or identity theft, we are confident in our company's strict compliance policies and will defend ourselves vigorously against these claims," the statement read. "... PSSI will continue to cooperate with the (Department of Labor) and will continue to enforce its absolute prohibition against employing anyone under the age of 18."

Even so, critics say the company has a history of unsafe working conditions. The lawsuit also comes amid a national labor shortage and after the state Legislature approved a bill that would have expanded working hours for teens. The bill was vetoed by Gov. Tony Evers back in February 2022.

PSSI has a history of violating safety regulations, dating back years, according to one former top official for the Occupational Safety and Health Administration, or OSHA.

"This is a company that has a long history of poor working conditions, a long history of killing and injuring its workers (and) a long history of OSHA investigations and OSHA citations," said Jordan Barab, who served eight years as deputy assistant secretary for OSHA under former President Barack Obama. "There are various factors that go into that. First and foremost, you have a situation where this is a highly indebted, limited equity company that is trying to basically serve its shareholders more than its workers."

A 2022 report by the Private Equity Stakeholder Project watchdog group examined PSSI’s OSHA records. Since 2018, the company has been investigated for four employee amputations and three deaths, including one decapitation, the report said.

According to Barab, the decapitation "cut the head off a worker who was trying to clean a machine that was turned on while his head was inside it."

One incident detailed in the report happened in Milwaukee in July 2019. An employee was cleaning a corkscrew mixing conveyor and attempted to remove a blockage with his right hand, amputating his index fingertip, the report said.

Last July, OSHA also cited the company, along with three others, in connection with a nitrogen leak that killed six workers and injured nearly a dozen at a Georgia poultry processing plant, according to the report.

"PSSI stood out as a particularly dangerous workplace with one of the highest numbers of serious injury reports compared to its relatively small number of employees," the report said.

In a statement, a company spokesperson said safety is PSSI’s "highest priority" and that the cases in the report were misrepresented. The company says one case was determined to be a non-work-related death, while no OSHA citation was issued for another and two more involved employees who did not follow company protocols.

Regarding the chemical leak in Georgia, PSSI said its employees were not onsite and were not involved in the production process or equipment maintenance. The spokesperson said the manufacturer was determined to be at fault, not PSSI.

"The so-called 'report' — which is riddled with errors and misinformation — is from a fringe, biased shell group," the statement said. "Even one tragic accident is one too many, but they misleadingly presented certain incidents to paint a false picture about PSSI."

However, Barab said PSSI’s track record shows that its violations "are not isolated freak incidents."

"This is a pattern and a pattern that's well known, certainly to the company itself," he said.

Labor shortage and protections for minors

Laura Dresser, associate director of the COWS economic think tank at the University of Wisconsin-Madison, said the labor shortage may make some companies more likely to violate protections for minors.

"It is probably the case that tight labor markets mean that there may be more sorts of violations like this because firms are desperate to fill jobs and may cut corners in order to do so," she said.

Child labor laws help to ensure that minors are able to gain an education and receive a high school diploma, Dresser said.

In 2021 and 2022, a Republican-backed proposal circulated the state Capitol that would have enabled 14- and 15-year-olds in Wisconsin to work longer hours.

Wisconsin has the same hour restrictions for 14- and 15-year-olds as the federal government, which allows them to work between 7 a.m. and 7 p.m. for most of the year and extends until 9 p.m. from June 1 through Labor Day.

Under the proposal that was vetoed, 14- and 15-year-olds could begin work at 6 a.m. and work as late as 11 p.m. on non-school days and 9:30 p.m. on school days. The proposal had received support from industry groups amid a tight labor market.

Dresser said it was an example of employers trying to deregulate to make more child labor possible.

"In a 40-year framework, power has been moving quite strongly away from workers — partly because of deregulation, the fact that our minimum wage in the state is $7.25 an hour and the incapacity of the state to enforce labor standards," she said. "To me, it's part of the fabric of that to see a trade group asking for changing child labor laws. It's just the continued work of employers to push down labor standards."

Editor's note: This story was updated to reflect that the hearing had been moved. After this story went to press, PSSI filed a motion in court Wednesday night. In response, the court moved the hearing.