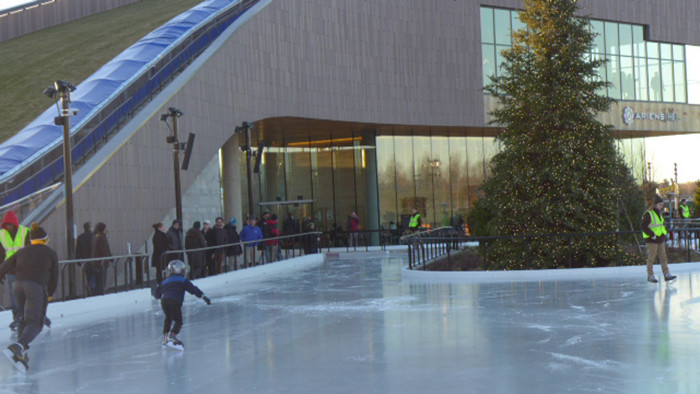 The Green Bay Packers are joining other National Football League teams that are developing areas that neighbor their stadiums as a way to attract fans year-round.

The Titletown District is under development and parts of it opened this summer, including a hotel and sports medicine clinic.

On Thursday, the Green Bay Packers team President Mark Murphy cut the ribbon on a new ice skating rink, restaurant, and a tubing hill. He said it will be a $165 million dollar project, with at least $65 million chipped in by the Packers.

"We’re a community-owned team and for us giving back to the community is important ... The other aspect of this is to ensure the Packers stay in Green Bay and to remain competitive here, having a strong economic base here is crucial to that," Murphy said.

Skaters and tubers will have to pay to use the facilities, but there are free public areas located across the street from Lambeau Field.

The project isn’t all about football and fun. It will include an economic development partnership with Microsoft. Murphy said it is a three-part project.

"The first part will be an accelerator and our incubator for emerging or new businesses. We’ll also have a venture capital fund, and both Microsoft and the Packers have pledged to put $5 million into 'Titletown Tech,'" Murphy said.

He said the third part of the project is an innovation lab where regional companies can get technological help from Microsoft.

The Packers purchased land once occupied by a hotel, a K-Mart, and other businesses to build the Titletown District.

Murphy said the opening of the ice rink and tubing hill is a capstone of the project’s first phase, more development is in the works.