Between robots Crow, left, and Tom Servo, Joel Hodgson announces his 2022 return to the character of Joel Robinson in episode "Demon Squad" on Mystery Science Theater 3000. Hodgson created MST3K in 1988 and hosted the show until 1993. Photo courtesy of Alternaversal / Shout! Studios via YouTube

With the support of a fandom nearly 35 years in the making, the quirky comedy show "Mystery Science Theater 3000" launched a new season this year of lampooned movies on its own streaming service.

The Gizmoplex, as the platform is called, may help ensure the future of the show — in which a janitor, trapped on a satellite orbiting Earth, is forced to watch "bad" movies with his wisecracking robot friends.

Joel Hodgson, a Wisconsin native and creator of MST3K, recently appeared on Wisconsin Public Radio’s "The Morning Show" to discuss how the show has endured — and how local Wisconsin television programming inspired him to pair "puppets and cheesy movies."

Growing up in Fort Atkinson in the 1960s, Hodgson said he remembers watching — both on TV and live in-studio — Cowboy Eddie and his ventriloquist, Howie Olson, on the WISC-TV show "Circus 3." He also has fond memories of Albert the Alley Cat, a sock puppet who delivered weather reports from TV6 in Milwaukee.

"It had a huge effect on me," Hodgson said. "And I'm kind of doing the same thing. That’s where it kind of started for me."

Hodgson was fairly successful as a standup comic when he started MST3K on a small TV station in Minneapolis in 1988. The show bounced around cable networks and was distributed on VHS tapes and DVDs before going into syndication.

In recent years, the show twice received funding to produce more episodes by raising more than $6 million through crowdsourcing campaigns on Kickstarter. Hodgson said he wasn’t entirely surprised by the success of these campaigns.

"I think it's built into the history of the show. When we started, cable was really in its infancy, and you couldn't really get it (broadcast) everywhere," he said. "So we encouraged people to make videotapes of the show and send them to their friends. And they did. It's similar to the Grateful Dead, where they let people record their concerts and distribute them. We had a similar relationship with our audience. So when we needed them, they were there for us."

The first fundraising effort earned MST3K two seasons on Netflix in 2017-18 before the streaming service canceled it. The second Kickstarter campaign paid for creation of the Gizmoplex, which makes available a 13th season of MST3K and the more than 200 previous episodes. Monthly live events with the cast and crew are also offered.

Hodgson said the writing process for the show is elaborate. He said eight to 10 writers initially contribute as many as 7,000 snarky comments for the host and robots to spout during any given movie. The riffs are then culled to about 700.

"Demon Squad," a 2019 sci-fi flick included in the latest season, features Hodgson reprising his role as Joel Robinson, the janitor trapped in space. Hodgson said the filmmakers of "Demon Squad" didn’t mind seeing their movie being the target of jest. In fact, they were fans of MST3K and took part in its premiere.

"They were really gracious and very nice to have on this show. And we need that," Hodgson said. "We need people who are making movies that are okay with us riffing on them. That's the secret of our success. They're our dancing partners." 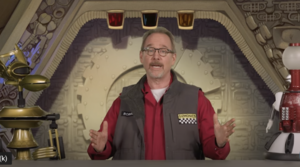 Joel Hodgson grew up in Fort Atkinson and Ashwaubenon in the 1970s watching local TV. And much of what he saw inspired his creation of Mystery Science Theater 3000, a cult favorite TV show in which a man stranded in space with robot friends hilariously riff bad movies.