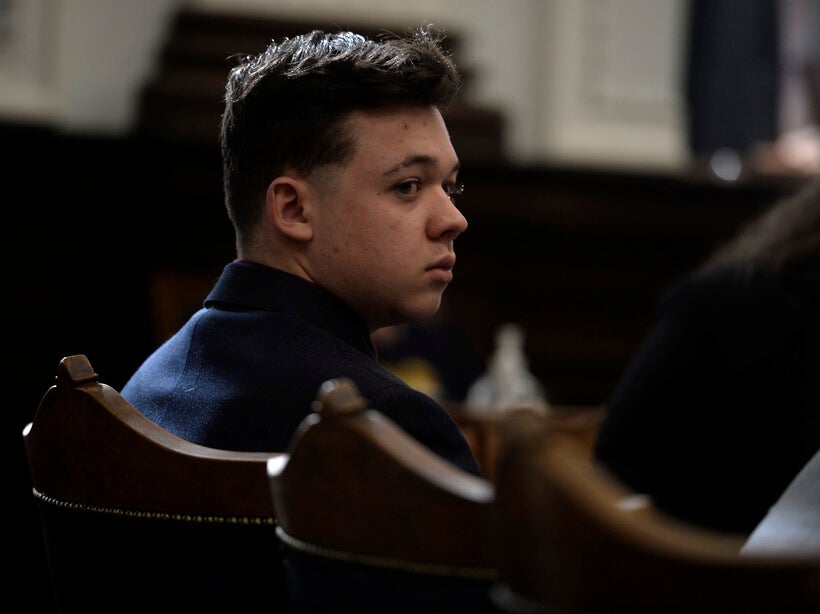 Kyle Rittenhouse listens as his lawyer gives opening statements to the jury at the Kenosha County Courthouse in Kenosha, Wis, on Tuesday, Nov. 2, 2021. Rittenhouse is accused of killing two people and wounding a third during a protest over police brutality in Kenosha, last year. Sean Krajacic/The Kenosha News via AP Photos

Both prosecutors and defense paint picture of chaotic night ending in tragedy
By Corrinne Hess
Share:

Prosecutors and defense attorneys both used opening arguments Tuesday to paint a picture of a chaotic night that ended in deadly tragedy when Kyle Rittenhouse shot and killed two people and injured a third in Kenosha.

Rittenhouse, 18, is charged with homicide in the shootings, which occurred during unrest and protests over police violence in Kenosha last summer. The closely watched trial began this week.

In his 33-minute opening statement, Kenosha County Assistant District Attorney Thomas Binger said Kenosha residents were rightly upset over the shooting last August of Jacob Blake, a Black man, by a white police officer that left Blake paralyzed from the waist down. That led demonstrators to take to the streets in protest, with some setting fires and damaging buildings. But then, Binger said, outsiders came to town.

"Like moths to a flame, tourists from outside of our community, were drawn to the chaos here in Kenosha," Binger said.

Among them was then-17-year-old Rittenhouse, Binger said, who set out to protect a local business but later ventured into the crowd armed with an AR-15-style rifle and, Binger argued evidence will show, ultimately instigated the confrontation that left Joseph Rosenbaum, 36, and Anthony Huber, 26, dead, and Gaige Grosskreutz injured.

"The same loud noises, the same gun fire, the same arson, the same tear gas, the same hostile confrontations with people who believe the opposite of them and yet out of these hundreds of people only one person killed anyone that night," Binger said.

Binger said evidence will include a video from a FBI helicopter showing Rittenhouse chasing Rosenbaum. He also said the shot that killed Rosenbaum was in the back.

Meanwhile, defense attorney Mark Richards sought to lay out the case that Rittenhouse was acting in self-defense when he shot the men.

Richards presented about 40 videos and photos in his opening arguments, including pictures of Rittenhouse being kicked and then hit in the head by Huber's skateboard. Richards says Rittenhouse has not denied the killings.

"If there was trouble that night Joseph Rosenbaum was there," Richards said. "And that’s ultimately who visited himself on Kyle Rittenhouse. And the other individuals who did not see that shooting attacked him in the street like an animal." 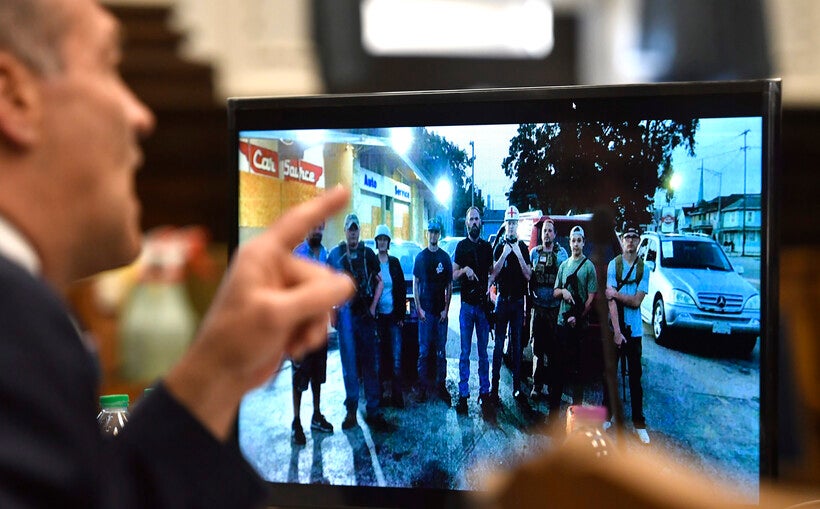 Mark Richards, lead attorney for Kyle Rittenhouse, shows a photograph with Kyle Rittenhouse, second from right, along with Dominic Black, right, from the evening of Aug. 25, 2020, as he cross-examines Black during Kyle Rittenhouse's trial at the Kenosha County Courthouse in Kenosha, Wis, on Tuesday, Nov. 2, 2021. Rittenhouse is accused of killing two people and wounding a third during a protest over police brutality in Kenosha, last year. Sean Krajacic/The Kenosha News via AP Photos

Craig Mastantuono teaches law at Marquette University. He said the pre-trial publicity and social media posts claiming Rittenhouse was engaging in self-defense will make this case more difficult for the state.

"I think the prosecution did a fairly decent job of putting some context to it by drawing a contrast between Mr. Rittenhouse and everyone else and saying repeatedly he was the only one who killed people," Mastantuono said.

Wisconsin defense attorney Dan Adams, who is not involved in the case, said there is no question Rittenhouse is morally at fault. But proving he is guilty of homicide and attempted homicide will be more difficult.

"The facts have to match what the statues in Wisconsin say is prohibited, and they have to disprove that self-defense was necessary in the case," Adams said.

A jury pool of 11 women and nine men were chosen in just one day in this high-profile case Monday. Of the 20 people selected there’s only one who appears to be a person of color. During jury selection, dozens of people asked to be excluded saying they were afraid to serve and didn’t want to have arguments with family or friends.

Judge Bruce Schroeder says he expects the trial to last about two weeks.