Skip to main content
The rise and fall of Winnebago County District Attorney Joe Paulus reveals the immense power of prosecutors – and how it can be abused
The Golden Boy
Listen
The Golden Boy
Home
/
Open and Shut
Wednesday, April 20, 2022, 6:00am
By
Phoebe Petrovic and Dee J. Hall | Wisconsin Watch
Share:

Remember the beginning of the COVID-19 pandemic? Way back in 2020, when everyone was stocking up on hand sanitizer and toilet paper? That spring, Jerry Lingnofski was working as the head salesman at a gun store. It had a buy-one-get-one-free special — rifles with an unwrapped roll of toilet paper on the barrel.

But Lingnofski wasn’t always in gun sales. He used to work in law enforcement in Wisconsin’s Fox Valley.

Lingnofski had an important story to tell — one that he had recited under oath in a secret court proceeding in 2005. But before he agreed to an interview, Lingnofski wanted a Wisconsin Watch reporter to do some "homework" — by getting a judge to dissolve a secrecy order of the transcript of his testimony.

It worked. And now Lingnofski, a retired detective for the Town of Menasha Police Department, was ready to talk about the case that had put him sideways with former Winnebago County District Attorney Joe Paulus.

It had to do with the horrific 1991 murder of a 2-year-old girl by her neighbor, Kelly Coon, a case prosecuted by Paulus and then-Deputy District Attorney Vince Biskupic. 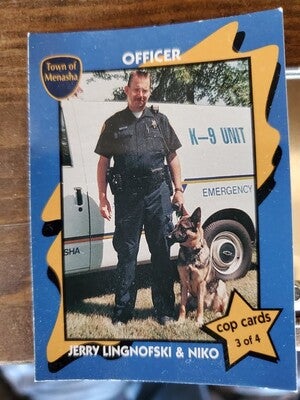 "Amy Breyer was a beautiful little girl, lived with her parents at the mobile home park … Kelly Coon was a subject that we dealt with on and off for different things," Lingnofski recalls. "And one night, he kidnapped that young child, sexually assaulted her and murdered her."

According to Lingnofski’s testimony, Paulus and a higher-ranking officer on the Menasha police force, Steve Malchow, had asked him to lie —in a weird way — about his search of the area where Amy’s body was found.

Lingnofski says the two men wanted him to say he found the child’s diaper while rolling around on the ground, instead of where he had actually found it, in some bushes that scratched up his arms.

The lie didn’t make any sense to Lingnofski, but he says Paulus and Malchow insisted. Malchow accused him of not being "team player," he says, implying that he should do what Paulus wanted — or be banned from taking the stand in Coon’s trial.

Lingnofski refused. And he never did testify in the Coon case.

But it left him with a lasting impression of Paulus as a prosecutor — a man who would later go to prison for his dishonesty.

Malchow is retired from the Outagamie County District Attorney’s Office, where he was an investigator for Biskupic. Malchow and Paulus did not respond to efforts to reach them through phone, email and certified letter with lists of questions.

Before his downfall in 2004, Paulus was known as a flashy, hard-charging district attorney with a knack for prosecuting headline-grabbing cases.

"For the longest time, Joe was called the Golden Boy," says Jerry Burke, a retired long-time TV reporter for WBAY. "He could do no wrong. …. Boy, look at the convictions he’s getting. Well, that was before we knew some of the crap he was pulling under the table."

Paulus became Winnebago County district attorney in 1988 when he was just 29 years old. The young DA hired an even younger assistant, Biskupic, who was fresh out of law school. 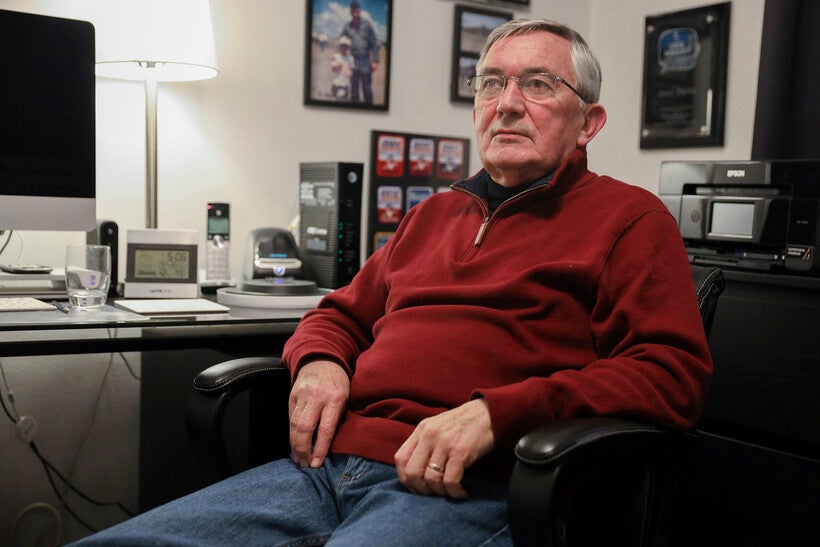 Jerry Burke is a retired broadcast reporter who used to work at WBAY in Green Bay, Wis. He regularly covered Winnebago County District Attorney Joe Paulus and Outagamie County District Attorney Vince Biskupic during his time as a reporter. Burke says he disliked Paulus but says of Biskupic: "Vince had ethics." Burke was photographed at his home in Oshkosh, Wis., in 2020. Dee J. Hall/Wisconsin Watch

"Joe was his (Biskupic’s) mentor," recalls Mike Balskus, a now-retired veteran Fox Valley prosecutor who investigated Paulus’ tenure and later worked for Biskupic in neighboring Outagamie County. "Vince would follow Joe around like a puppy dog. Essentially he would do whatever Joe wanted. And I think (he) also learned from Joe."

Burke, for his part, says a good prosecutor is characterized by ethics, and "Vince (Biskupic) had ethics."

In 1990, Paulus won one of Wisconsin’s first no-body homicide convictions. In 1992, he won the first conviction in the Fox Valley using DNA evidence.

Paulus also prosecuted a man for allegedly sexually assaulting a woman who had what is now called dissociative identity disorder. At the time, in 1990, the so-called Multiple Personality Rape Case got written up in newspapers including the Washington Post and The Baltimore Sun.

But the judge overturned the conviction just six weeks after trial, saying he erred in preventing a defense expert’s examination of the alleged victim. Paulus’ victim-witness coordinator also discovered the star witness was having sex with the woman, whom he knew had a mental illness — an action that bore a strong resemblance to the crime charged against the defendant.

'You made the right choice'

About a decade later, Paulus would make headlines again — just not the kind anyone would want. That story begins with a young assistant district attorney named E.J. Jelinski. 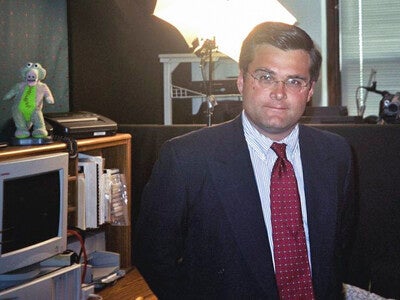 E.J. Jelinski was an assistant district attorney in Winnebago County who worked under Joe Paulus. After learning about Paulus’ misconduct in office, Jelinski reported him to the FBI. He was later fired by Paulus and is now in private practice in Menasha, Wis. Jelinski is pictured here in 2004, the same year Paulus pleaded guilty to federal charges of bribery. Photo courtesy of E.J. Jelinski

Jelinski is in private practice now in Menasha. He started working for Paulus in 2001, while he was still in law school.

He describes Paulus as funny — and sometimes, even kind. But, says Jelinski, "the majority of the time he spent playing with people just for his own amusement. And he was cruel. He was quite cruel."

He recalls Christmas Day 2001 when Paulus called him 16 times. "And finally, on the 16th time I answered," Kelinski said. "And he said, 'I just wanted to make sure you were thinking about me on this important holiday, ha ha ha,' click."

Jelinski says Paulus valued one quality above all others: loyalty.

Jelinski learned this early on, when Paulus decided to go after fellow prosecutor John Daniels.

Daniels said in an email that it had to do with police officers bringing cases directly to him because they didn’t trust Paulus. According to Jelinski, the district attorney ordered his staff to ignore Daniels. Jelinski went to talk to Daniels anyway. That’s when Paulus threatened to fire Jelinski unless he yelled "F— Daniels" loudly in the DA’s office in Oshkosh.

When the young assistant district attorney refused, he says Paulus got on the office loudspeaker to announce that "Mr. Jelinski has elected to be fired." After packing his things and heading to the parking lot, Jelinski had a change of heart. He returned to the office and yelled just what Paulus had told him to — and he got his job back.

Money — then a dismissal

Somewhere around the year 2000, Burke, the TV reporter, started hearing rumors about drunken driving cases that were being "hidden" in Winnebago County or "if you paid a certain amount of money, it went away."

Burke recalls learning of a man who had been arrested for drunken driving with a blood-alcohol level three or four times the legal limit — and that the case was mysteriously dismissed.

"And every time I saw one of this individual’s trucks around town, I would just go, 'Oh my God, there he is,'" Burke says. "He got away with it. He didn’t hurt anybody, thank God. But he was drunk, very drunk."

But E.J. Jelinski could.

Jelinski decided to challenge Paulus in the upcoming 2002 election. And he began to investigate the whispers that had been swirling around Winnebago County. He heard from one probation agent who had a "story about money and a dismissal."

Those words — "money and a dismissal" — sent Jelinski, his coworker, and their friend, a police officer, digging through Paulus’ case history.

A pattern emerged. A person got a lesser charge in a plea deal or sometimes the charges were dismissed entirely on a technicality. After the case was closed, the files disappeared. And the defendants were all represented by the same attorney — Mitch Schierland.

Jelinski, his coworker and his friend found 22 "hinky" cases and set about recreating the missing files by ordering transcripts of hearings from court reporters. Jelinski suspected that Schierland had funneled cash payments from his clients to Paulus in exchange for sweetheart deals. 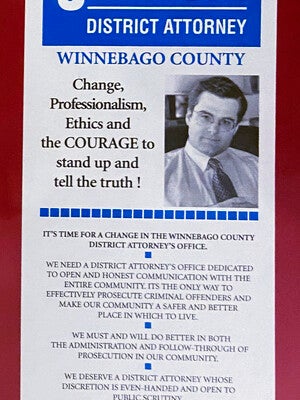 E.J. Jelinski challenged Winnebago County District attorney Joe Paulus in the 2002 election after learning of Paulus’ misconduct in office. During the campaign, Jelinski released tapes he and a co-worker had made secretly — but legally — of Paulus bragging about having sex in the district attorney’s office. Later that year, Paulus and Jelinski both lost in the Republican primary. This campaign flier is part of Jelinski’s personal scrapbook collection. Photo courtesy of E.J. Jelinski

It turns out, he was right, "which is bribery," Jelinski says. "Bribery and corruption."

Jelinski and his co-investigators reported their findings to the FBI in January 2002. Jelinski officially announced his candidacy in April 2002. Paulus fired him and his coworker ally in May.

In July, they released tapes they had secretly — but legally — made of Paulus bragging about having sex in the district attorney’s office. Weeks later, Paulus and Jelinski both lost in the Republican primary.

After 14 years as district attorney, Paulus’ reign came to an end.

In 2004, he was indicted. Paulus pleaded guilty in the federal courtroom in Green Bay to filing a false tax return and taking nearly $50,000 in bribes. And he lost his Wisconsin law license. Paulus served six years in federal prison, including two years on state charges of misconduct in public office and obstruction of justice.

It’s extremely rare for the government to bring criminal charges against a prosecutor. And civil court has its own challenges. Prosecutors have qualified immunity when investigating cases — that’s the same standard that makes it difficult to sue police officers for misconduct. 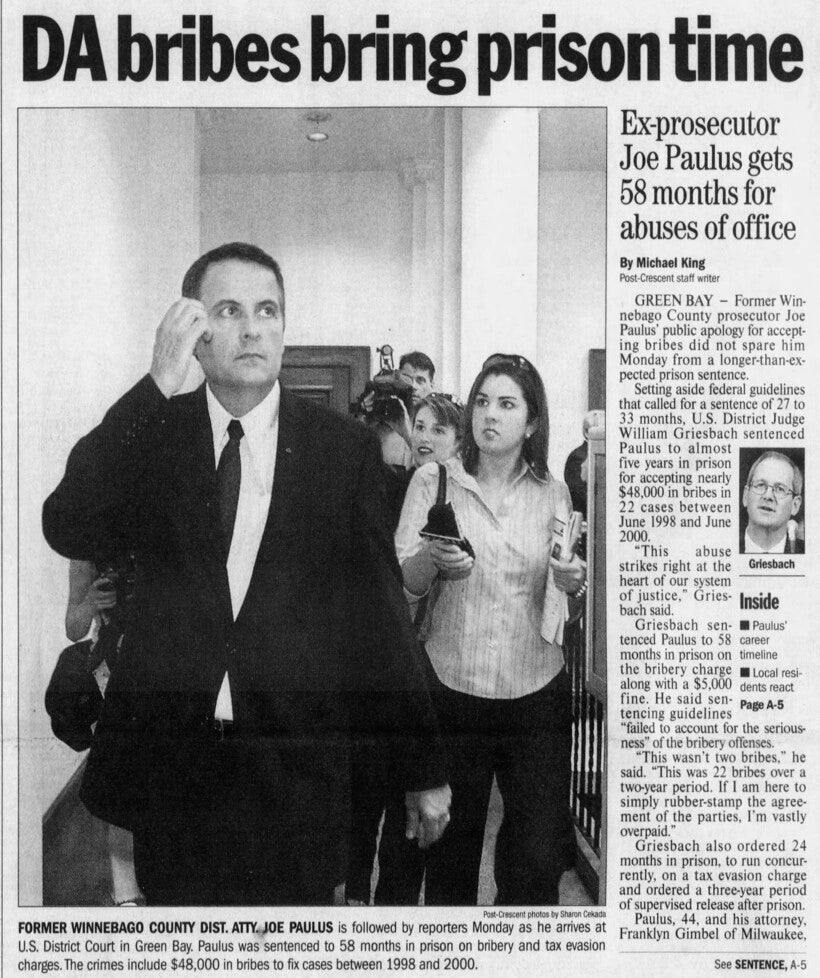 An Appleton Post-Crescent story from Aug., 3, 2004 shows former Winnebago County District Attorney Joe Paulus being followed by reporters upon arriving at the U.S. District Court in Green Bay, Wis., on Aug. 2. Paulus was sentenced to four years and 10 months in prison for taking $48,000 in bribes to reduce or dismiss cases and for tax evasion. Appleton Post-Crescent via Newspapers.com

Prosecutors have something even more powerful — absolute immunity — for their actions in a courtroom, and while preparing a case for trial. That means "they’re completely protected," says Valena Beety, a law professor at Arizona State University.

She says prosecutors have gotten away with a lot because of absolute immunity.

She adds, "This is why reforming both absolute immunity and qualified immunity are such a big deal, such a big concern right now."

In that secret court hearing, Lingnofski told state Department of Justice attorneys that Paulus once said to him, "Never let the truth get in the way of a conviction." Paulus’ own conviction raises the question: What was he doing in other prosecutions?

And what, if anything, did Biskupic learn from Paulus?

Next on Open and Shut: We examine the case of Mark Price — the man prosecuted by Biskupic for allegedly putting out a "hit" on Paulus.

To hear the podcast, go to Open and Shut (wpr.org/openandshut) or wherever you get your podcasts. The nonprofit Wisconsin Watch collaborates with WPR and other news media and the University of Wisconsin-Madison School of Journalism and Mass Communication. All works created, published, posted or disseminated by Wisconsin Watch do not necessarily reflect the views or opinions of UW-Madison or any of its affiliates. This story is a collaboration between Wisconsin Watch and WPR as part of the NEW News Lab, a consortium of six news outlets covering northeastern Wisconsin.

Special thanks to WPR's Marketing Team for their organizational support.