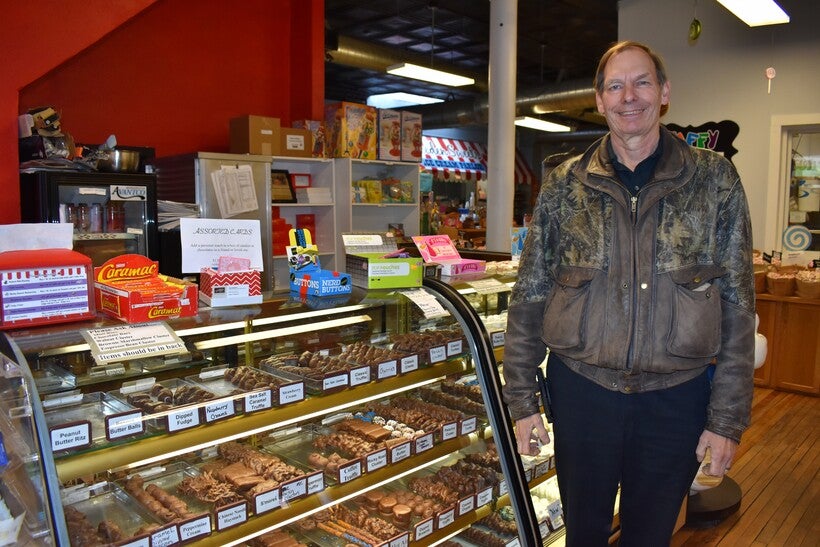 Making sweets has been a family tradition for Dan Klarner and his daughter Amanda Sweeden.

More than six years ago, they decided to share their chocolates beyond just friends and families when they opened Sweeden Sweets on Tower Avenue in Superior. And, they still are. Although, there are now fewer people stopping in to satisfy their sweet tooth at the shop during the coronavirus pandemic.

On Sunday, Klarner said sales are down drastically.

"If you compare this Saturday to last Saturday, we’re at one-seventh of what we normally take in," said Klarner. "It’s gone down sevenfold."

The new rules mean a change in business as usual at the far northern Wisconsin sweet shop, which now provides gloves and tongs to people who want to buy candy. 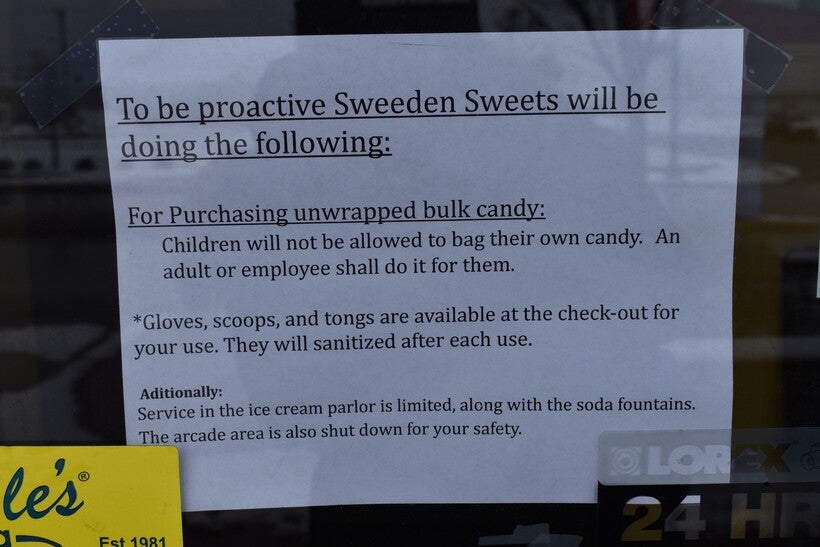 A sign at Sweeden Sweets details precautions the business is taking to prevent the spread of the new coronavirus. Danielle Kaeding/WPR

Customers are still coming in to purchase candy bars and popcorn, said employee Cheyenne Martin. But, she said, only about 40 people came by Saturday when the store is typically teeming with families and kids.

"Everybody is just cautious with touching everything," she said. "I’ve been going around sanitizing everything after everybody leaves."

Because business is slow, Klarner said they’re looking at reducing hours beginning Monday and opening from 11:30 a.m. to 6:30 p.m. Meanwhile, they still have to make payroll and keep the lights on.

He and his daughter are in the process of getting an online menu, and they’re offering curbside pickup while exploring delivery.

It’s a difficult time for businesses amid the restrictions and pleas from Evers and state officials to stay home.

"A low income is better than none at all," Klarner said. "Plus, some of these people who want to work they need to pay their bills as well. So it's hard all around for everybody to get through this time."

Four of his 10-person staff have opted to stay home, one of whom has a family member considered vulnerable to the disease. 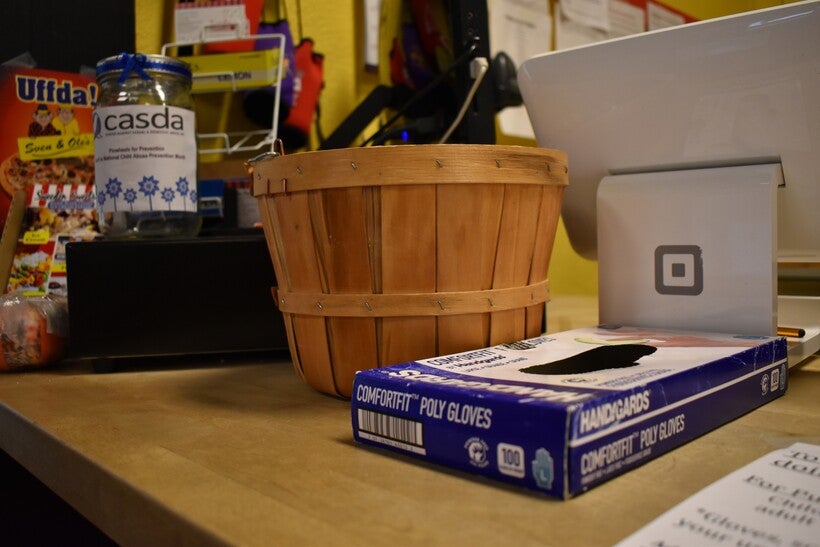 Gloves are available for customers who are buying candy at Sweeden Sweets in Superior. Danielle Kaeding/WPR

In southern Wisconsin, Hankerson’s Country Oven Bakery in West Bend usually has a staff of about 35 bakers, cooks and clerks for its bakery and restaurant. Now, they’re down to about a dozen employees, said Katie Hankerson. The business, which opened in 1970, has been in her husband Ryan’s family for three generations.

She said they’re still keeping the storefront open, but they’re only allowing five people in at a time.

"We’re trying to limit our clerks to five or less in order to accommodate customers coming into the store," she said.

Hankerson said the staff have been "rock stars" while working through the restrictions, and customers have been very understanding. But, they’re urging call-in orders to avoid having too many people in the store at once.

Business was extremely slow the first couple days after the restrictions went in place Tuesday, and they’re still trying to get the word out that they’re open. But, Hankerson said they’re worried about whether they’ll be able to stay open.

"We feel really fortunate that we have been a long-standing business within the community, so we’re hopeful if we do have to close at a certain point and time, that we’ll be able to get back at it eventually," she said.

As businesses struggle financially, some have questioned whether the state has been serious in its efforts to stem the spread of the new coronavirus, including Sen. Lena Taylor, D-Milwaukee. She took issue with businesses that had been forced to clear out while others remained full of customers.

"As a state and city, we are seriously and financially impacting some businesses and activities, while others go uninterrupted," Taylor said in a statement Saturday. "We should not be asking some business owners to share more responsibility than others in the effort to control the spread. It’s unfair."

The governor has said the restrictions on gatherings are necessary to slow and reduce the spread of COVID-19, and those who violate them could be subject to a $250 fine or up to 30 days in jail.

Melissa Baldauff, the governor’s spokesperson, did not immediately return a request for comment Sunday.

Evers has acknowledged the struggles small business owners would face with the order, adding the administration is committed to doing whatever it can to assist them.

Late Friday, the governor announced the U.S. Small Business Administration approved the state’s request for disaster loans for small businesses. Businesses and nonprofits could qualify for up to $2 million in low-interest loans to cover any losses due to the new coronavirus. The process typically takes around five days and loans are awarded about three weeks after approval.

Yet, Klarner noted it’s difficult to understand how much a business might need to borrow with the uncertainty surrounding how long the disease may impact operations.

Evers has said he doesn’t plan on issuing any order to shelter-in-place similar to those in states like Illinois and California.

Wisconsin's Republican legislative leaders have said they support Evers' decision to not issue a shelter-in-place order.

"As we move forward together in this fight to defeat the virus, we must keep in mind that the people we serve need the jobs they have today to help weather this storm," the four leaders wrote. "Continued economic activity will not only help us in our fight against this virus today, it will also ensure that we don't have to fight to recover from economic collapse tomorrow."