Online Dating For Seniors Can Be Intimidating, But You May Be Making It Worse

Sociologist Says Singles Tend To Overestimate How Picky Partners Will Be
By Elizabeth Dohms
Share:

And for older adult singles, with plenty of capacity to love, online dating is one way to match up singles who are looking for love, said University of Washington sociologist and sexologist Pepper Schwartz.

"It’s a big world out there and you can match up with a person who has the values and needs you do," said Schwartz, who used to serve as a love and relationship expert and ambassador for AARP.

For a lot of people, that includes matching up with someone who is willing to be intimate. But in the realities of an online dating world often trying to capture potential partners with flattering photos, the process can be intimidating.

Schwartz said that’s in part because of the reminders that they look different from when they first entered the dating world.

"We look older. Our bodies aren’t the same," she said, also noting that men might be nervous about performance issues.

But further excusing their participation is fear that whoever they meet might take advantage of them or fall into a trap of thinking it’s outrageous for them to think about loving someone again.

"They just get frozen," she said.

People also tend to overestimate how picky their prospective partners might be, Schwartz said, noting that instead of picking out attractive partners, a lot of older adults are looking for what makes a good companion — integrity, competency, economic stability and good character, she said.

If a person looking for love is in poor health, that doesn’t necessarily mean he or she won’t find love, especially if they possess certain desirable characteristics that a potential partner is looking for.

"The fact is, once we become attached to people, it’s not an abstract idea; it’s a personal thing," she said. But maybe don’t start off by disclosing your illness right after you’ve introduced yourself.

Schwartz agrees there’s a stigma surrounding older people dating and believes that might be related to uneasiness that people have about aging in general. But the dating pool for people in their 50s and older is growing more robust, largely because people are living longer and there's a relatively high divorce rate.

In order to access that pool of potential mates, Schwartz said older adults have to take it seriously

"I often tell people, 'Would you just wait at your door, waiting for someone to knock and off you a job?' Of course not," she said. "Guess what? You have to put the work in here, too."

For people who aren’t particularly savvy with computers, Schwartz recommends asking a librarian or someone younger to help set up a dating profile online or follow free tutorials on dating websites.

Match.com is one of the most used dating sites, but more nuanced sites could be more geared toward religion (Christian, Jewish, Muslim) or interests and lifestyles (farming, parents, art).

It might take a while to find the right match, but Schwartz said people who are consistently finding themselves in failing relationships should try a different approach. She said sometimes having a friend of any gender help pick out potential options might help.

"You need somebody who’s maybe got a better picker than you do," she said.

Giving Online Dating A Try As An Older Adult 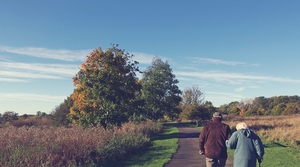 Many people find themselves alone later in life, whether from the loss of a spouse, a divorce or having always been alone, maybe with a little curiousity for what else is out there.