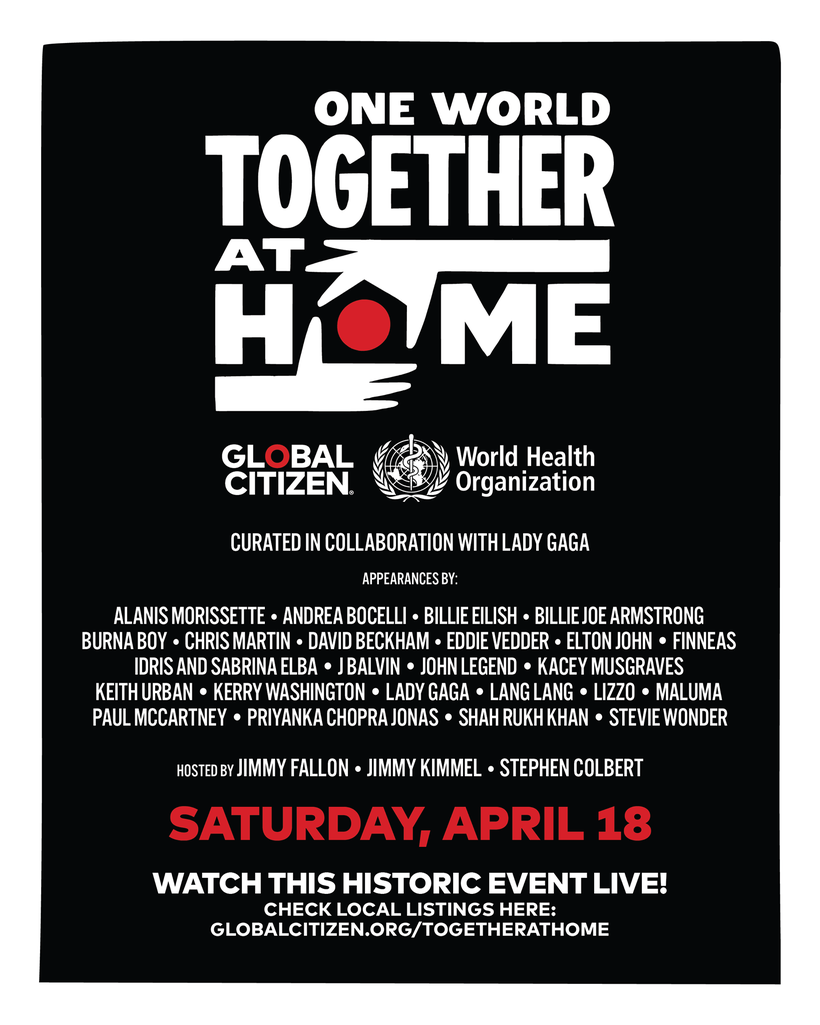 One World Together At Home

The music live-streams that Global Citizen has been webcasting on a daily basis to promote World Health Organization initiatives during the coronavirus pandemic now have a considerably more spectacular outgrowth. The two organizations have announced “One World: Together at Home,” a global special that will be seen and heard across major broadcast and cable networks and digital music providers April 18.

Underscoring the fact that the two-hour special will air, in rarely precedented fashion, simultaneously on ABC, CBS and NBC (among many other platforms), it will be hosted by those three networks’ competing late night hosts: Jimmy Kimmel, Jimmy Fallon and Stephen Colbert.

The talent lineup is described as being “curated in collaboration with” Lady Gaga, who called in to a WHO press conference Monday morning to announce that she’s helped raise $35 million in the last seven days for the org.

The show, set for 8 p.m. ET/5 PT on April 18, will air not just on the three aforementioned broadcast networks but via iHeartMedia and a vast array of cable and international channels, as well as digitally on YouTube, Facebook, Instagram, Twitter, Yahoo, Twitch, Amazon Prime Video, Apple Music, Alibaba, LiveXLive, Tencent, Tidal and TuneIn.

Celebrating health care workers on the front lines of the pandemic will be a crucial component of the special, said Hugh Evans, co-founder/CEO of Global Citizen. “As we honor and support the heroic efforts of community health workers, ‘One World: Together At Home’ aims to serve as a source of unity and encouragement in the global fight to end COVID-19,” Evans said in a statement. “Through music, entertainment and impact, the global live-cast will celebrate those who risk their own health to safeguard everyone else’s.”

The special is not being designed as a fundraising telethon, per se. In announcing the $35 million she and Global Citizen have already raised, Gaga said during the press conference that the hope was to raise money ahead of time and let the show focus more on entertainment and messages of solidarity.

“The World Health Organization is committed to defeating the coronavirus pandemic with science and public health measures, and supporting the health workers who are on the frontlines of the response,” said Dr. Tedros Adhanom Ghebreyesus, director-general of the WHO, in a statement. “We may have to be apart physically for a little while, but we can still come together virtually to enjoy great music. The ‘One World: Together at Home’ concert represents a powerful show of solidarity against a common threat.”

PepsiCo is pitching in to promote the show, with senior VP Adam Harter saying that in seeking to help those affected by the crisis, “we immediately identified Global Citizen as the organization that could help maximize that impact.” Following on the heels of $45 million the company says it’s already invested in bringing resources to communities hardest hit by the pandemic, Pepsi says it’s reallocating some planned advertising to publicize the show and is consulting on everything from marketing to talent procurement.

The daily “Together at Home” webcasts under the Global Citizen aegis in the past few weeks have included appearances by the duo of Shawn Mendes and Camila Cabello along with Legend, Martin, Jennifer Hudson, Common, H.E.R., Hozier, Miguel, Niall Horan, Brandy Clark and dozens of others. The series was created in support of the WHO’s COVID-19 Solidarity Response Fund.