Mia Zutter has always loved running long distances competitively. After the Sun Prairie, Wisconsin, native started losing her vision in middle school, someone recommended she also take up cross-country skiing. So in high school, she did.

The 2018 Paralympics Winter Games are underway in Pyeongchang, South Korea, with some of the world's best athletes competing against each other to take home a medal.

Curling fever is alive and well across the United States after the U.S. Men's Olympic Curling Team took gold at the 2018 Winter Games. For those missing their fix of the game, you’re in luck. The Paralympics kick off this week in Pyeongchang. 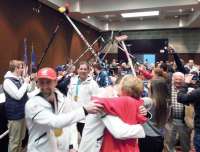 Curling became the butt of jokes for some in the 2018 Olympic Winter Games. But, nobody was laughing as nearly 1,200 people cheered on the U.S. men’s curling team while they showed off their Olympic gold in Duluth Tuesday evening alongside members of the U.S. women’s curling team.

Wisconsin Hockey Represented On Both Sides Of Gold Medal Game 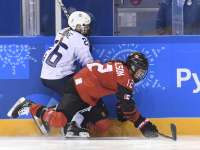 Matt Antoine, a Prairie du Chien, native is one of four skeleton riders on Team USA competing in Pyeongchang. He's hoping to get his second Olympic medal this week after taking bronze at the 2014 Winter Games in Sochi.

Brothers Ben and Adam Loomis have been skiing since they were toddlers. Their family first strapped them into their skis while they were growing up in Eau Claire. Now, the siblings are two of the best Nordic skiers in the world, with one of them, Ben, participating in Nordic combined in the 2018 Winter Olympics.

Ski jumping is one of the most exhilarating Olympic sports, but also one that requires intense concentration. Wisconsin native and Olympic ski jumper Nita Englund knows that as well as anyone. She's one of three American women who participated in the event in the 2018 Winter Olympics in Pyeongchang, South Korea.

Olympic Speedskaters Gear Up For 2 Weeks Of Competitions In Pyeongchang

As people across the globe tune in to watch or listen to the Olympic games, some Wisconsinites may want to keep a closer eye on how athletes from Wisconsin are doing in the Olympic Games.

A La Crosse athlete will represent Team USA in the Paralympic Games after only training 18 months as an archer. 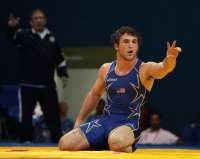 Greco-Roman wrestler Ben Provisor, a Stevens Point native, is aiming for a medal in his second Olympics. 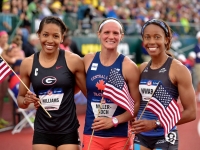 Heather Miller-Koch, originally of Columbus, Wisconsin, will compete in the heptathlon in the 2016 Olympic Games in Rio.

Alvin Kraenzlein of Milwaukee was a pioneer in hurdling. He perfected the technique used by hurdlers to this day. Kraenzlein is the only track and field athlete in history to win four individual gold medals in one Olympic Games.

Wisconsin-born rower Megan Kalmoe is headed to her third Olympics. She’s a veteran, an elite rower on the U.S. women’s national rowing team and a bronze medalist at the 2012 Olympics in London. She was twice named U.S. Rowing’s Female Athlete of the Year -- in 2014 and 2015.

With that record, you might think the St. Croix Falls native had been rowing her whole life. But Kalmoe stepped into the boat for the first time in 2002 as a student at the University of Washington.

"I really learned everything I knew about the sport from that first couple of months at the...

Michael McPhail of Darlington is competing in his second Olympic Games.

University of Wisconsin-Madison senior and swimmer Matt Hutchins will compete in the Rio Olympics this month. Hutchins will swim for his native country, New Zealand.

Wisconsin native Annie Haeger and her teammate, Briana Provancha, will be sailing to represent the United States in Rio de Janeiro’s Guanabara Bay at the Summer Olympic Games.

Becca Murray of Germantown will be competing in her third Paralympic Games in Rio come September. She started playing wheelchair basketball at age 11. 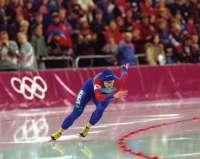 Since the 1900 Olympic Games in Paris, Wisconsin has been sending its top athletes to represent the United States. 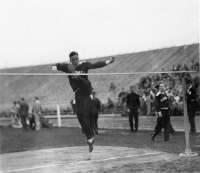 McGinnis was hailed as "one of the greatest athletes ever developed in the Western Conference" for his college track career. He excelled in the high hurdles, the high jump and the pole vault.

It was there, under the guidance of Murphy,... 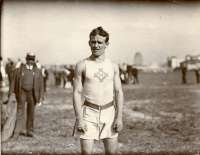 One of the world’s top sprinters in the early 20th century was a Dodgeville native.