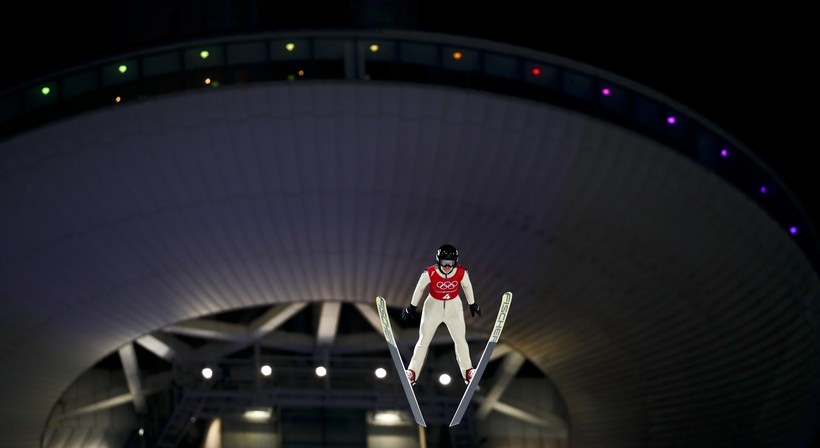 Ski jumping is one of the most exhilarating Olympic sports, but also one that requires intense concentration. Nita Englund makes an attempt during a training session at the Nordic Skiing World Championships in Falun, Sweden, in 2015. Matthias Schrader/AP Photo

Wisconsin native and Olympic ski jumper Nita Englund knows that as well as anyone. She's one of three American women who participated in the event in the 2018 Winter Olympics in Pyeongchang, South Korea.

It's the first Olympic Games for the 25-year-old from Florence, Wisconsin.

Englund was eliminated Monday in the ladies’ normal hill individual competition. She finished 31st, and the Top 30 moved on to the final round.

Brady Carlson: What we see during ski jumping must be very different from what you experience. Walk us through what you see at the top of a jump.

Nita Englund: I always tell people that ski jumping is like golf, except we're the golf ball. It's a focus sport, but it's also a bit of risk and adrenaline. We get close to 60 miles per hour, it's about 55 miles per hour on a lot of hills.

When you hit the takeoff, you have to jump — timing is very, very important. You're basically jumping mostly straight up, and the speed carries you and you go into your flying position. You're trying to carry as much speed as possible — you're trying to go around 90 meters (almost 100 yards), depending on the hill.

In Pyeongchang, we want to be going around 90, maybe some meters further. And then we're landing and we put one foot in front of the other in a telemark position. And then you slow down and stop.

BC: And then everybody cheers because you just did such a great job.

BC: You mentioned that timing is very important. How fine is the line between a jump where everything goes the way you hoped it would versus the one that doesn't?

NE: It's extremely fine. Timing is one thing I've struggled with more than anything; I'm better at flying than I am at the takeoff. If you screw up the timing on a ski jump, you basically don't have a chance to recover that jump.

Timing is all about feeling on the ski jump. You can try going off of a visual reference, but really the ski jump tells you when you have to go, because you're going through the radius, and gravity is pushing and pushing down on you. The milliseconds that the gravity stops pushing on you is when you have to start jumping.

BC: It's not a huge surprise that a ski jumper would come from Wisconsin given how much winter we typically get, but how did this all get started for you, and what was it that made you see a ski jump and say, 'I'd like to get up there myself and try this?'"

NE: I grew up on the border of Wisconsin and the UP, northern Michigan. There's one ski jump there called Pine Mountain, it's one of the largest artificial ski jumps in the U.S. It has a huge ominous tower.

I started because my brother started before me. I remember him building jumps on our farm. I think it was a few years later that I was jumping at our club on small ski jumps, and you just work your way up. I think I didn't jump a large, 120-meter (jump) until I was 15 years old. It takes a long time to train (for) that.

BC: I've heard you compare the feeling of jumping to flying. Given how much focus you have, how much you have to keep track of, do you still get to enjoy the sensation that you had when you started even as you compete at this high level?

NE: Definitely. When you have a good jump, it kind of matters more that you had the good jump than what the result was. You get out on the air and you usually know instantly, this is a good jump, this feels awesome. And it lasts forever. We're in the air for maybe three-and-a-half, 4 seconds, but it feels a lot longer than that. You remember those jumps for the rest of your life.