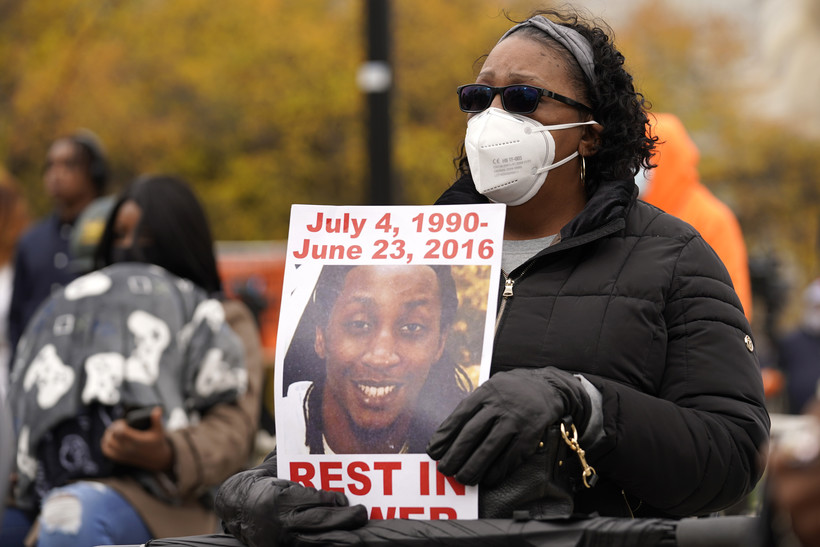 Jay Anderson Jr.'s mother, Linda Anderson, holds a sign on Oct. 29, 2020, during a rally in Chicago. Special prosecutors are deciding Wednesday, June 1, 2022, whether to charge former Wauwatosa Officer Joseph Mensah, who shot and killed Anderson Jr. after discovering him sleeping in a park after hours in June 2016. Nam Y. Huh/AP Photo

The officer who killed Jay Anderson Jr. in a Wauwatosa park will not face charges

No charges will be filed against a former Wauwatosa Police officer in the killing of Jay Anderson Jr. in 2016.

At a hearing Wednesday, special prosecutors announced they would not pursue charges in the case. They said after a lengthy investigation they believed they would not be able to convince a jury to convict Joseph Mensah of homicide.

Special prosecutor Scott Hansen said the key to that decision was a squad video that showed the shooting. He said footage showed Anderson with his hands raised, then lowering his hands and reaching in the direction of a gun in the seconds before Mensah fired his gun.

Special prosecutors also showed the video to a mock jury and to legal experts including lawyers and judges, Hansen said.

"The overwhelming result of all of that is that people believed that the motion that Mr. Anderson made seconds before he was shot was enough to cause someone in Mensah’s position to fear that if he didn’t shoot first, he was going to be shot himself," Hansen said.

"I don't think anyone should feel good about this," Gruenke said. "Police shouldn't feel like this is the way you should do things or is the outcome we want."

Kimberley Motley, the attorney representing Anderson’s family, rejected the special prosecutors' analysis. She filed a motion released Wednesday calling for the special prosecutors to withdraw. But Milwaukee County Circuit Court Judge Glenn Yamahiro said he was satisfied with the report and accepted their findings. He rejected Motley’s motion.

Yamahiro called the shooting a tragedy that could have been avoided, but said it was “a separate and completely distinct question from what is provable beyond a reasonable doubt.”

"I think it’s clear in the previous record that Officer Mensah did not follow his training here in many respects, and to that extent there is certainly an argument to be made that he created the risk that led to the shooting of Mr. Anderson," Yamahiro said.

But the judge said a past Wisconsin Supreme Court decision makes that argument irrelevant in trying to prosecute a case where a defendant argued self-defense.

Yamahiro raised concerns over the nature of the investigative process within local police, calling it "well-intentioned" but "fatally flawed."

"These things can be changed," Yamahiro said. "It takes, I suppose, electing those who are willing to do so."

After the hearing, in a press conference separate from the prosecutors, Motley said while laws should be put into place to hold police accountable, that doesn’t go far enough.

"We have this case right now, we can't keep kicking the football down the road and say, 'Oh, we're gonna do it next time,'" Motley said. "No, let's do it this time. Let's do it right now."

After the hearing, supporters of Anderson chanted his name outside the courtroom.

"You can see the pain that the family has gone through," Hansen said. "This wasn’t fair to them, they didn’t do anything to deserve this, and I’m only sorry that there’s nothing that we can do to help heal those wounds."

In a press conference, Motley said there are plans to subpoena Mensah. Motley said a civil case against Mensah in federal court will continue.

Linda Anderson said she felt the time spent on the investigation of her son’s death was for nothing.

"We’re not finished," she said. "I want Joseph Mensah in jail, so we’re going to continue to fight."

Mensah has said Jay Anderson Jr. was reaching for a gun when he shot and killed him after finding Anderson sleeping in the car in a park after hours in June 2016.

Anderson, 25, was one of three people Mensah killed during a five-year stint at the Wauwatosa Police Department.

As Wisconsin Public Radio previously reported, Mensah, who is Black, was involved in three on-duty fatal shootings while he was a Wauwatosa Police Department officer. Milwaukee County District Attorney John Chisholm declined to file charges against Mensah in the shooting deaths of Antonio Gonzalez, Anderson and 17-year-old Alvin Cole. Chisholm said the shootings were in self defense.

Mensah resigned from the Wauwatosa department in November 2020, following the killing of Alvin, and joined the Waukesha County Sheriff’s Department.

Motley used a rare legal process to pursue charges against Mensah in connection with Anderson’s shooting, according to the Milwaukee Journal Sentinel.

Special prosecutors were appointed in December to review the case.  Yamahiro ruled in July that there is probable cause Mensah committed homicide by use of a dangerous weapon when he killed Anderson.

According to a Milwaukee Police Department report, Mensah noticed Anderson had a handgun in the front passenger seat while the men were speaking. Mensah drew his weapon and ordered Anderson to put his hands up. Anderson raised his hands, but according to the report, "on at least four occasions Mr. Anderson started to lower his right arm while leaning toward the front passenger seat where the gun was located." The report said Anderson "lunged toward the gun with his right hand" and Mensah shot him five times in the head and once in the right shoulder.

Motley, the Anderson family's attorney, has said she doesn’t believe Anderson was reaching for his gun. Instead, she said he was tired, and his hands were falling forward. A toxicology report found Anderson to be legally intoxicated.