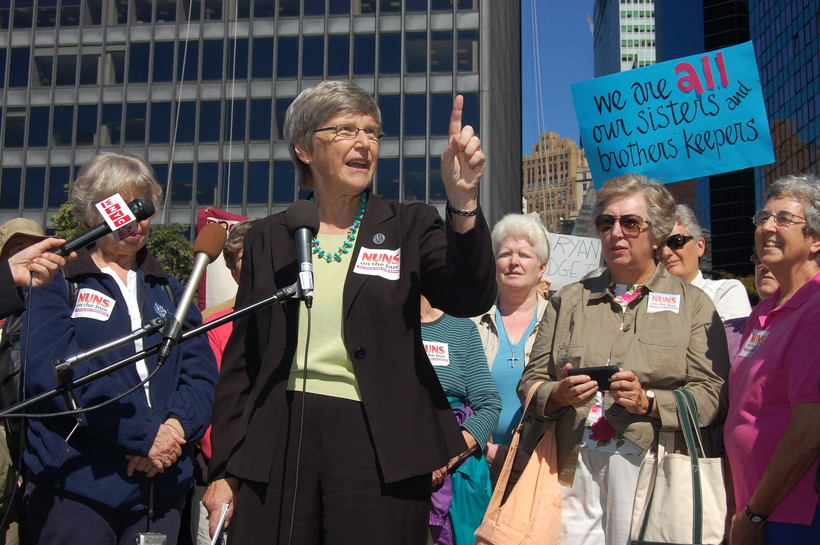 Sister Simone Campbell, the leader of Nuns on the Bus, speaking in lower Manhattan in 2012. Wikimedia Commons.

Group Aims To 'Mend The Gaps' In A Heated Election Season
By Haleema Shah
Share:

In 2012, a group of Roman Catholic nuns made a 2,700 mile road trip through nine states to highlight social justice issues around the country.

Four years later, the sisters are on their fifth tour through the Midwest and eastern parts of the country. This time, they’re beginning in the Madison area with their first stop in Janesville.

The tour, called "Mend the Gaps: Reweave the Fabric of Society," looks to "close the vast and growing economic divides" in the U.S. during an especially polarizing election season.

The group hopes to bridge the chasms within society by doing everything from funding a new census to changing the tax structure, said Sister Simone Campbell, executive director of NETWORK Lobby for Catholic Social Justice and leader of NETWORK’s Nuns on the Bus group.

"Too often, we’re giving tax cuts to those at the top, but you know what? It’s adversely impacting those at the bottom," she said. "We all have to contribute to the common good."

The group will hold different events at various stops, like "blessing the bus," where attendees commit to mending the gap and sign the bus that the nuns travel in, as well as holding their own caucuses and site visits.

Janesville's unique political makeup makes it the first stop on the tour, as the central topic of this year’s tour is societal divisions, Campbell said. The area is represented by House Speaker Paul Ryan, a Republican, and U.S. Rep. Mark Pocan, a member of the Congressional Progressive Caucus.

"We thought that any area that could be represented by two such different folks created the possibility for dialogue and engagement," Campbell said. "That's the perfect place to learn how to mend the gaps because certainly their political perspectives are dramatically different, but it’s one people in one county."

The Nuns on the Bus first hit the road to highlight social justice issues and protest a federal budget that was proposed by Ryan, who cited his Catholic faith when he proposed the budget cuts. But the members of Nuns on the Bus opposed it, arguing that the proposal would help the rich at the expense of the poor.

Campbell, who is also an attorney and poet, described engagement in the political world as a challenging, but necessary expression of her faith.

"In our society, in a democracy, the way we make our values seen is by stepping into that political world. It’s much easier to do direct service and do charity," she said. "Doing this political work is hard, because I have to listen to people who disagree with me, I have to figure a way out that includes them as well as my perspective, and together we can move forward."