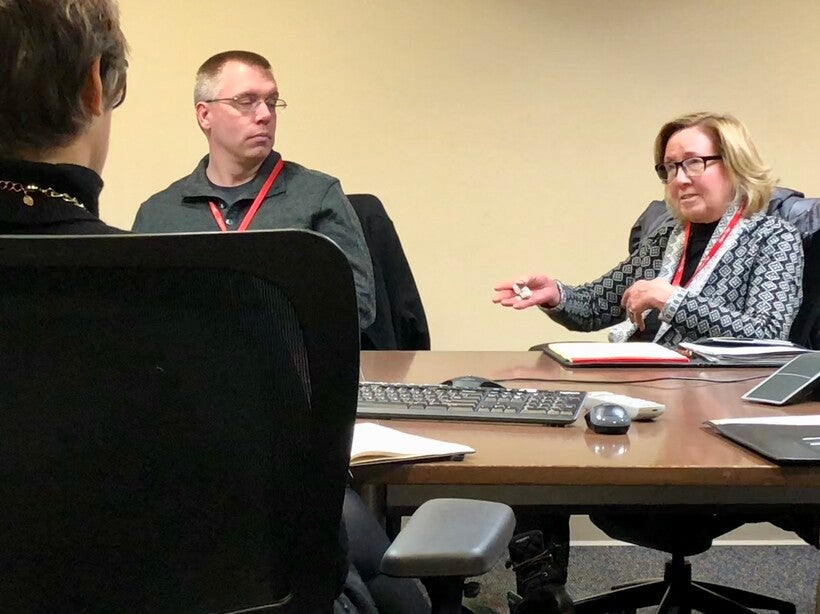 Douglas County Health and Human Services Director Pat Schanen (far right) speaks with officials from the Wisconsin Department of Children and Families as part of Superior Days in Madison on Feb. 12, 2019.
Danielle Kaeding/WPR

The growing cost for counties to place children outside the home and the increase in child protection caseloads prompted northern Wisconsin officials to ask the state for more funding as part of Superior Days in Madison this week.

Douglas and Bayfield county officials asked the Wisconsin Department of Children and Families to set aside more money to hire workers, reduce caseloads and offset costs to counties.

Counties are struggling to meet the needs of children and families due in large part to more cases and costs related to parental substance abuse.

"It’s really about being able to serve families and children at the engagement level that we’d like to in order to help make change with families and get kids to permanency," she said.

Wehmas said the high caseloads mean social workers are spending less time working with families to help reunite them with their children.

In nearby Bayfield County, each social worker oversees about 15 cases. Officials there have struggled to retain workers who move to take positions in other counties with higher pay scales, said Bayfield County Human Services Director Elizabeth Skulan.

"We have social workers who just don’t want to work in child protective services because of the stress involved and the fact that they don’t feel that they can do the best for their families," Skulan said.

The county is working with children at younger ages and intervening earlier due in part to methamphetamine abuse, said Bayfield County Family Services Manager Cheryl Hanson.

"In Bayfield County, one of our issues is we’ve had an increase in the cost of out-of-home care. When we have to remove a child, whether it’s in a foster home or residential treatment placement, those costs continue to increase every year and those costs are absorbed by the county," Hanson said. "Those are mandated services that we continue to have to pay." Wisconsin Department of Children and Families Secretary-designee Emilie Amundson said the Wisconsin Counties Association is asking for $30 million each year under the next budget.

"I think that there is a recognition and a need that the closer we can get to that dollar number the better chance we have with stemming this crisis," Amundson said.

Amundson said a funding request by the previous administration is not enough to address counties’ concerns.

Gov. Scott Walker and state lawmakers approved an annual $5 million increase to children and family aids payments under the 2017-19 budget, as well as increased foster care rates by 2.5 percent.

"We’ve seen five years of not enough funding for our child welfare system," said Amundson. "This is not a Milwaukee issue. This is not a northern issue. It’s an every county issue."

Amundson didn't provide any details about what specific amount the agency is requesting under the next budget.

"Secretary-designee Amundson has been in conversations with the Governor’s Office about what is best for our kids and potential ways to address the need for more resources," wrote DCF spokeswoman Gina Paige in an email.

The number of children in out-of-home care has remained largely unchanged over the last six months with 7,859 kids living outside the home statewide as of January this year.