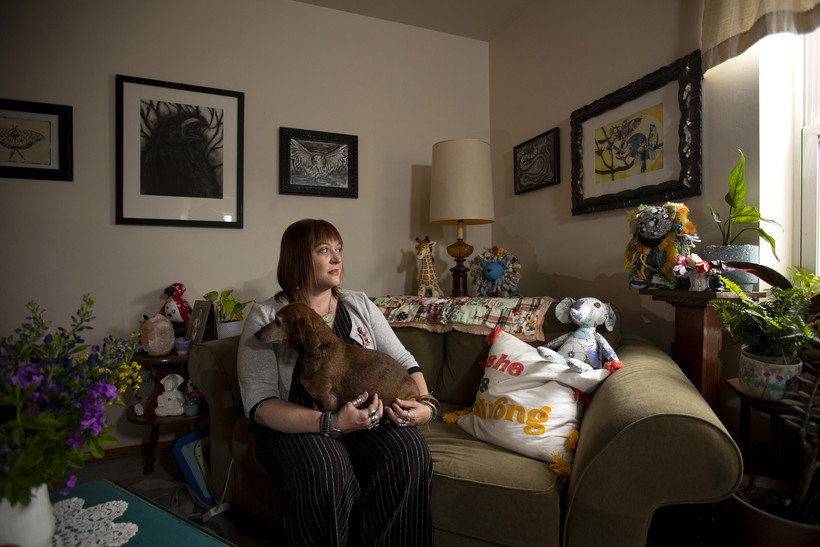 Stacey Burkhart, head of SAGE Green Bay and the owner of a small business, Eight Trees, poses with her dog Daisy for a portrait in her apartment. Burkhard said she struggled to qualify to rent an affordable apartment and only found hers thanks to a tip from a friend. Samantha Madar / Green Bay Press-Gazette

Stacey Burkhart is a community leader.

She's the head of SAGE Green Bay, an organization that fosters the arts in the area, and the owner of Eight Trees Co., where she makes stuffed animals with clothing that has special value to the customer. Besides planning events and connecting artists at SAGE Green Bay, Burkhart is an advocate for artists getting fairly compensated and community building. She's passionate about the arts, her work for the community and being accessible and present for her three children.

Despite her involvement, Burkhart struggled to find a place to live in the very community she served as she transitioned to life as a single mother of three children.

Burkhart began her search for a two- or three-bedroom apartment on the internet, looking for something that would have enough space for her 6-year-old twins, a third child, age 8, and her dog. It was hard to find anything for under $900 per month, and qualifying to rent was difficult.

"Not only was it my income was too low, but being self-employed — other than using my Schedule C for my taxes — proof that my income was sustainable didn't exist. I wasn't getting a paycheck from some corporate job," Burkhart said.

Though the math isn't straightforward, Burkhart estimates she makes about $12 an hour as a self-employed person.

In December, she lucked out when a friend told her about an affordable apartment opening – 3 bedrooms for $800 a month in Pulaski. Someone that friend knew had just bought the building. She moved into the apartment in April.

"But had my friend not known my situation, I wouldn't have found this place because I really believe the only reason I came into this home was because it never hit the market," Burkhart said.

Burkhart is far from the only person to face stiff competition for the limited number of lower-priced housing units on the market. This tight housing market begs the question, how did we get here? And if there's so much demand for affordable housing and people willing to pay for it, why aren't developers supplying more of that type of housing? 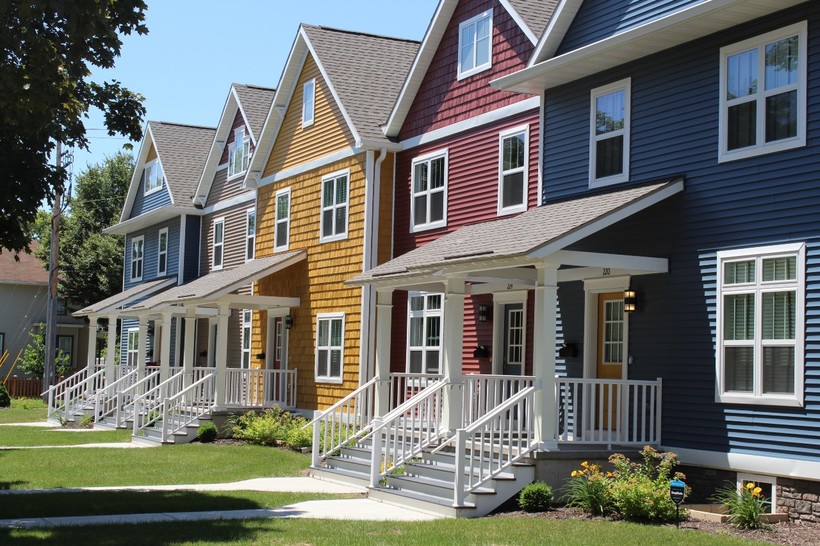 Townhouses built by NeighborWorks Green Bay in 2018 in the city's Navarino Neighborhood are among recent construction projects that aim to increase the availability of affordable housing in the Green Bay area. Green Bay Press-Gazette

How Bad Is The Shortage?

There's a shortage of more than 119,000 rental housing units in Wisconsin, according to data organized by the National Low Income Housing Coalition.

Northeast Wisconsin is no exception to that shortage: 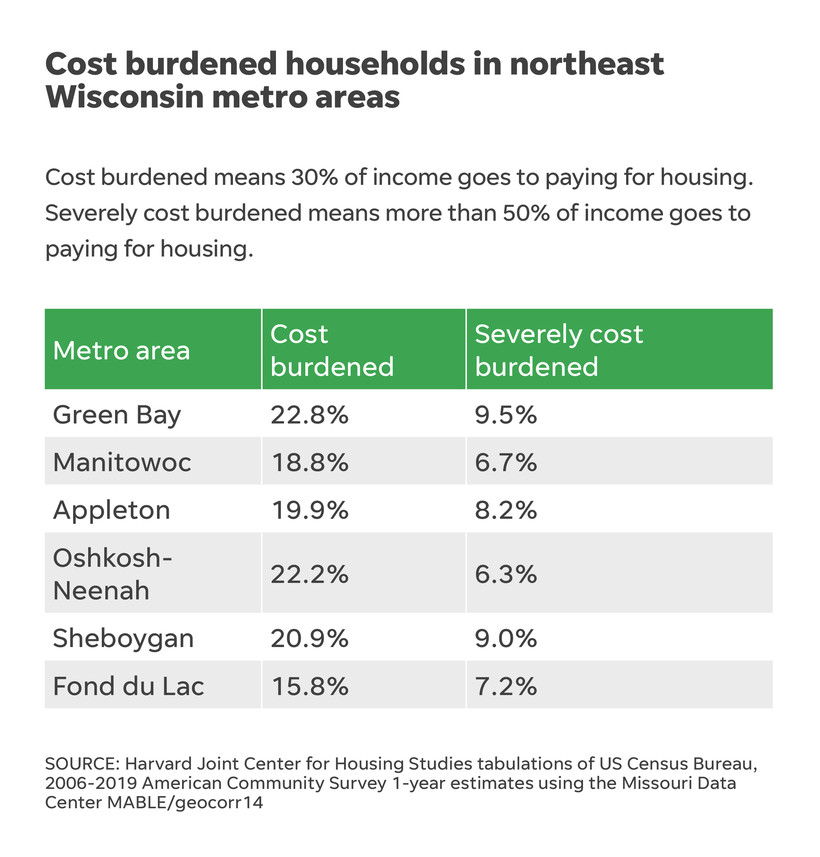 How Do You Define 'Affordable'?

Nonprofits, advocates, and governments generally regard a housing unit to be affordable if it costs one-third of a person's income.

The federal government regards a household as "cost burdened" when the percentage of income they pay for housing exceeds 30%. Households that pay more than that for rent or a mortgage generally struggle to make ends meet and can end up having to choose between paying rent and covering other living costs. 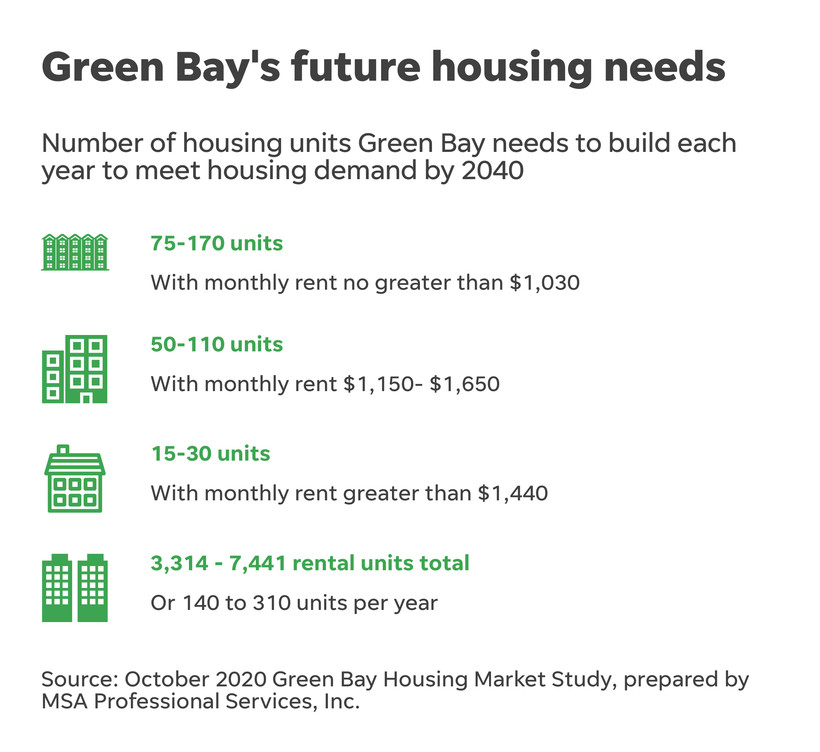 If So Many People Need Housing, Why Won't Developers Build More Housing Units?

Economics 101: if there's demand for something, suppliers will meet that demand. There are paying buyers, after all.

But that's not the case for the lower end of the housing market. Despite the demand for affordable housing and buyers willing to pay for it, developers aren't rising up to meet that demand.

Cheryl Detrick, president and CEO of NEWCAP, says the reason is simple: Developers find it too expensive and unprofitable to build lower priced housing. 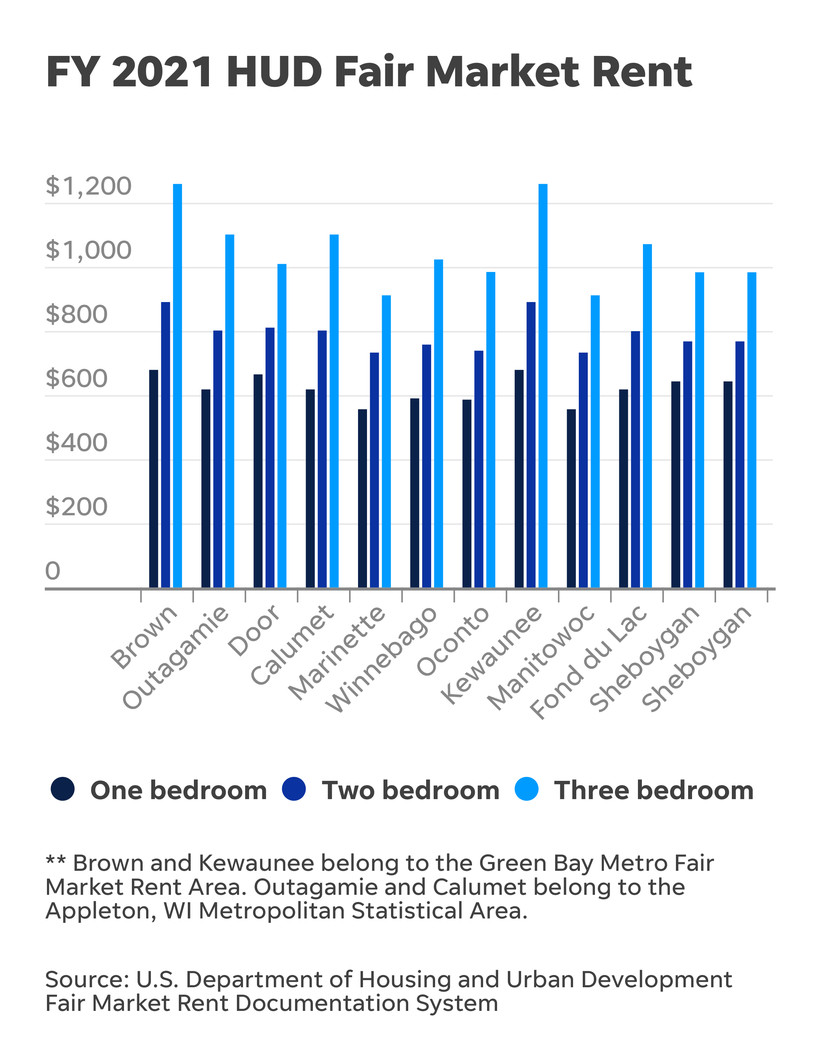 She said she also understands that landlords and developers want to maximize their dollars and sell higher-rent units because there's less risk for a landlord.

"So it's easier for a developer to build mid-range and higher-end rental units than it is to build on the lower end," Detrick said. "Because on the lower end you start to deal with employment issues and credit issues and some fluidity going on there that you don't have as much of in the mid- and high-end."

However, she noted, there is a community benefit to figuring out how to provide affordable housing and how to help property owners manage those risk and cost challenges.

Tax Credits Could Help Offset The Costs, But There's Strong Competition For Such Credits

With the cost of construction skyrocketing, it's expensive to build housing and keep the rent affordable.

“The only way you can do that and build affordable units is if you are getting tax credits to offset the cost," Detrick said. "Because you’re not going to make enough in rent to do mortgage.”

"That is an opportunity that can be used, but we just don’t see it enough in any of our communities," Schnurer said.

Here's an example of how it works at a site in Marinette, where NEWCAP is building 45 affordable apartment units.

Just the cost of construction, Detrick said, without any add-ons is about $7.5 million. Low-income housing tax credits through the Wisconsin Housing and Economic Development Authority brought $6.2 million. The remainder was financed with a mortgage that was small enough to allow NEWCAP to keep the rents affordable.

"So if I wasn't getting the tax credits, it would be a financial impossibility for us to build the building and house people who are lower income. And very low-income would be nearly an impossibility,” Detrick said.

One solution on the supply-side of the housing market, Detrick said, is to expand the available tax credits, which for years have been able to fund only a portion of the requests for assistance.

WHEDA received funding requests worth $61 million, exceeding the $31.9 million available from the agency through state and federal programs in 2020.

This year was similar, with $35 million in tax credits available and $57 million worth of requests.

Another potential solution is increasing people's income so they can pay higher rent, Detrick noted. That would address the ability-to-pay side of the equation.

Raising the minimum wage has long been shot down on the state and federal level.

While some neighboring Midwestern states have increased their minimum wages, Wisconsin remains at the federal minimum of $7.25 per hour, which was last raised in July 2009. 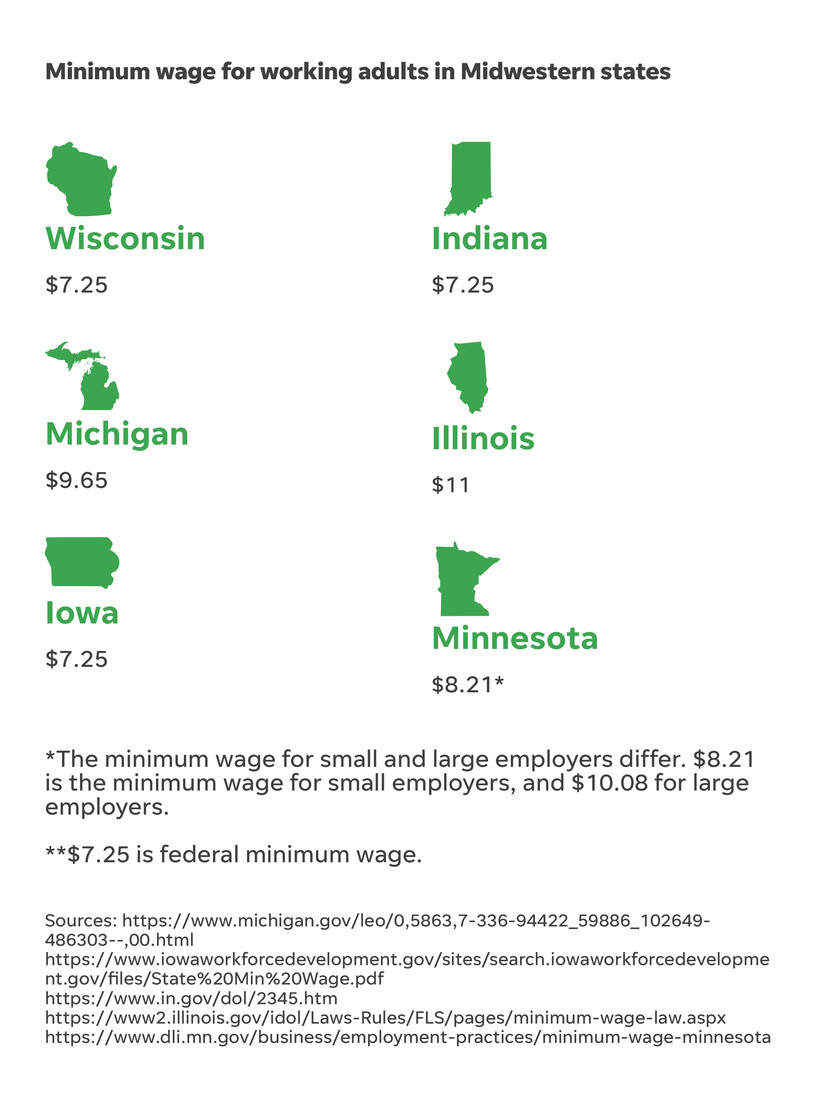 Twelve years later, that $7.25 does not carry the same weight that it did in 2009. According to the U.S. Bureau of Labor Statistics' Consumer Price Index Inflation Calculator, a worker would need to earn $8.97 an hour to have the same buying power as $7.25 an hour in 2009. The calculator uses the Consumer Price Index, which tracks the month-to-month change in prices consumers pay.

The price index takes into account subcategories too, like food, housing, and household energy. The cost of living is accelerating, with inflation increasing at the fastest rate in more than a decade as the national economy recovers from the coronavirus pandemic. Prices increased 4.2% from April 2020 to 2021, according to the Bureau of Labor Statistics most recent, not seasonally adjusted, report. This is the largest increase in prices since 4.9% during in the period between September 2007 and September 2008.

Editor's note: Jeff Bollier of the Green Bay Press-Gazette contributed to this article.