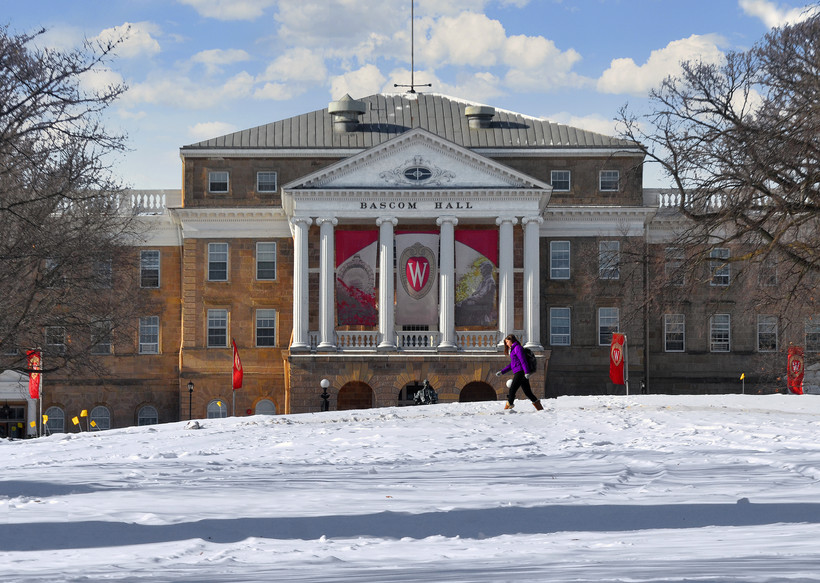 A student walks in front of Bascom Hall on the UW-Madison campus. Richard Hurd

As most University of Wisconsin System campuses grapple with consistent enrollment declines, some have increasingly relied on out-of-state students to fill the gap. That's brought in more tuition revenue along with some concerns about limited access for state residents.

Over the past decade, after the university system lifted caps on out-of-state enrollment, the number of freshmen from outside Wisconsin enrolling at state universities has grown by more than 63 percent. At the same time, the number of freshmen from the Dairy State has declined by 20 percent. That shift came as Wisconsin's state universities were operating under a tuition freeze for in-state students, a freeze that does not exist for those from outside Wisconsin.

In a statement to Wisconsin Public Radio, UW System spokesperson Mark Pitsch said the growth of out-of-state students is good for universities and the state.

"We are in a war for talent," said Pitsch. "The UW System’s mission is to attract and educate Wisconsin students, and our new Wisconsin Tuition Promise will expand opportunity even further for Wisconsin residents as a cornerstone for making it affordable and accessible. Yet as the state’s top talent magnet, it’s a good thing that we’re drawing students from across the country to our top-notch universities, which provide opportunities to build our workforce here."

Most of the increase of new students from out of state comes from UW-Madison. The number of new freshmen categorized as nonresidents at the flagship university more than doubled from 1,997 in 2012 to 4,033 last year. During the same span, the number of freshmen from Wisconsin grew by 227 or 6.4 percent.

Other schools like UW-Milwaukee, UW-Green Bay, UW-La Crosse, UW-Stout and UW-Oshkosh have seen enrollments of nonresident freshmen grow by between 45 percent and 110 percent, though overall numbers are a fraction of those at Madison.

More nonresident students means more revenue for all state universities that were barred by state lawmakers from raising residential undergraduate tuition for nearly a decade. The freeze was lifted in 2021, but UW System officials haven't proposed increasing what undergraduate students from Wisconsin pay. That's saved students and families money, while driving universities to pull from tuition fund balances to keep up with rising costs.

With no restrictions on nonresident rates, universities like UW-Madison have increased tuition for students from outside Wisconsin. Annual tuition for nonresidents at UW-Madison is $37,904, four times higher than the $9,273 sticker price for Wisconsin students.

The growth of nonresident students at UW-Madison accelerated after the UW System Board of Regents tweaked caps on out-of-state enrollment at the campus in 2015 and again in 2019.

A 2018 blog post by former UW-Madison Chancellor Rebecca Blank estimated that would mean around $16 million in additional tuition revenue over two years. She said that could be used to fund new faculty and staff positions along with funds for student programs and experiences.

Tom Harnisch, vice president for government relations with the State Higher Education Executive Officers Association, said he's not aware of many other states with limits on nonresident enrollments, and it's not uncommon for well-known universities to look beyond their borders in the face of state budget cuts.

"And then when you combine that with mandatory tuition freezes, universities will look for ways to bring in additional revenue," Harnisch said. "And certainly for flagship universities, they can market to out of state students who are or willing to pay those higher rates."

"The number of students graduating from Wisconsin high schools is falling," said Scholz. "At the same time, we wanted to expand capacity and provide greater access to the world-class education that we provide at UW-Madison."

In fall 2022, students from outside Wisconsin and Minnesota made up 46.6 percent of the university's freshmen class. Nonresidents accounted for 40 percent of the entire undergraduate student body that year.

As the percentage of students from outside of Wisconsin has grown at UW-Madison, Scholz said the school has used the additional revenue to support student services and financial aid. All the while, he said, the university maintains its commitment to citizens and is enrolling a larger share of Wisconsin high school graduates than in prior years.

MGR Govindarajan, the legislative affairs chair for Associated Students of Madison, a student government group, told WPR he doesn't think most students notice the mix of students from Wisconsin and other places. Govindarajan said more nonresidents boosts diversity on campus but also affects an ongoing shortage of affordable housing in Madison.

He also cited state cuts to UW System budgets and the extended residential tuition freeze as a main driver of the current situation.

State Rep. Dave Murphy, R-Greenville, said he understands "some of the issues with the tuition freeze" but points to recent increases in tuition reserves, carried by universities from one year to the next, when addressing claims the freeze and GOP cuts to higher education are driving the growing numbers of out-of-state students.

"I don't know whether it really allows them (UW-Madison) to plead poverty here because, you know, money to me is not an issue here."

Murphy said he doesn't mind the state's regional universities growing the numbers of out-of-state students because they have empty seats. But he said he worries UW-Madison may be giving preference to nonresidents to boost revenues.

"If you are limiting Wisconsin students because you're bringing in students from out of state, then it does become an issue," Murphy said.

John Drew was appointed to the UW System Board of Regents by former Democratic Gov. Jim Doyle serving from 2008 until 2014. In 2012, he and other board members set the 27.5 percent cap on nonresident undergraduates at state universities. Drew has a somewhat similar concern about the changing mix of students and potential access issues at UW-Madison.

But if out-of-state students are being prioritized, Drew said he lays the blame on GOP austerity measures like the freeze and cuts to the UW System, like a $250 million reduction in 2015.

"It's a political issue, and it is the actions of the gerrymandered Republican majority that is actually harming Wisconsin kids' chance to go to Madison," Drew said.