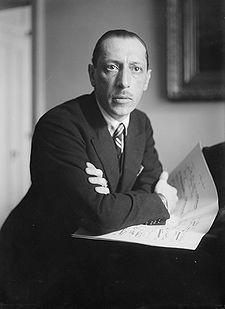 No Conductor in the World

During the summer of 1921 Igor Stravinsky was in London, where his Symphonies of Wind Instruments was to be performed for the first time as part of a program conducted by the distinguished Serge Koussevitsky. Stravinsky dedicated the work to the memory of Claude Debussy, but he didn’t expect any great popular success with the symphony because he had written it to appeal to the intellect rather than attempting to please his audience by playing on the emotions. He later described the work as “an austere ritual” that consisted of “short litanies” between groups of instruments that didn’t provide any great dynamic contrast.

And for listeners enthralled with Stravinsky’s Rite of Spring, the soft chanting of flutes and clarinets was likely to come off as less than revolutionary.

Stravinsky was prepared for all of those objections from the audience. He was counting on being able to reach the few who would be receptive to music that didn’t rouse their emotions.

But on the night of the performance, unforeseen circumstances made it all but impossible for the symphony to appeal to the intellect.

Part of the problem was the context. The work followed richly orchestrated marches from Nikolai Rimsky-Korsakov’s Golden Cockerel. As soon as the marches were over, the players not involved with Stravinsky’s work left the stage, leaving the twenty wind players in the back rows of the large Queen’s Hall stage, with a lot of empty chairs between them and the distant conductor.

The resulting effect was distracting for the audience and difficult for the conductor.

To conduct or control a group of instrumentalists at such a great distance was an exceedingly arduous task, Stravinsky observed. It was all the more difficult, he added, because the music required particular attention to detail in order to hold the audience’s attention.

In an autobiography published in 1956, Stravinsky came to the conclusion that both his symphony and Koussevitsky were the victims of unfortunate circumstances that no conductor in the world could have made good.