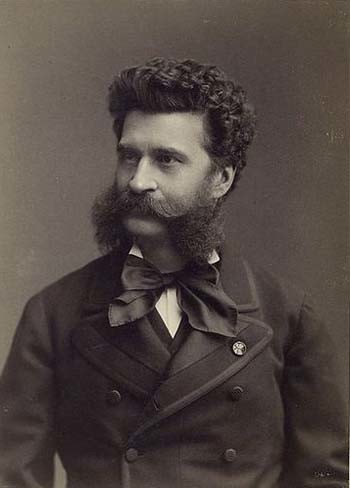 After a grueling concert tour of Great Britain, Johann Strauss had faced a rebellious orchestra and suffered a physical breakdown. After his return to Vienna to recuperate in the winter of 1839, his shattered health and tattered finances gave him no alternative but to lie in his sickbed and hope to recuperate.

One afternoon he heard violin music coming from another room in the apartment. He left his bed and quietly made his way to the sound, a waltz. He eased the door open and watched silently as his fourteen-year-old son Johann fiddled in front of a mirror, giving his performance all the body language that he himself indulged in as he led his band.

Only grudgingly had the father agreed to let his sons take any music lessons at all--on the piano--an instrument suitable for a young man destined to become a banker.

Meanwhile, the son had borrowed one of the father's discarded violins and begun taking secret lessons on it, lessons given by one of the best string players in the father's band.

As young Johann finished his performance and bowed to the acclaim of an imaginary audience, the elder Strauss, boiling over with rage, rushed into the room, snatched the violin from his startled son, and smashed it on the floor.

And the money for the lessons? Where had that come from, Strauss the Elder demanded.

The boy had earned a little cash by giving piano lessons to a neighbor's daughter.

It was a little too ingenious for the father to resist entirely. Both Johann and his younger brother Josef had already shown their musical ingenuity, playing piano four-hand versions of their father's waltzes.

But music for fun was one thing. Becoming the leader of a dance band was something else; and. Father Strauss became all the more adamant that the boy would halt all plans for a musical career and become apprenticed to a banker.

The next day, with the help of his mother, Johann Strauss the Younger, the future Waltz King, secretly appropriated another of his father’s violins.