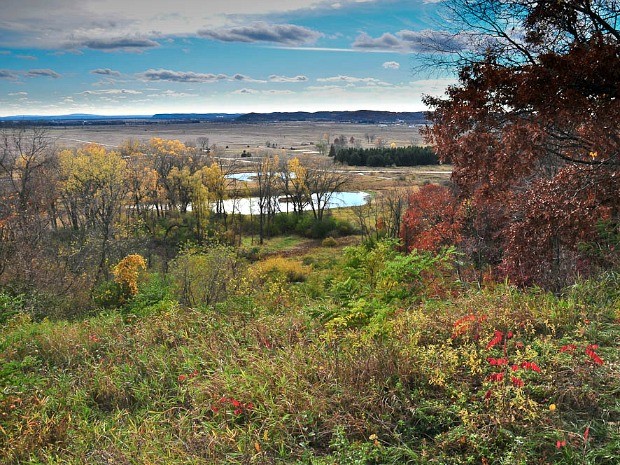 A portion of the former Badger Army Ammunition Plant site is being converted to a state recreation area.

But for most of the time after the U.S. Army acquired the 10,500-acre site in 1941, the plant  was pretty inactive, winding down into "standby" mode between wartime production rushes. Production was stopped in 1975 and the plant designated inactive. During the 1990s, the Army started dismantling the plant's hundreds of buildings, as well as decontaminating and remediating its grounds.

After the Army decided in 1997 that it no longer needed the plant, discussions began about the future of its lands.

Now, the Badger Ammo site is in the midst of a gradual transition into its next chapter, jointly managed by the U.S. Department of Agriculture, the Wisconsin Department of Natural Resources and the Ho-Chunk Nation. One portion administered by the DNR is a public park called the Sauk Prairie Recreation Area. Other successors to the plant's land include the U.S. Department of Agriculture, which operates a research farm on part of the former Badger Ammo site, and the Ho-Chunk Nation, which now owns 1,500 acres of the property.

The transition of the Badger Ammo plant into parkland has taken many years, in part because the federal, state and tribal stakeholders, and advocacy groups like Citizens for Safe Water Around Badger and Sauk Prairie Conservation Alliance, have not agreed on the environmental cleanup of the site, or on what activities should be allowed there.

Over the last 30 years, the Army and Sauk County residents have butted heads over remediating the chemicals the plant released into the soil, groundwater, and Lake Wisconsin. Soil and water samples gathered since the plant close have tested positive for mercury, lead, zinc, chloroform, carbon tetrachloride, dinitrotoluene, trichloroethylene and dioxane, to name a few contaminants dangerous to humans and the surrounding environment. In addition to the chemicals Badger Ammo released in the course of making propellants, the U.S. Environmental Protection Agency and conservation groups have raised concerns that the ongoing demolition of plant buildings and infrastructure would release asbestos and PCBs into the surrounding environment. A nitroglycerin storage bunker, photographed in 2012, was one of hundreds of buildings constructed for the Badger Army Ammunition Plant. Al (CC BY-NC 2.0)

Many Sauk County residents living near the site have dealt with polluted water supplies, and the Army is working on plans to build a new water system for some of them.

In the "Here And Now" report, but the DNR and USDA downplayed environmental concerns, saying the area is safe for recreation. But former Ho-Chunk Nation president Jon Greendeer doesn't consider the issue quite settled.

"I don't think it's pushing the envelope too much to say that the federal government is not done filling in their end of the bargain," he said about environmental remediation efforts. "I don't think you get to wash your hands and say 'You got your land back' and walk away."

The transition has also hit additional sticking points over proposals to allow motorcycling, ATV riding, model rocketry, and even a shooting range in the recreation area. An attorney for the Sauk Prairie Conservation Alliance told Wisconsin Public Radio in September 2015 that he thinks such activities would actually be illegal, due to the terms of a grant the National Parks Service gave the DNR to help with the park.

Currently, the DNR's draft master plan for Sauk Prairie says it will seek a different site for a public shooting range in Sauk the county and provide some limited access to motorcycles in the park.

On a more cooperative note, the USDA has worked with the Ho-Chunk Nation, to restore native plants to the prairie. The Ho-Chunk Nation also hopes to bring back something bigger: the bison that roamed the area before Europeans came to America. The Badger Ammo site also nurtured remarkable wildlife while the plant was still operating: An unusual population of salamanders took up residence in a couple of man-made concrete water reservoirs built for the plant.

The DNR also plans to build some new trails in Sauk Prairie Recreational Area. Some of the plant's internal roads will eventually be converted to trails for hiking, biking, horseback riding, snowshoeing and cross-country skiing. Paul Zajackowski, the DNR's regional park supervisor, told Here And Now that he'd like to do the same with some of the railroad tracks in the park. He pointed out that since it is adjacent to the popular Devil's Lake park area, the state has an opportunity to create a huge area of continuous trails and parkland.

"We're hoping that that can connect the city of Sauk City all the way to Devil's Lake," Zajackowski said. The DNR is still taking public comment on the plan, and is expected to finalize it later in 2016.

Mark Boggess, director of the USDA's Dairy Forage Research Center in Madison, also sees great promise in the site. "I see this place evolving from being essentially ignored and just farmed on into a very dynamic, interactive place where scientists and the public can come and interface and look at the technologies being applied, improvements in water quality, improvements in soil ecology," Boggess told Here And Now.

Even as the details become clearer, the transformation of the former Badger Ammo site is still likely to proceed slowly. As the DNR noted in its draft plan for the property: "It will likely take many decades to fully develop the recreation facilities and opportunities described here."

Editor's Note: A New Wisconsin Prairie Takes Shape At Badger Ammo was originally published on WisContext, which produced the article in a partnership between Wisconsin Public Radio, Wisconsin Public Television and Cooperative Extension.