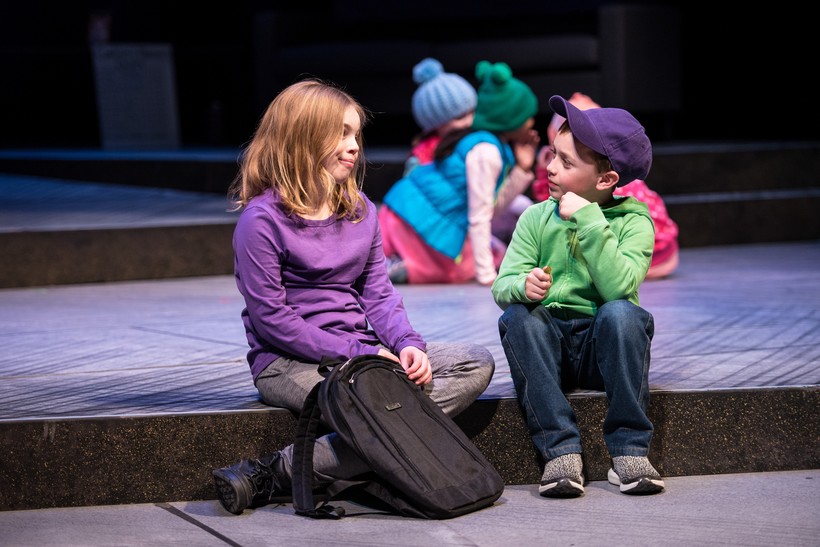 Mattie Olson, 11, on the set of Children's Theater of Madison's "Mockingbird." Mattie plays Caitlin in the show which runs Feb. 22 to March 1, 2020, in Madison. Photo courtesy of Ross Zentner

A new production by Children’s Theater of Madison handles some heavy themes, but it's also a tribute to resilience and healing.

"Mockingbird" is a play by Julie Jensen, based on a novel by Kathryn Erskine. It tells the story of 11-year old Caitlin, an artist on the autism spectrum.

Caitlin's brother Devon is her best friend and helps her navigate the neuro-typical world around her, but she has to adapt when he is killed in a school shooting.

Erica Berman is the director of education and artistic associate with the Children’s Theater of Madison (CTM).

"We feel like it's an extremely timely play, not only with the subject of school shootings, but also in terms of autism, both in our community but also in the world at large," Berman said.

Berman introduced sensory-friendly programming to the theater and collaborated on the theater's Access for All Initiative. The actor who will play Caitlin in most of the performances is on the autism spectrum, like the character. And that was a conscious casting decision.

Megwyn Sanders-Andrews is the Access for All coordinator at CTM. For nearly 20 years she’s worked to engage diverse communities in the arts.

"People with disabilities are really underrepresented in theater, in media, in movies and television," she said. "It's really important to CTM that we that everyone in the community, every young person can see themselves on our stage and that every young person who wants to be a part of our program, our programing, our productions, has that opportunity."

With any type of production, finding just the right actor can be a challenge, especially when you're looking for a middle schooler who is on the autism spectrum. CTM was sure to make accommodations during the audition process including holding auditions at community service agencies like Achieving Collaborative Treatment in Verona, Sanders-Andrews said.

"We offered spaces that might be more comfortable for actors to audition," she said. "We've also had accommodations such as a break space in the studio, and an adapted schedule."

Sanders-Andrews said they hit the jackpot in casting for the lead in "Mockingbird."

"We feel so lucky to have found Mattie to take on the role of Caitlin. She is so engaging onstage," she said.

Mattie Olson is 11 years old and in fifth grade in Madison. She is making her CTM debut as Caitlin, and shared how acting has been a way to make sense of the world around her.

The character of Caitlin goes through a lot in the play, not just because she is on the autism spectrum, but because she's navigating the loss of her brother — whose funeral is part of the production.

Berman described it as "a really difficult thing, no matter whether you are neuro-typical or on the autism spectrum. And then in addition to that, with autism, there's a lot of sensory overwhelm. So not just the emotional side of it, but just all of the senses: a lot of people in your space, a lot of new things, a lot of things that haven't been previewed before, a lot of unpredictability. And all of those can also be challenging."

"I saw some of my would-be reactions in Caitlin. And I also understand her sensitivity and noise," she said, adding, "it's hard to explain, but I feel like I've acted her so much, I know her like she's my sister." 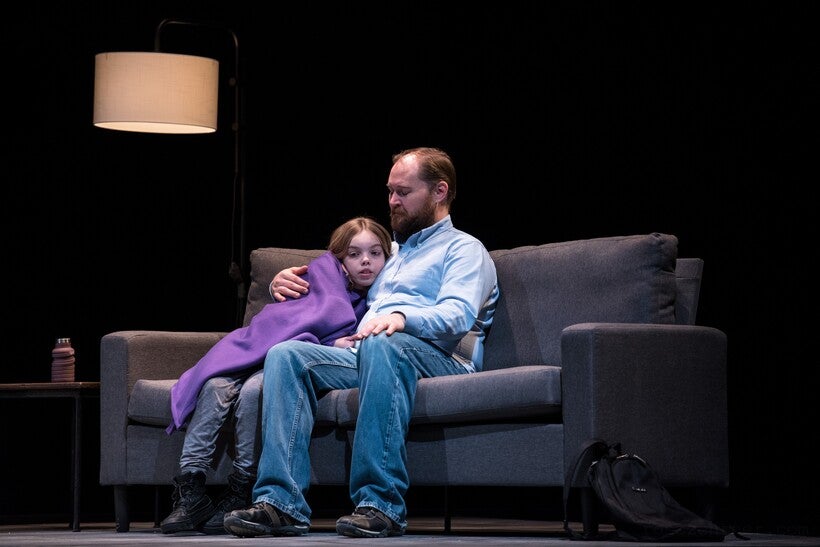 Mattie Olson, 11, acts as Caitlin in a production by Children's Theater of Madison. It runs from Feb. 22 to March 1, 2020. Photo courtesy of Ross Zentner

Mattie has a lot of respect for her character as well.

"Caitlin is on the autism spectrum, and she has many problems in a way, but somehow she overcomes every single one of them. And I admire how she can do that," she said.

Accessibility for all kinds of audience members is not new for CTM.

The theater group works to make the performances of all of their plays accessible to audience members dealing with sensory disorders. Sanders-Andrews said there are sensory kits available that include headphones, sunglasses and fidgets for anyone who could benefit from them. Berman said it allows parents who would like their children to attend along with a typical audience the chance to do so.

In addition, at specific sensory-friendly performances, lighting is adjusted and snacks are even provided. And cast members are trained for what to expect, and how to interact with those audiences in the most positive ways.

As they get ready for the play's opening — which runs from Saturday, Feb. 22 to Sunday, March 1 — Berman thinks it’s a great time to bring it to the public.

"I feel like there is a lot more understanding about autism nowadays," Berman said. "A lot of students and youth we work with are on the autism spectrum or at least have relationships with people who are on the autism spectrum. So this play really encompasses a lot of different aspects of a community and also shows the best of people, people learning to be empathetic, people learning how to grieve things that we all can connect to."

Mattie is hoping a lot of people get to see the play.

"I hope that they will all get their understanding of autism, and feelings, and so many other things. That's my hope," she said, adding, "I hope that if you do see it, you enjoy it. OK. Mattie, aka Caitlin, out."

For more on Mattie, her mom recently presented a TEDx talk about her work and her relationship with her daughter. 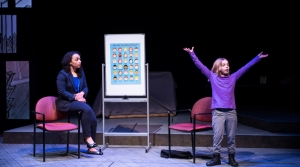 Mockingbird is the story of eleven-year-old Caitlin, an artist on the autism spectrum who has just lost her brother in a tragic school shooting. This week, Children’s Theater of Madison is bringing Caitlin’s story to the stage, starring an actress on the autism spectrum. We learn how the theater is committed to access and representation for those of all abilities.

Representation Of People With Disabilities Down In Hollywood Movies 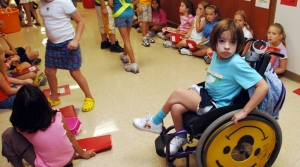 While more than a quarter of U.S. residents live with a disability, representation of people with disabillities in movies is dropping. We talk with an advocate about why it's important to show people with all types of abilities in films and on television.