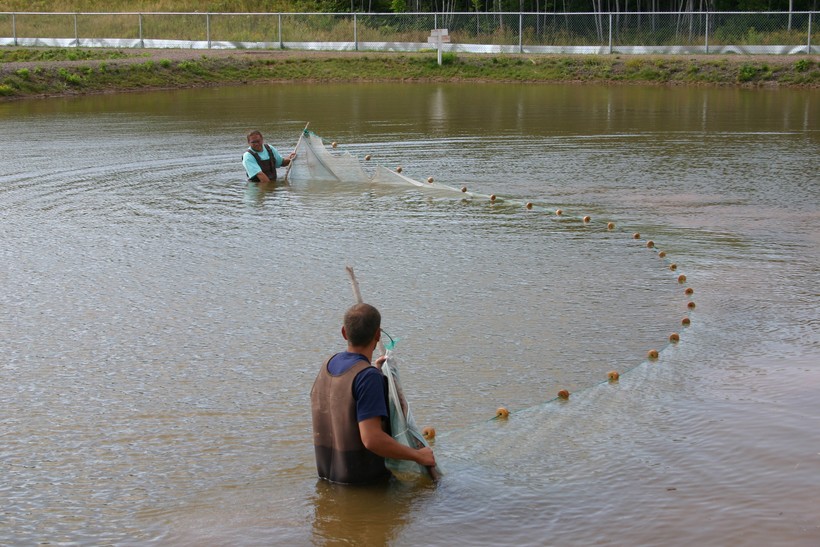 As Oversupply Continues To Weigh Down Other Agriculture Markets, Fish Farming Industry Shows Room For Growth
By Hope Kirwan
Share:

A new report from University of Wisconsin researchers found farm-raised fish is one sector of the state's agriculture industry that's seeing steady demand.

The team surveyed 49 farms in October 2018, representing about half of the state's commercial fish farms. Many of these operations are small, producing less than 20,000 pounds of fish annually. Sixty-one percent of surveyed farms used pond systems to raise their fish, while 37 percent used flow-through systems and 20 percent used aquaponics.

Unlike the oversupply currently affecting dairy and crop producers, researchers found fish farmers have plenty of demand for their product.

"Most of the fish farmers that we spoke with were already selling out of all their fish. So if they had more capacity, they could sell more fish," said Bret Shaw, associate professor of life science communication from UW-Madison and an author of the study. "Some were even ordering in fish from other states and smoking it or processing it."

Shaw said most respondents, who were either the owner or manager of a fish farm, enjoy working in the industry.

Eighty-nine percent of respondents said they farm fish because they have an interest in it, while 57 percent said it provides a better quality of life compared to other work.

"For better or worse, there are quite a lot of regulations and so it might be hard for some people to increase that scale while still honoring the different regulations that are required to protect human health and environmental quality," Shaw said.

Chris Hartleb is a co-author on the study and director of UW-Stevens Point’s Northern Aquaculture Demonstration Facility, which researches and provides information for the fish farming industry.

He said the survey found many farmers are interested in getting more information about how to successfully comply with state regulations.

"Farmers are saying that each year those rules seem to get tighter and tighter and yet they find out about it a little too late," Hartleb said.

Shaw said the industry also needs to do a better job communicating health and safety standards to the public.

He said consumer concerns about the health and sustainability of farm-raised fish are a barrier for the industry.

"For certain (consumers), they’re like, 'Oh, (fish) needs to be wild for me to eat it.' But if you think about that in the context of different agricultural areas, where people would only eat birds that were caught in the wild or would only eat mammals that were caught in the wild, for some reason fish farming gets a different rap than other forms of agriculture," Shaw said. "Those are some biases that need to be considered because if we’re going to enjoy seafood and fish, we’re going to need to produce more of it ourselves."

Hartleb said the industry is also focusing more on sustainability by shifting toward systems that recirculate water.

"Aquaculture in general, even worldwide, is going more toward sustainable food production and things like aquaponics," Hartleb said.

With most fish farms producing at capacity, Hartleb said the growing market presents opportunities for new producers in the state.