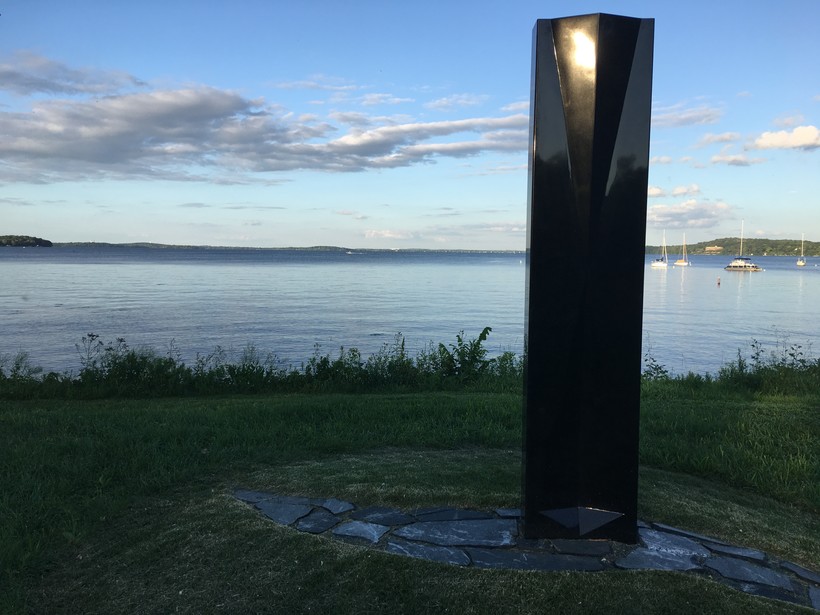 An obelisk in Madison's Marshall Park honors Mildred Fish Harnack, a Milwaukee native who joined the resistance in Berlin against the Nazis during World War II. Brady Carlson/WPR

The city of Madison is unveiling a new sculpture this week to honor Mildred Fish Harnack, a Wisconsin native and a World War II resistance fighter in Germany.

Officials will formally dedicate the obelisk in Madison's Marshall Park, which also holds a city monument honoring those killed in the Holocaust, on Friday. Madison arts program administrator Karin Wolf said the sculpture will honor "the character and the life of somebody who didn't set out to be a hero and was one in spite of herself."

Mildred Fish Harnack was born in Milwaukee and studied at the University of Wisconsin-Madison, where she met her husband, Arvid, an economist born in Germany. The Harnacks moved to Berlin as the Great Depression took hold. Arvid took a job with the German government while Mildred taught and completed her doctorate.

When the Nazis took power in Germany, the couple joined a group of resisters inside the country that passed economic and military information about Hitler's regime to United States and Soviet authorities and distributed anti-Nazi news reports inside Berlin. The Gestapo dubbed the group the "Red Orchestra" because of their Soviet ties and because they named their radio transmitters after musical instruments.

Shereen Blair Brysac, Harnack's biographer, said in a 2011 Wisconsin Public Television documentary that Mildred likely also helped those trying to flee Germany ahead of the Holocaust.

"She had an American passport and she could travel to France and Norway and Denmark. And she seems to have used these connections; it was said, to help Jews escape," Brysac said.

Harnack also tried, as best she could, to keep in touch with relatives overseas, though it became increasingly difficult.

"I feel that some part of literature became a little bit of a code for her," said Ellie Gettinger, education director at the Jewish Museum of Milwaukee. "I found it to be interesting the way she would use her knowledge of literature in terms of being able to maintain communication even once the Nazi regime had come in and she didn't have the ability to be candid any more in letters."

Wolf said that Mildred's family became worried enough about her safety that they bought her a boat ticket back to the U.S.

"She could have come home at any time," Wolf said. "But there was something bigger than her that was compelling her to fight in the way that she could. I just think of that strength of character."

The Red Orchestra continued its work even though U.S. and British authorities showed little interest in it. The Soviets were interested, but in an effort to reach the group, intelligence officials sent a coded radio message to a contact in Belgium with the names and addresses of Red Orchestra members, including Arvid and Mildred Fish Harnack. The Nazis were monitoring the transmission and in the summer of 1942, after decoding the message, they arrested the Harnacks and their fellow resistance fighters.

The Gestapo hanged Arvid Harnack in November 1942. They originally gave Mildred Fish Harnack a six-year prison sentence, but Adolf Hitler personally ordered that she be retried. She was beheaded Feb. 16, 1943, the only American woman executed by the Nazis on his direct orders.

The story of the Harnacks spread after the war ended, but largely in Communist East Germany, which played up the Red Orchestra's ties to Moscow. Historians say the Harnacks were interested in communism after the Great Depression, but were also very skeptical of Soviet leader Josef Stalin’s regime. In the U.S., where U.S. Sen. Joseph McCarthy of Wisconsin and others had made anything related to communism taboo, the Harnacks were little remembered.

"The Cold War really limited who she could be in the United States and in Wisconsin," said Gettinger, "I love that there is a push to reclaim this amazing woman."

The state of Wisconsin passed a law in 1986 to make Mildred's birthday, Sept. 16, Mildred Fish Harnack Day across the state, and directing public schools to teach students about her life.

The ceremony in Madison on Friday morning is also part of that effort.

Artist John Durbrow said the sculpture recognizes Mildred's "strength, courage and resolve to address early on the forces of oppression which eventually inflamed the entire world."

A group of academics representing eight German universities is set to attend the dedication, and there are plans to install a duplicate sculpture at the University of Giessen, where Harnack completed her doctorate.

"The sculpture is positioned in a place where you can look across (the lake) to campus. We thought that was a pretty poetic location" given the Harnacks' connection to UW-Madison, said Wolf.

"They had a profound connection through literature, her Ph.D. was in literature," Wolf said. "That's what inspired and sustained them, the works of Walt Whitman in particular. I just feel them as very real people. They liked to hike, they liked to canoe, they liked being outdoors. And they were confronted with this unacceptable situation, and they did what they felt what they needed to do as moral beings.”

Gettinger agreed, saying the lesson of Mildred's life is to do what's right, even when it's hard.

"None of us, hopefully, are ever going to face the kinds of conditions that Mildred faced," Gettinger said. "But if we can just say, we did what was right in that moment, that's keeping up her standard of excellence."