Wisconsin Is In Better Position Today Than 2008, But Stark Challenges Remain
By Mary Kate McCoy
Share:

For many, memories of the 2008 Great Recession are still fresh in their minds.

And as the coronavirus continues to spread and put much of the economy at a standstill, concerns about the United States falling into yet another painful recession are high.

While there are similarities between the two events, there are notable differences, said Jason Stein, research director at the Wisconsin Policy Forum, which just released a report looking at the state’s financial health amid the coronavirus outbreak.

"They certainly have a similar amount of severity," he said. "In the case of the Great Recession, there you had a financial crisis that was brought on by something really fundamentally wrong with the country."

Whereas today, this economic crisis has struck in an economy that was performing fairly well, he said.

The steps government would typically take to spur demand during a recession — getting money into people’s pockets, cutting taxes, etc. — are essentially moot during a pandemic, when most of the hardest hit businesses are closed.

At the height of the Great Recession, unemployment reached 10 percent of the country’s workforce.

Today, more than 220,000 Wisconsinites have filed for unemployment since March 15 as mass layoffs occurred and the state shuttered all non-essential businesses in efforts to stem the growing threat of COVID-19.

Initial claims for unemployment benefits reached higher than 24,000 Wisconsinites — the highest single day total since the outbreak — on Monday alone.

"(These are numbers ) we have never seen in data in Wisconsin, going back to the 1980s," Stein said. "We know that we are seeing, at least in the speed of it, an economic shock that is truly unusual and truly serious."

Yet there is some good news. Wisconsin is better positioned than it was in 2007 on the edge of the Great Recession, Stein said.

"Wisconsin was arguably one of the least prepared states in the country, particularly when you looked at our short term reserves," he said.

The unemployment insurance fund held roughly $2 billion in 2019 — two and a half or three times more than in 2007, he said. And reserves are at roughly 10 percent of general fund revenue, significantly higher than in 2007 when it sat at less than 1 percent, according to the report.

But those numbers still leave Wisconsin in the middle of the pack compared to other states, Stein said, and while a stronger economy at the outset will help, it may not be enough.

"This is something that is going to wallop every state really hard," he said. "I don't want to leave ... the impression that there won't be a lot of pain and difficult choices because there will be."

Local governments, which rely largely on property taxes, are more stable, Stein said. But the state's revenue, which relies more on income, sales, gas and corporate taxes will take a bigger hit.

With the national $2 trillion stimulus package, Wisconsin could see more than $2.2 billion in aid for the state, Milwaukee County, Dane County and the city of Milwaukee, as well as additional aid including direct payments, greater unemployment benefits and loans and assistance to businesses.

As for whether that’s enough, it’s difficult to predict when so much is dependent on how long the outbreak will last, Stein said.

"I think it remains to be seen, whether it's enough," he said.

Editor's note: An earlier version of this story stated that the $2.2 billion in aid Wisconsin could see from the stimulus package includes direct payments, more unemployment benefits and loans and assistance to businesses. That aid would go to the state, Milwaukee County, Dane County and the city of Milwaukee, the other forms of aid would be in addition to that. 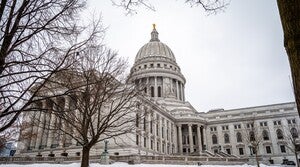 Fears of a recession loom as the COVID-19 outbreak continues nationwide. We talk to a policy analyst about the state of Wisconsin's financial health as the virus continues to spread, and how it compares to the budget before the Great Recession.